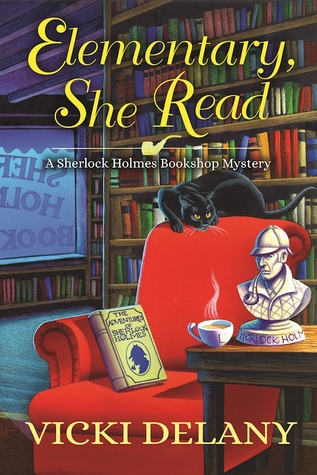 Categories: Cozy Mystery, Reviews
Author: Vicki Delany
Genre: Cozy Mysteries
Series: A Sherlock Holmes Bookshop Mystery
Publisher: Crooked Lane Books
Gemma Doyle, a transplanted Englishwoman, has returned to the quaint town of West London on Cape Cod to manage her Great Uncle Arthur's Sherlock Holmes Bookshop and Emporium. The shop--located at 222 Baker Street--specializes in the Holmes canon and pastiche, and is also the home of Moriarty the cat. When Gemma finds a rare and potentially valuable magazine containing the first Sherlock Homes story hidden in the bookshop, she and her friend Jayne (who runs…

Core characters are Gemma Doyle, distant relative of the esteemed author, co-owner of the Sherlock Holmes Bookshop and Emporium, and partner in the adjoining Mrs. Hudson’s Tea Room.  Gemma, like Holmes, has almost freakish powers of observation and deduction, but unlike Holmes, often is too clever for her own good. Though she has an eye for detail and what appears to be a photographic memory, she’s oblivious in many ways.  There were times I found Gemma to be grating.

Det. Estrada, Ryan’s partner.  Det. Estrada’s immediate dislike of Gemma and her single-minded determination to focus on her was irritating. She wanted so badly for Gemma to be guilty. There doesn’t appear to be a reason other than her disbelief of Gemma’s “ability”.

Moriarty, the bookstore cat. He’s not a fan of Gemma.

Violet, the loving cocker spaniel who waits patiently at home. What a sweetie…

When Gemma finds what appears to be a rare, therefore expensive, magazine hidden in her bookstore, tracking down the author leads to a body; leading to Gemma and Jayne as prime suspects in a murder. For habitual, astute mystery readers the difficulty level will be low, but the writing combined with the appeal of the setting and characters should make up for that.  ELEMENTARY, SHE READ shows real promise. There are a few things that would make the series a definite go to for me.