5-STAR REVIEW: THE SCENT OF A STORM by Annette Oppenlander

Previous article5-STAR REVIEW: BURIED BENEATH by Debbie Baldwin
Next articleBOOK BLAST: THE SCENT OF A STORM by Annette Oppenlander Plus Giveaway!

Eastern Prussia, 1944: Young lovers Annie and Werner are separated from each other when he is drafted into Hitler’s Volkssturm. While the SS orders Werner to remove the dead bodies of frozen refugees from Königsberg’s streets, Annie discovers she is pregnant. As she urgently awaits Werner’s return, rumors of the advancing Red Army mount and with it, alarming reports of what they do to women. Running for their lives, Annie and her mother embark on a life-threatening journey west. Even before they can escape by boat, Annie makes a horrifying mistake, one that will haunt her forever. Werner, arrested and imprisoned in a Russian gulag, manages to escape after four months of cruelty and returns home. But his and Annie’s farms lie abandoned—the love of his life and his own family have vanished…

East Berlin, 1989: On the evening of November 9, when the borders between East and West Berlin open for the first time in nearly thirty years—a day which ultimately heralds Germany’s reunification—Annie watches a correspondent on West TV who reminds her of her childhood sweetheart Werner, the man she has thought dead for 45 years. Together with her daughter Emma, Annie sets out on a search… 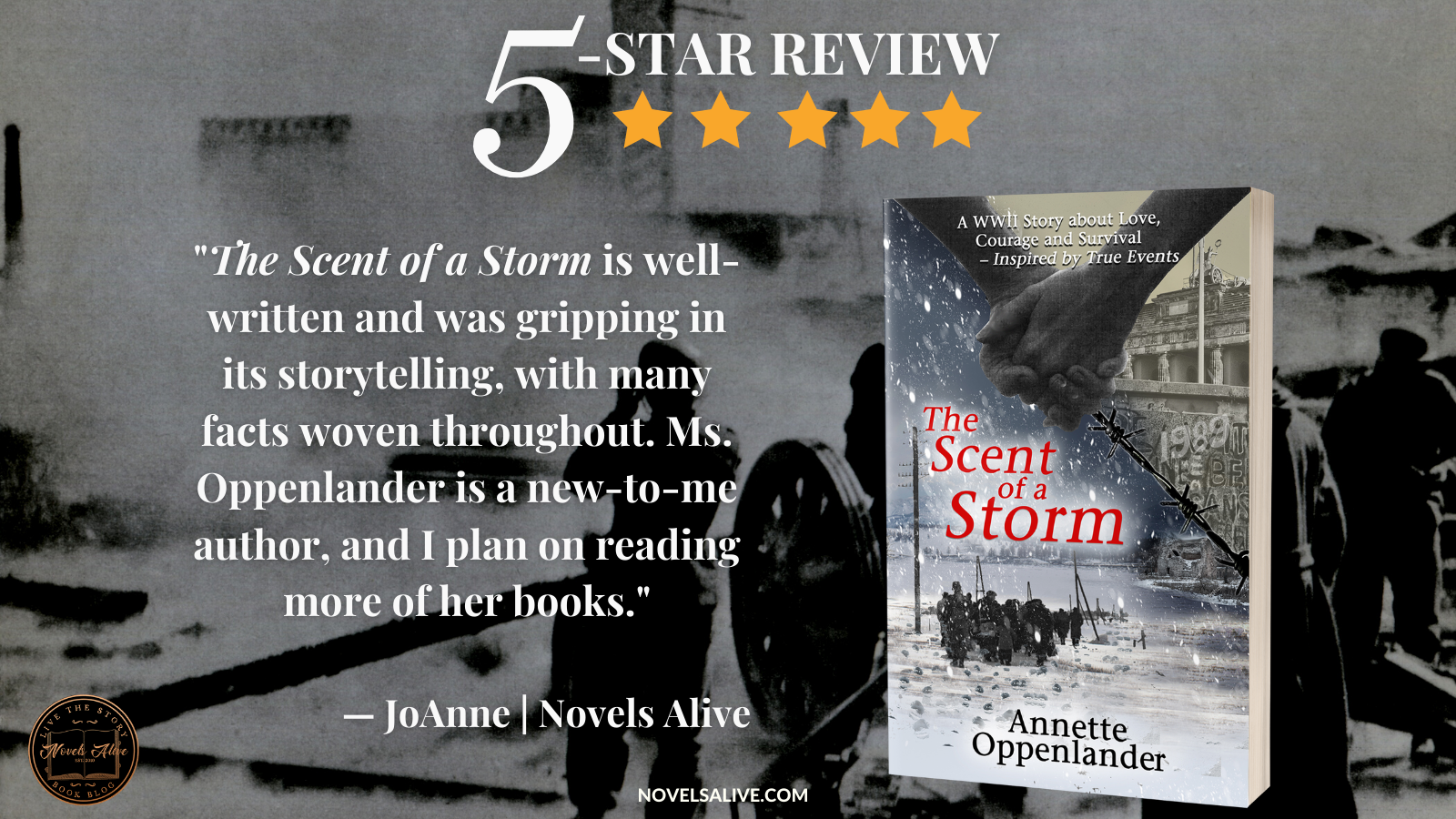 The Scent of a Storm by award-winning Annette Oppenlander is historical fiction inspired by actual events. It’s a novel about World War II and Germany’s involvement but continues through to the fall of the Berlin Wall.

There are core families and characters whom we watch throughout—seeing their growth as well as their downfalls. There is a romance between teens Annie and Werner, who were neighbors and attended school together. They are separated throughout the war, and neither knows what happened to the other.

When their paths cross unexpectedly many years later, it was surreal and seemed like serendipity. Some of the stories are told from Annie’s point of view and some from Werner’s. The characters had a depth to them and also strengths beyond measure.

The story kept my attention from the first page to the last. There was so much emotion packed into the book, and I had tears coursing down my cheeks at various times. I also had to put it down a few times just to get my emotions in check.

It was heartbreaking to learn what happened to some of the characters, their families, their homes, farms, businesses, and horses due to the war. Seeing some as prisoners just because they were German or Jewish was extremely distressing. Their lack of supplies—clothing, food, water, and even places to wash or take care of bodily functions was disturbing. It was interesting to see where help was given to others unexpectedly through various kindnesses and how others were bullies or tyrants. The descriptions were vivid in the number of details and clarity and made pictures in my mind.

The cover was spot on and drew me in as well. There was nice closure and a happily ever after not only due to the breakdown of the communist party. I would have liked the story to continue on just a bit longer. I wasn’t ready for it to end.

The Scent of a Storm is well-written and was gripping in its storytelling, with many facts woven throughout. Ms. Oppenlander is a new-to-me author, and I plan on reading more of her books.

Annette Oppenlander is an award-winning writer, literary coach and educator. As a bestselling historical novelist, Oppenlander is known for her authentic characters and stories based on true events, coming alive in well-researched settings. Having lived in Germany the first half of her life and the second half in various parts in the U.S., Oppenlander inspires readers by illuminating story questions as relevant today as they were in the past.

Oppenlander shares her knowledge through writing workshops at colleges, libraries, festivals and schools. She also offers vivid presentations and author visits. The mother of fraternal twins and a son, she recently returned to her home, Solingen, Germany where she lives with her husband.