Novels Alive  and Be My Bard are over the moon with joy as we welcome New York Times and USA Today Bestselling author Kerrelyn Sparks!

It might have been “Most likely to perform as a tap dancer or mime artist.” My high school drama department had a mime troupe, and I was a member for three years. I also performed in three musicals as a dancer. I definitely had a flair for comedy and drama, which hopefully, continues till this day. I also performed as a dancer in a USO troop that toured VA hospitals and army bases. In addition to the touring, I was in a total of 15 different high school productions, but I never said a word! No one back then would have believed that I now make my living with words.

I have learned over the years that whenever I hit a block in my writing, it’s because I’m trying to force the characters to do something they don’t want to do. So I have to step back and let the characters run the show. If I let the voices in my head be in charge, then the story will move forward. Yes, I realize this makes me sound schizophrenic, but just a little bit. Bwahaha!

Okay… I’ll be Claire Beauchamp and go back to see Jamie Fraser [OUTLANDER]! Who would want to ever come back? The poor guy needs to lose his virginity! I could also picture myself doing the Groundhog Day scenario as Lizzie Bennett. Then I could see Mr. Darcy emerge from that pond over and over, wearing his clingy, wet clothes! With no towel to dry him off, I would have to sacrifice my petticoat, at least [PRIDE & PREJUDICE].

My first historical romance was re-released in a revised edition titled THE FORBIDDEN LADY. Then Avon released the sequel, LESS THAN A GENTLEMAN. It’s possible that I might revise and release some of my other historical romances that were written before the Love at Stake series. Sadly enough, my backlist doesn’t include any other vampire/shifter romances. HOW TO MARRY A MILLIONAIRE VAMPIRE, the first book in the Love at Stake series, was my first vampire romance.

I can’t claim to be as talented as Martha Stewart, but I do enjoy cooking for the holidays. Luckily, my husband and I both come from large families, so I never have to cook the entire meal. When it’s my turn to do the turkey, my husband always helps me cause with our big families, we have to do a really big bird!

I always mention my husband, because he has always believed in me, even when I have doubted myself. I also mention my critique partners who have been with me throughout the entire series and have become my best friends.

I didn’t start in July!! But I try not to wait till the last minute. I started slowly in September with a few presents. I still have a lot more to go!

I have two Love at Stake stories set at Christmas time. The first one was a novella titled A VERY VAMPY CHRISTMAS. It was done as a challenge—just for fun, how many clichéd plot lines could I fit into seventy pages? Quite a few, actually! So we start with Don Orlando de Corazon, the star of a vampire soap opera, As the Vampire Turns. And guess what? He has amnesia, a secret baby, and an evil twin. And he ends up finding true love, discovering he’s a cowboy, and saving the ranch—all in time for Christmas!

The second one is a full-length book, ALL I WANT FOR CHRISTMAS IS A VAMPIRE. It stars one of my Scottish Vamps in a kilt, Ian MacPhie. In search of true love, Ian succumbs to the perils of an online vampire dating service. Unfortunately, he falls for the one girl who is forbidden to him—his mortal bodyguard who has a secret agenda to destroy vampires.

I always resolve to have a healthier lifestyle. I’ve made a lot of progress on that this year, but it will always be a continuing effort.

The sixteenth Love at Stake book will release December 30th! It’s called CROUCHING TIGER FORBIDDEN VAMPIRE and stars Russell as the Vamp and Jia as his were-tiger heroine. Russell is the Marine from the Vietnam War who was discovered in a vampire coma in a cave in Thailand. He was awakened to find himself undead. Not only did he lose his mortality, but in the 39 years he was in a coma, he lost everyone he loved. He wants revenge on the one who caused all his misery—Master Han. Jia wants revenge, too, for Master Han slaughtered her family. Unfortunately, as the nights go by, our hero and heroine find it increasingly hard to focus on hate. Not when love is in the air!

Killing Master Han is my Christmas present for all my readers! With the master villain gone, our merry band of Vamps and shifters will be able to live in peace for a few years while I try my hand at some new projects. To read an excerpt to CROUCHING TIGER FORBIDDEN VAMPIRE, please go to my website at www.kerrelynsparks.com! 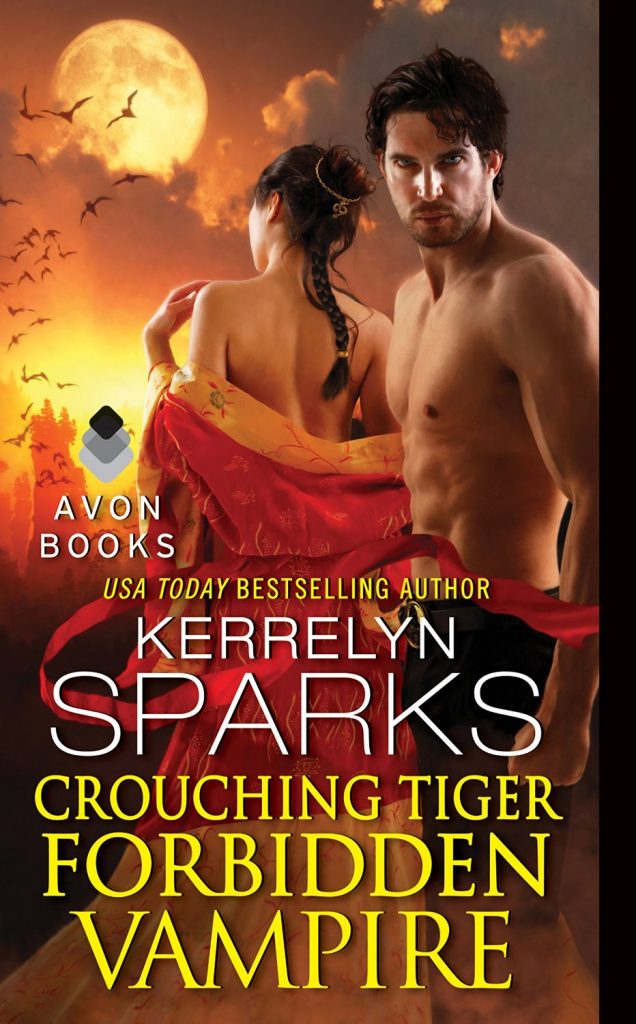 New York Times bestselling author Kerrelyn Sparks delivers the exciting conclusion in the Love at Stake series, where a Marine-turned-vampire finds love with the shifter princess forbidden to him . . .

Russell wakes from a coma to find he’s become a vampire. Now he has a thirst for revenge. Determined to hunt down the master vampire who turned him, he’s used to working alone … until he meets Jia. She is after the same vampire for murdering her parents and insists she can help Russell on this mission.

Reluctantly, he agrees, and sets up some ground rules:

Rule #1: Their partnership is strictly business. If he holds her a little too close . . . if she looks at him with those exotic eyes . . . well, that has to stop.

Rule #2: He’s in charge. Jia isn’t used to taking orders and questions every move he makes. So he stops her the only way he knows how.

Rule #3: Don’t fall in love. But the kiss that was supposed to quiet her awakens something else in him . . . something forbidden. Because Jia is engaged. To someone else.

Leave a comment below for a chance to win a hardback copy of THE VAMPIRE AND THE VIRGIN!

A personal Thank You to Kerrelyn for being so patient. On Thanksgiving my computer was fried and then I got hit with the flu so this interview was postponed from its originally scheduled date. Unfortunately the computer is STILL in the shop, so the formatting is a little off and I wasn’t able to give this posting all the work it deserves. Hopefully the next time Kerrelyn is able to stop in my gremlins will be back in hibernation and leaving my stuff alone!

Merry Christmas and Happy Holiday’s Everyone!

Kerrelyn Sparks’ first paranormal romance, How to Marry a Millionaire Vampire, zoomed out of the bat cave so fast it became Borders bestselling debut romance of 2005. Each book in the Love at Stake series has become a USA Today bestseller. When the fourth book, The Undead Next Door, landed on the New York Times bestseller list, even the Undead sat up and took notice, which made Kerrelyn a bit nervous. She lives in the Greater Houston area with her husband, children, and a house full of garlic. So far, there are no vampires in her family. Werewolves are another matter entirely.

BOOK BLAST: LURED BY THE GHOST RAKE by Marianna Green Plus Giveaway!

INTERVIEW: With Lifelong Actor and Writer Annie Wood Plus Giveaway!