Novels Alive and Be My Bard.com are so pleased to welcome back New York Times and USA Today Bestselling Author, JULIA LONDON.

Thank you for joining us for this 4th edition of “10 Questions With…” Since this new edition begins/began in February it’s only fitting to ask first…When it comes to traditional Valentine’s day gifts would you rather have a big bouquet of flowers or a heart-shaped box of chocolates?

No contest. I would want the heart-shaped box of chocolates. It wouldn’t even have to be heart-shaped. But because I have had many boxes of chocolate in my life, I think I would be better off with the flowers. I really like those, too.

I’ve been, but I can never get enough. I’d like to go back to Scotland. It’s so gorgeous there!

For THE DEVIL TAKES A BRIDE, I think Jennifer Lawrence would be a great heroine. And maybe because I’ve seen ads of him looking all dark and broody recently, but I think Jamie Dornan would make a great Jeffrey.

My best advice is to do it every day, no matter what. Writing is like anything you want to excel at—you have to practice it every day. Probably the worst advice was telling someone not to follow the erotica trend. Ha!

No. People read romance for the happy, optimistic ending. If they want tragedy, then can read commercial fiction. But that’s kind of the deal between a romance writer and her audience. I take license with however I want to get them there, but in payoff is the HEA.

I’ve actually thought about this! Stephen and Maude from English history would be fantastic. Both with legitimate claims to the throne, and the war that is waged for it. I think it would be a blast to write. I may get around to that one day.

Actually, I just did that today. I will be diving right back into a work in progress that is due fairly quickly. But usually, I take a couple of days off and do anything that is not writing!

Isolated mountain cabin. I’d be too cold to venture out and I wouldn’t be scared, so I could concentrate on what I was reading. Haunted castle, no thanks. I’d need friends for that. An abandoned ghost town doesn’t sound like it would have the necessary refrigeration I would require for my snacks, and a tropical island would be too tempting. I’d want to swim or hike or do walk on the beach.

I would want a cross between super resourceful like the guy who has helicopters drop him off in the wilderness, and someone super hot like Bradley Cooper.

THE DEVIL TAKES A BRIDE is about a woman who tries to help her family’s fortunes by trapping a man into marriage—but she manages to trap the wrong man. The man she traps has everything she was hoping for—a title, influence, and money—but he’s got some pretty dark secrets that she has to deal with. He is stricken with OCD, which was an unknown ailment at the time. He thinks he is mad, but now that he’s been thrust into this predicament, he can’t hide any longer.

I also have a new book coming from Montlake, THE PERFECT HOMECOMING (2/24), set in the mountains of Colorado. The heroine of this story has some issues that tend to isolate her…like stealing trinkets from the men she’s been with. She doesn’t understand herself, but she knows she is off. It takes a special guy—Cooper, from the Beyond the Edge series—who figures her out and helps her face what she has become. And in doing so, to figure out where he is going. The heroine is far from perfect in this book, which made it so much fun to write.

I’m working on a new contemporary romance (no pub date yet) and looking forward to the publication of THE SCOUNDREL AND THE DEBUTANTE, which comes out in April. Whew! It’s a busy year! 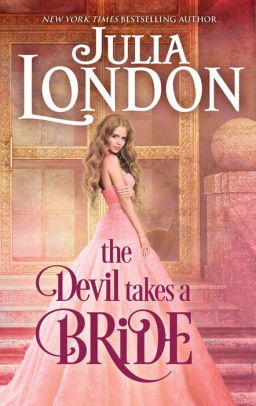 Once the toast of society, Grace Cabot and her sisters now await the shame of losing high status and fine luxuries upon the death of the Earl of Beckington. The dire circumstances are inevitable unless, of course, Grace’s wicked plot to seduce a wealthy viscount into marriage goes off without a single hitch. But once a stolen embrace with the wrong man leads her to be discovered in the arms of Jeffrey, the Earl of Merryton, her plan takes a most unexpected—and scorching—twist.

Governed by routine and ruled by duty, Jeffrey had no desire for a wife before he succumbed to Grace’s temptation. Though his golden-haired, in-name-only bride is the definition of disorder, he can’t resist wanting her in every way. But once her secrets meet his, society might consider their lives to be ruined beyond repair…while Jeffrey might just see it as a new beginning.

Okay, here is the real scoop on Julia London: the official bio looks nothing like who I think is the real me. The unofficial truth is that I was born and raised in rural west Texas. I was a fat baby and typical little girl with Barbies, bikes, and an overactive imagination. I know that I loved to make up stories from a time I can scarcely remember (because my mom has a story I wrote in the first grade, which featured me in an episode of Wagon Train), and I know that I always loved books.

I remember going to the library. It was in an old house and it was very cool inside and smelled like old books. All of the children’s books were on lower shelves for easy access by little hands. I read all the usual stuff: Nancy Drew, Little House on the Prairie, Pride and Prejudice, Little Women… Everything You Ever Wanted to Know about Sex but Were Afraid to Ask (by then I was fifteen or sixteen and was afraid to ask).

In my early teens, I began to dream of great adventure filled notebooks with stories of a girl who looked and spoke like me and was constantly caught up in adventure and peril. She always landed in the arms of hunky guys who happened to resemble a few of my favorite TV stars. Hey, I’m not ashamed to admit it: Starsky and Hutch, Alias Smith and Jones, and yes, even Keith Partridge.

I went to college, I got a job, and when I got a little older, I began to live the real adventures of my life. I traveled to far-flung places and tried things I never thought I’d try. I had good jobs with the federal government and eventually ended up working in the White House, and then later, I came back to Texas and worked as a public administrator until I could take politics no more.

That’s when I decided to turn my penchant for making up stories into books, and I’ll be damned if an agent and a publisher didn’t want to publish my daydreams.

I look back at my life and mark the passage of time by standard measures: bad hair and bad style sense. Or, I can pinpoint where I was and what I was doing in my life by the sports I tried.

Not all of them took, but I discovered I was best at tennis (back in the day), golf (except when it’s too hot, and its always too hot in Texas) and running (sort of a half-walk, half-run. Extremely ugly in appearance, but gets the job done), which I do moderately well.

Along the way I fell in love with a few good dogs and a few good men, and found the ones I want to keep forever.

Sure, there have been those few occasions where I might have drunk too much and did some things I wish I hadn’t, but overall, I have no regrets. I’ve never wanted for anything except the perfect purse (the search continues). In sum, I have been a lucky, lucky girl.

The unofficial truth is that I’ve had two successful careers. I’ve been blessed with a wonderful family and I’ve been lucky in love and work and play. I love my life, I love what I do. I love the people and animals that surround me and I am eager to see what the next half of my life brings.

Now that is a bio that looks like me. ~ www.julialondon.com