One of the very first books to really nurture my love for historical romance was SKYE O’MALLEY, so it is with awe and deep appreciation for the many beautiful stories she has written that Novels Alive and Be My Bard welcome the incomparable…Bertrice Small!

No, I wanted to be an actress back then although I was writing long stories even then.

Lordy, don’t hate me, but I’ve never had a problem. I just sit down and type. I am very fortunate.

While I have read and read and read my whole life, and enjoyed most of what I’ve read, I don’t honestly have a favorite character so this isn’t a question I can really answer. But if I had a favorite, she would probably live somewhere between the 10th and 17th centuries. A short visit would be nice, but I wouldn’t want to remain long. I am a true creature of my own time.

I’m the one who does all the cooking, and it’s very traditional according to my own family. I make great stuffing. There is turkey, sweet potato casserole, mashed white potatoes, French Cut green beans, Mashed turnip, creamed onions, cranberry relish, both apple and pumpkin pies. And of course apple cider for the kids.

My late husband, George, who never questioned the fact that we role reversed at a time when such a thing was unusual, and even considered very odd. We moved from the city to the country with our then 3 year old. I became the one who earned the living. He, while designing and building beautiful clocks which he then sold, also took responsibility for Tom. Our son is now 41, and his dad was one of his best friends until George died 2 years ago. I have always been very proud that I fostered that relationship between father and son.

I actually shop all year though not deliberately. If I see something I know someone on my list will like, I usually purchase it and stick it aside. I’m just practical that way.

No. Holidays have been celebrated in books I’ve read, but nothing that stands out to me.

I don’t make resolutions. I used to when I was younger, but then I realized that we usually conveniently forget what we resolved to do. LOL!

I’m currently working on the last book in my Silk Merchant’s Daughters series. Each sister has had her adventures, and this is the youngest of them who after a bad first marriage flees to England to take refuge with her older, married sister, and get herself involved in the court of King Henry VII. She is the young queen’s favorite lady. The book is titled: SERENA. Your readers can keep up with me at my website which is located at: www.BertriceSmall.net

Thank you so much for inviting me to participate. 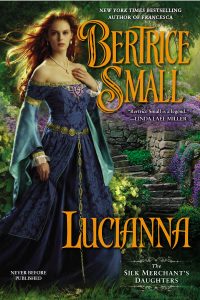 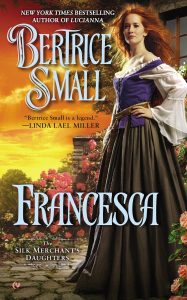 Born in Manhattan, Bertrice Small has lived on eastern Long Island for 37 years, and she loves it! She is a Sagittarian with an Aries son. Her greatest passions are her family; Sylvester and Delilah, the family cats; her garden; her work, and just life in general.

She is the author of 54 novels, with one in production and another almost finished. They will be published in May and October of 2013. 42 of these novels are Historical Romance, 6 are Fantasy Romance, and 6 are Erotic Contemporary. She has also written 4 erotic novellas. Her novels include THE KADIN (pronounced Kah-deen), and the beloved series “The O’Malley Saga” and “Skye’s Legacy”. A New York Times bestselling author, she has also appeared on other bestseller lists including Publishers Weekly, USA Today, and the L.A. Times. She is the recipient of numerous awards including Career Achievement for Historical Romance; Best Historical Romance; Outstanding Historical Romance Series; Career Achievement for Historical Fantasy from RT Book Reviews; a Golden Leaf from the New Jersey Romance Writers chapter of Romance Writers of America; an Author of the Year (2006) and Big Apple Award from the New York City Romance Writers chapter of RWA, and several Reviewers Choice awards from RT Book Reviews. She has a “Silver Pen” from Affair De Coeur, and an Honorable Mention from The West Coast Review of Books. In 2004 Bertrice Small was awarded a Lifetime Achievement Award by RT Book Reviews magazine for her contributions to the Historical Romance genre. And in 2008 she was named by RT Book Reviews along with her friends Jennifer Blake, Roberta Gellis and Janelle Taylor, a Pioneer of Romance.

Bertrice Small is a member of The Authors Guild, Romance Writers of America, and PASIC.