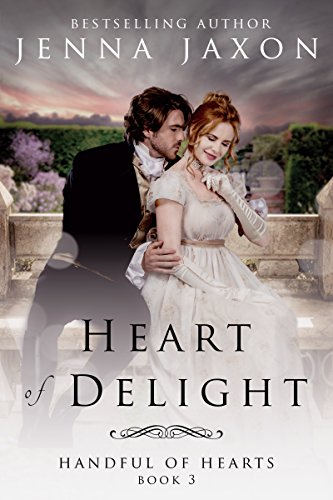 If truth be told, the inspiration for this series, Handful of Hearts, began in 2011 as I was writing a short story to enter in a local writing contest. I was still very new to the writing game, but the contest was free if you were registered, so I figured, what the heck! I penned the little story (2,500 words only!) and sent it in. And low and behold, I won Third Place! Even more phenomenal, the judge, Judi McCoy, wrote on my entry “You have a very good historical voice.”  I was over the moon!

Later, I expanded that story into my first published short story, Heart of Deception. As the years went by, however, I came to feel that the story needed to be lengthened into at least novella length, so when I got my rights back, I put it away with the idea I’d re-publish it as a self-publishing venture “someday.”  Every time I thought about it, however, I kept thinking about how to lengthen and I realized I was thinking more and more about how the hero and heroine met at Lady Hamilton’s ball and wouldn’t it be fun to have other couples who met and fell in love there as well? The name “Handful of Hearts” kept popping up in my mind and I began to play around with other titles for a series. I’d come up with four possible stories, but had no time to write them.

Last fall, however, I realized I needed to release a Christmas book. Heart of Deception’s time didn’t work for a Christmas story, but I had an even shorter story already self-published that was a Christmas story called Tis the Season, about a girl who’s denied her Season because she’s been secretly betrothed to the “boy next door.” I began to expand that short, short story, and needed more characters for the H/h to engage with and suddenly the lightning bolt struck—I could introduce the main character of Heart of Deception as a secondary character in “Tis the Season,” now called A Kiss Beneath the Mistletoe, and use it as a sort of prequel to the series.

So, I got a new Christmas story, my characters got introduced before their own stories, (one character carries throughout the whole series and her book—now number seven—will be the culminating book). I ended up adding two more stories to the series, and I’m having a ball with all these characters who do nothing more than kiss, as these are sweet Regency romances. Heart of Deception was sweet as was Tis the Season, so I thought, especially at Christmas, sweet is a good thing. The series is also dedicated to Judi McCoy, my mentor, my supporter, my friend. I hope she’s proud of me and this series. 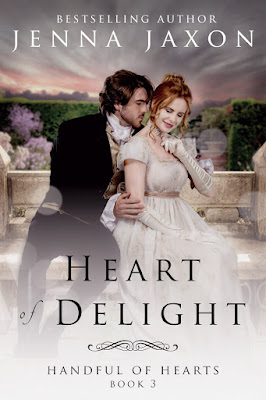 He’ll do anything to be her heart’s delight—except tell the truth.
Gabriella d’Adventure is on a mission. She has come to England as a lady’s maid in pursuit of the Duke of Rother. When she meets Horace Carpenter, valet to a marquess, she is delighted to enlist his aid in gaining her heart’s desire: a meeting with the duke. But will her growing feelings for the handsome valet interfere with her plans for the duke?
The eccentric Marquess of Halford, Hal to his friends, is tired of the demands of Society, especially his father’s decree that he marry this Season. When a breathtaking young woman intrudes on his solitude, he is captivated and introduces himself as his valet in hopes of learning more about her. Despite his fear about the true motive behind Gabriella’s quest to meet the Duke of Rother, Hal agrees to help her gain an audience with him, all the while praying his deception won’t ruin his chances of winning her love.

Jenna Jaxon is a best-selling, multi-published author of historical romance in periods ranging from medieval to Victorian.  She has been reading and writing historical romance since she was a teenager.  A romantic herself, she has always loved a dark side to the genre, a twist, suspense, a surprise.  She tries to incorporate all of these elements into her own stories. She lives in Virginia with her family and two rambunctious cats, Marmalade and Suger.  When not reading or writing, she indulges her passion for the theatre, working with local theatres as a director.  She often feels she is directing her characters on their own private stage.

She has equated her writing to an addiction to chocolate because once she starts she just can’t stop.