5-STAR REVIEW: A TRACE OF DECEIT by Karen Odden 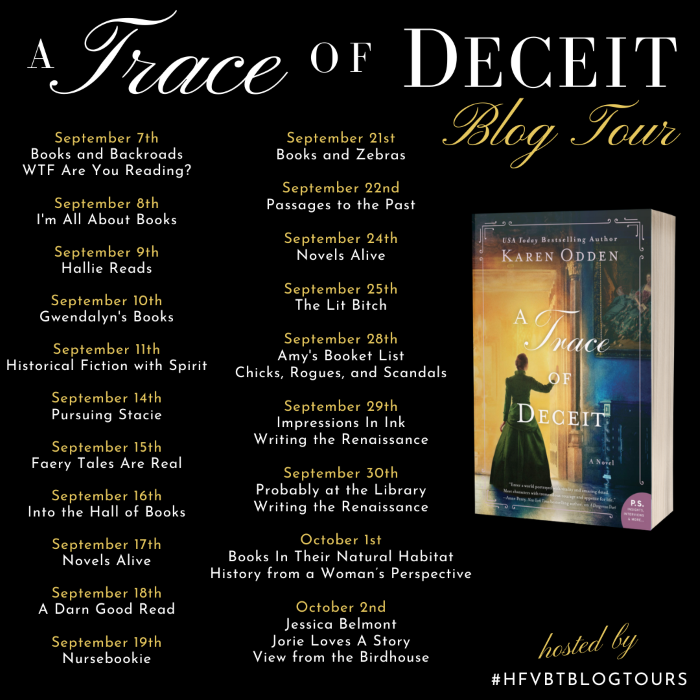 From the author of A Dangerous Duet comes the next book in her Victorian mystery series, this time following a daring female painter and the Scotland Yard detective who is investigating her brother’s suspicious death.

Edwin is dead. That’s what Inspector Matthew Hallam of Scotland Yard tells Annabel Rowe when she discovers him searching her brother’s flat for clues. While the news is shocking, Annabel can’t say it’s wholly unexpected, given Edwin’s past as a dissolute risk-taker and art forger, although he swore he’d reformed. After years spent blaming his reckless behavior for their parents’ deaths, Annabel is now faced with the question of who murdered him—because Edwin’s death was both violent and deliberate. A valuable French painting he’d been restoring for an auction house is missing from his studio: find the painting, find the murderer. But the owner of the artwork claims it was destroyed in a warehouse fire years ago.

As a painter at the prestigious Slade School of Art and as Edwin’s closest relative, Annabel makes the case that she is crucial to Matthew’s investigation. But in their search for the painting, Matthew and Annabel trace a path of deceit and viciousness that reaches far beyond the elegant rooms of the auction house, into an underworld of politics, corruption, and secrets someone will kill to keep.

This is the second book I’ve read from Karen Odden, and she has quickly become one of my fav-or-ite authors.

I love Karen’s just right attention to detail without bogging the reader down with tiny inconsequential minutia that serves only to put the reader to sleep. One of the many reasons I love Historical Fiction is that I feel I have learned something and am entertained, as well. Ms. Odden does this seamlessly. Reading A Trace of Deceit was like attending a mini-art appreciation class, with murder and mayhem thrown in to make it a great whodunit.

Annabelle is the unconventional protagonist who is a young painter learning her craft at the formerly male-only, famed Slade School of Arts in London. When her ne’er-do-well brother Edwin is found murdered, she sets out, along with her friend from Scotland Yard, Inspector Matthew Hallam, to find out who killed him and what happened.

Edwin was once a promising artist but squandered his life and his talent away, but after a stint in prison for forgery, Edwin swore he was finally on the straight and narrow. Much as Annabelle had hoped Edwin had changed, she was skeptical and would always blame him for the death of their parents.

Ms. Odden masterfully weaves the myriad emotions Annabelle feels after Edwin’s murder—grief, guilt, anger, sentimentality—and takes the reader along for the ride as Annabelle reconciles those feelings and finally comes to acceptance and peace.

The steps to clear Edwin, find his murderer, and take a deep dive into the underbelly of the Victorian black market art world kept me reading late into the night. The twists and turns all made perfect sense, and no loose ends weren’t tied up (which is a personal pet peeve of mine).

I loved the chemistry between Annabelle and Inspector Hallam. They truly worked together as a team, and I adore how Matthew treats Annabelle as an equal yet with respect and deference. He admires her intellect, her courage, and tenacity, and she, his commitment, strength, and daring. I hope this team continues in future books because they are perfect in my book.

With multi-faceted characters, well-developed plots, an intricate mystery, all wrapped up in a tight little package, A Trace of Deceit is everything a Victorian mystery suspense should be.

*I received an ARC from the publisher in exchange for an honest review. 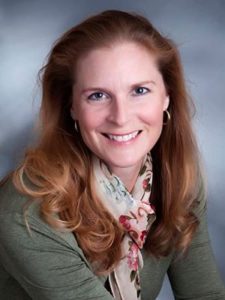 Karen Odden received her Ph.D. in English literature from New York University, writing her dissertation on Victorian literature and culture. While teaching at the University of Wisconsin-Milwaukee, she contributed essays to books and journals, including Studies in the Novel, the Journal of Victorian Culture, and Victorian Crime, Madness, and Sensation. She has written introductions for Barnes and Noble editions of books by Dickens and Trollope; and she edited for the academic journal Victorian Literature and Culture. She freely admits she might be more at home in nineteenth-century London than today, especially when she tries to do anything complicated on her iPhone. Her first novel, A Lady in the Smoke, was a USA Today bestseller and won the New Mexico-Arizona 2016 Book Award for e-Book Fiction. Her second novel, A Dangerous Duet, about a young pianist who stumbles on a crime ring while playing in a Soho music hall in 1870s London, won the New Mexico-Arizona 2019 Book Award for Best Historical Fiction. A Trace of Deceit, set in the 1870s London art world, is her third novel. A member of Mystery Writers of America and Sisters in Crime, Karen resides in Arizona with her family and a ridiculously cute rescue beagle named Rosy.

Monday, September 7
Review at Books and Backroads
Review at WTF Are You Reading?

Tuesday, September 8
Feature at I’m All About Books

Wednesday, September 16
Review at Into the Hall of Books

Tuesday, September 22
Review at Passages to the Past

Tuesday, September 29
Review at Impressions In Ink
Review at Writing the Renaissance

Wednesday, September 30
Review at Probably at the Library
Guest Post at Writing the Renaissance

Thursday, October 1
Excerpt at Books In Their Natural Habitat
Review at History from a Woman’s Perspective

Friday, October 2
Review at Jessica Belmont
Review at Jorie Loves A Story
Review at View from the Birdhouse

5-STAR REVIEW: A TRACE OF DECEIT by Karen OddenWith multi-faceted characters, well-developed plots, an intricate mystery, all wrapped up in a tight little package, A Trace of Deceit is everything a Victorian mystery suspense should be.