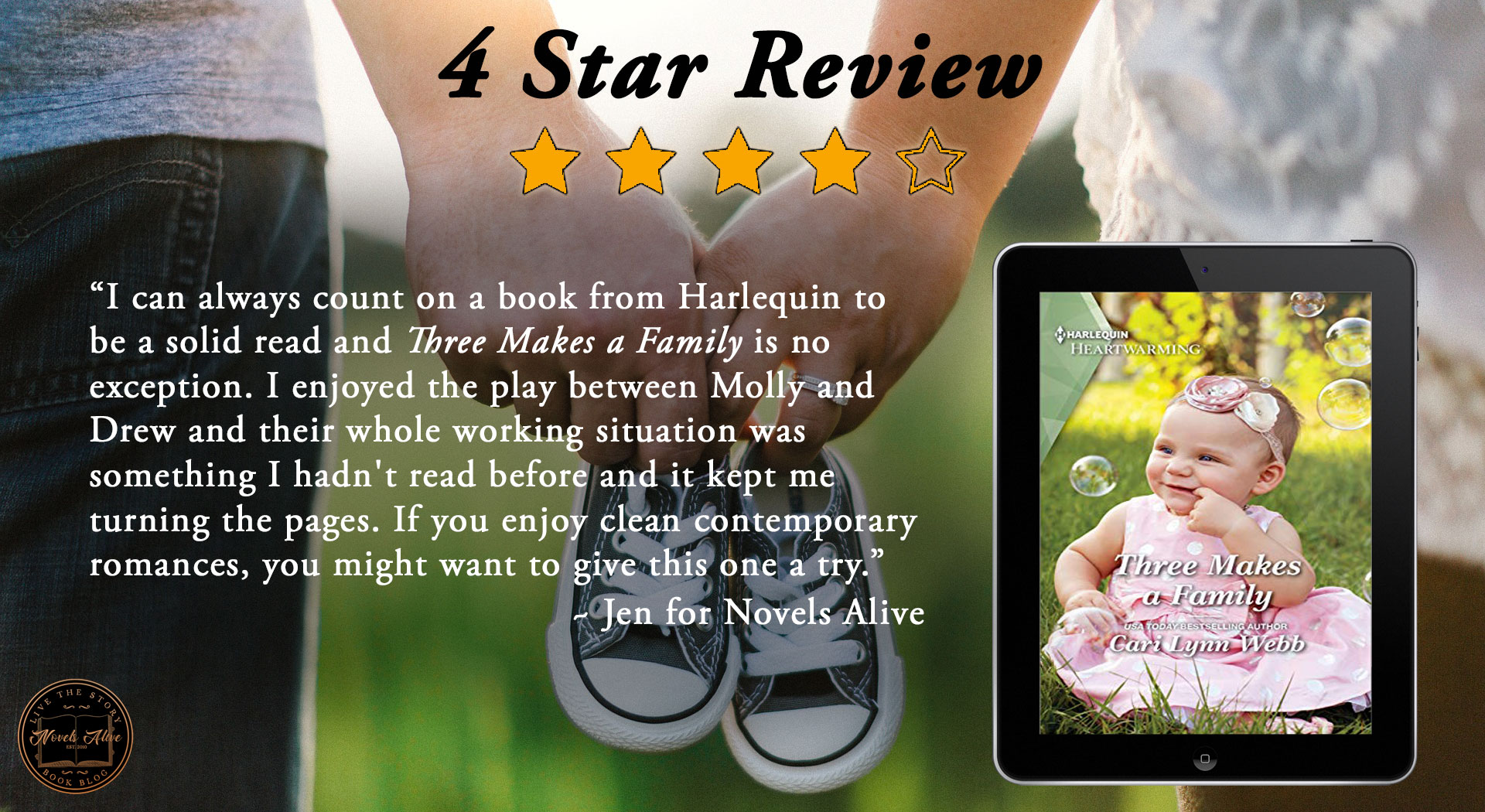 Can love for a child…
Make them a family?

Lawyer Molly McKinney needs to be the best—now more than ever. Relocating to San Francisco means a chance to provide a stable income and home for her nine-month-old daughter. And defending former rival Drew Harrington against charges of witness tampering will boost her reputation. As they work to clear Drew’s name, their feelings grow. But does Molly have room in her life for love?

Three Makes a Family is the seventh book in Cari Lynn Webb’s City by the Bay series, but it stands alone quite well. I haven’t read any of the other books in the series and I couldn’t tell that it was part of a series, except for this faint feeling that some of the other couples that showed up in the story may have already had their stories told. And I was quite appreciative of that fact.

This book follows Molly and Drew. They were the best of friends in college and then after both getting their law degrees they went their separate ways. Neither knew the other had feelings for the other and when they cross paths about ten years later, they fall back into their friendship. Molly is trying to help Drew clear his name and they keep crossing that professional line, especially since Molly’s daughter is in the mix and Molly is also growing close to Drew’s friends and family.

I went into this book kinda skimming the blurb and for some reason thought it was a secret baby story, maybe because I knew a child was involved and it was a reunion story. It’s not… which I’m thankful for since I’m not the biggest fan of the secret baby storyline, but I do love second chance stories. That said, Hazel, Molly’s infant daughter, does play a pretty big role in the story.

I can always count on a book from Harlequin to be a solid read and Three Makes a Family is no exception. I enjoyed the play between Molly and Drew and their whole working situation was something I hadn’t read before and it kept me turning the pages. I’m also curious enough about Drew’s friends and family that I’m going to go back and find the prior books in the series to get a little more background. If you enjoy clean contemporary romances, you might want to give this one a try. 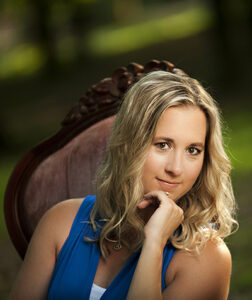 A non-stop flight from Honolulu to Chicago. A quick stop at the airport bookstore and Cari Lynn Webb discovered her love for romance. She cannot recall the book she bought, but she does remember finishing it somewhere over California, feeling pleased the murderer had been arrested (justice had prevailed). But frustration reigned as Cari searched for a hidden chapter or missed epilogue that would show the heroine and the FBI agent she’d fallen in love with living their happily-ever-after. (Surely love conquered all.) Except not in that particular book. Another trip to the bookstore in her grandparents’ hometown and Cari discovered an entire section of books dedicated to the happily-ever-after. There she found Kathleen Woodiwiss, Judith McNaught, and then Nora Robert … and she became a life-long romance reader.

Cari’s passion for reading had not dimmed years later when she found herself newly married and inside another bookstore during her lunch break. But the shelves of happily-ever-afters surrounding her couldn’t stem her frustration at not being able to find a new historical romance (Amazon wasn’t the household name it would become). So like any dedicated reader, Cari drove back to work, opened a word document, and began to write the historical she wanted to read. Months later, she printed the manuscript, presented it to her husband, and asked if she should pursue acting or continue writing. With her husband’s full support, she continued writing… and now she feeds her passion for romance with a stack of to-be-read paperbacks in her nightstand, multiple downloads on her kindle, and her own stories.

Cari believes in the power of love simply because she’d grown up surrounded by true love. She remembers her grandparents holding hands when she visited them as a kindergartner and still holding hands when her grandmother whispered her final goodbyes to her grandfather after 70 years together. Cari’s parents have been married over 50 years. And Cari is blessed to have married her own hero. She will be the first to tell you that true love isn’t always sweet and perfect, it can be challenging, complicated, and risky. But in the end, there is nothing more worth fighting for.

Wishing all of you, your very own happily-ever-after…

I can always count on a book from Harlequin to be a solid read and Three Makes a Family is no exception. I enjoyed the play between Molly and Drew and their whole working situation was something I hadn't read before and it kept me turning the pages. I'm also curious enough about Drew's friends and family that I'm going to go back and find the prior books in the series to get a little more background. If you enjoy clean contemporary romances, you might want to give this one a try.4 STAR REVIEW: THREE MAKES A FAMILY by Cari Lynn Webb