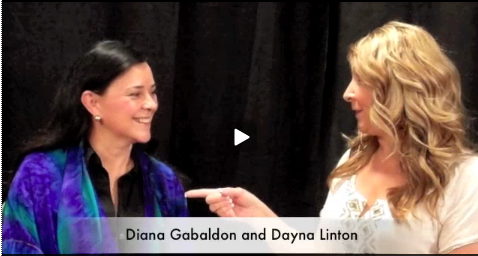 Talented, beautiful, witty, intelligent and gracious are just a few of the words that come to mind when describing internationally acclaimed and #1 New York Times Bestselling author, Diana Gabaldon. From the age of eight, Diana knew she would one day become a writer, but first she forged a successful scientific career, acquiring degrees in Zoology, Marine Biology and Quantitative Behavioral Ecology. As a university professor, she had a multitude of non-fiction works published before becoming known as the magical, masterful storyteller she is today. Her Outlander Series has captured the heart of millions worldwide.

Through Diana’s newest release, THE EXILE, she puts an exciting, new spin on her original Outlander book by telling the story from the beloved character Jamie Fraser’s point of view, in the form of a graphic novel, gorgeously illustrated by Hoang Nguyen!

[quote]In THE EXILE, readers find young Jamie Fraser returning to Scotland after a long absence. Though his beloved godfather, Murtagh, promised Jamie’s late parents he’d watch over their brash son, making good on that vow will be no easy task. There’s already a fat bounty on the young exile’s head, courtesy of Captain Jonathan “Black Jack” Randall, the sadistic British officer who’s crossed paths—and swords—with Jamie in the past. In the court of the mighty Clan MacKenzie, Jamie is a pawn in the power struggle between his two uncles, the aging Clan Chieftain, Colum, who demands his nephew’s loyalty—or his life—and Dougal, a proven warrior, who’d sooner see Jamie dead than anointed Colum’s heir.[/quote]

Then there is Claire Randall, an involuntary time traveler, suddenly thrust into Jamie’s life. Claire —mysterious, beautiful, and strong-willed—finds herself saving Jamie’s life and arousing his desire.

But even as Jamie’s heart draws him to Claire, Murtagh is certain she’s been sent by the “Auld Ones,” and Captain Randall accuses her of being a spy. Claire clearly has something to hide, though Jamie can’t believe she could put him any danger. Still, he knows she is torn between two choices–a life with him, and whatever it is that draws her thoughts elsewhere.

Step into the captivating, passionate, and suspenseful world of THE EXILE, and experience the storytelling magic of Diana Gabaldon as never before.

DREAM…
If you have yet to read the Outlander Series, then you must take your heart and mind on a journey like no other and start at the very beginning of Claire and Jamie’s story, with Book One, OUTLANDER:

“The year is 1945, Claire Randall, a former combat nurse, is back from the war and reunited with her husband on a second honeymoon—when she innocently touches a boulder in one of the ancient stone circles that dot the British Isles. Suddenly she is a Sassenach—an “outlander”—in a Scotland torn by war and raiding border clans in the year of our Lord…1743.

Hurled back in time by forces she cannot understand, Claire’s destiny in soon inextricably intertwined with Clan MacKenzie and the forbidden Castle Leoch. She is catapulted without warning into the intrigues of lairds and spies that may threaten her life…and shatter her heart. For here, James Fraser, a gallant young Scots warrior, shows her a passion so fierce and a love so absolute that Claire becomes a woman torn between fidelity and desire…and between two vastly different men in two irreconcilable lives.

Claire Randall is leading a double life. She has a husband in one century, and a lover in another…”

Book Two, DRAGONFLY IN AMBER, finds Claire once again swept back in time to the drama and passion of 18th-century Scotland…

“For twenty years Claire Randall has kept her secrets. But now she is returning with her grown daughter to Scotland’s majestic mist-shrouded hills. Here Claire plans to reveal a truth as stunning as the events that gave it birth: about the mystery of an ancient circle of standing stones …about a love that transcends the boundaries of time …and about James Fraser, a Scottish warrior whose gallantry once drew a young Claire from the security of her century to the dangers of his…

Now a legacy of blood and desire will test her beautiful copper-haired daughter, Brianna, as Claire’s spellbinding journey of self-discovery continues in the intrigue-ridden Paris court of Charles Stuart …in a race to thwart a doomed Highlands uprising …and in a desperate fight to save both the child and the man she loves…”

“Their passionate encounter happened long ago by whatever measurement Claire Randall took. Two decades before, she had traveled back in time and into the arms of a gallant eighteenth-century Scot named Jamie Fraser. Then she returned to her own century to bear his child, believing him dead in the tragic battle of Culloden. Yet his memory has never lessened its hold on her… and her body still cries out for him in her dreams.

Then Claire discovers that Jamie survived. Torn between returning to him and staying with their daughter in her own era, Claire must choose her destiny. And as time and space come full circle, she must find the courage to face the passion and pain awaiting her…the deadly intrigues raging in a divided Scotland… and the daring voyage into the dark unknown that can reunite—or forever doom—her timeless love.”

In Book Four, DRUMS OF AUTUMN, not only does the reader get to continue the story of Claire and Jamie, but of the next generation!

[quote]”It began in Scotland, at an ancient tone circle. There, a doorway, open to a select few, leads into the past – or the grave. Claire Randall survived the extraordinary passage, not once but twice. Her first trip swept her into the arms of Jamie Fraser, an eighteenth-century Scot whose love for her became a legend—a tale of tragic passion that ended with her return to the present to bear his child. Her second journey, two decades later, brought them together again in the American colonies. But Claire had left someone behind in the twentieth century—their daughter, Brianna….

Now Brianna has made a disturbing discovery that sends her to the circle of stones and a terrifying leap into the unknown. In search of her mother and the father she has never met, she is risking her own future to try to change history … and to save their lives. But as Brianna plunges into an uncharted wilderness, a heartbreaking encounter may strand her forever in the past … or root her in the place she should be, where her heart and soul belong…[/quote]

In Book Five, THE FIERY CROSS, Claire Randall, now firmly ensconced in the past with her daughter, Brianna, and Brianna’s Scottish husband, Roger, finds herself and her dashing husband, Jamie, at a critical juncture.

[quote]”It is 1771, and the first stirrings of the American Revolution are being felt in the mountains of North Carolina where Jamie, despite being a Catholic, has been given an enormous tract of land by the governor and is ordered to raise a militia. Having learned about the Revolution from his 20th-century wife and daughter, Jamie uneasily complies with the governor’s orders and is immensely relieved when the crisis passes and the militia is disbanded. Both he and the reader know, however, that this reprieve is only temporary.”[/quote]

Book Six, A BREATH OF SNOW AND ASHES finds Jamie and his family living on Fraser’s Ridge, at the dawn of a new era, about to witness, first-hand, the birth of a new nation.

“The year is 1772, and on the eve of the American Revolution, the long fuse of rebellion has already been lit. Men lie dead in the streets of Boston, and in the backwoods of North Carolina, isolated cabins burn in the forest.

With chaos brewing, the governor calls upon Jamie Fraser to unite the backcountry and safeguard the colony for King and Crown. But from his wife, Jamie knows that three years hence the shot heard round the world will be fired, and the result will be independence — with those loyal to the King either dead or in exile. And there is also the matter of a tiny clipping from The Wilmington Gazette, dated 1776, which reports Jamie’s death, along with his kin. For once, he hopes, his time-traveling family may be wrong about the future.”

In Book Seven, AN ECHO IN THE BONE, readers continue the fantastical journey through time as they travel vicariously through Claire and Jamie to Colonial America.

“Jamie Fraser knows from his time-traveling wife Claire that, no matter how unlikely it seems, America will win the Revolutionary War. But that truth offers little solace, since Jamie realizes he might find himself pointing a weapon directly at his own son-a young officer in the British army. And Jamie isn’t the only one with a tormented soul- for Claire may know who wins the conflict, but she certainly doesn’t know whether or not her beloved Jamie survives.

Epic in scope and featuring a colorful cast that includes many legendary figures-including hero-turned-traitor Benedict Arnold and bawdy statesman Benjamin Franklin —AN ECHO IN THE BONE is a thrill from start to finish.”

CREATE…
The Outlander Series is a literary journey into the past that one will never forget. The characters of Jamie and Claire stay close to the reader’s heart, like dear friends that have moved away. Unbelievably rich with detail and deeply passionate, Diana tells a unique story of enduring love, with all the joy, laughter and heartaches woven into the luscious tapestry of history during a time when the courage and bravery of a few changed the world for everyone.

On a side note, it is not uncommon for readers to find themselves yearning for more upon completing this extraordinary series. After reading these books, it is difficult for one to find reading material as “hearty and satisfying.” In this instance, it is strongly suggested that one check out Ms. Gabaldon’s non-fiction work, THE OUTLANDISH COMPANION, which gives you a glimpse [quote]“behind the curtain” as she reveals her exhaustive research process, intriguing details behind the series and her journeys – figuratively and literally – in giving her characters their “voice.”[/quote]

Also, OUTLANDER has generated a “spinoff” known as the Lord John Series. In the “Lord John” books, readers are treated to the lively adventures of “Lord John Grey.” John Grey first met Jamie Fraser as an adversary, but evolved into being one of Jamie’s most trusted and loyal friends.

Finally, (and this is the best part) BOOK EIGHT is in the works! We look forward to relaying more details as they are released by Diana!