Today we are very pleased and excited to welcome USA Today Bestselling Author, CAROLINE LINDEN to Novels Alive and Be My Bard as she answers “10 Questions With…”

We’ve all pondered the age old question of which came first the CHICKEN or the EGG?  As a writer, when creating a new story, which tends to come first for you—the CHARACTERS or the PLOT?

Definitely the characters, almost always. Sometimes a bit of the plot will come to me and I need to figure out how/if I can make it work with my characters, but often the plot springs very much from the characters.

Ha! My kids would probably say the villainous mastermind, because I control the wifi password around here. But I believe everyone should be the heroine of her own story, so that’s what I would be: the calm, practical, capable heroine marveling at how everyone around her can be so crazy and eccentric. Then I would go away, all the better to enjoy the tearful reunion as my family admits they would fall to pieces without me (or at least have no food or clean clothes).

I think my preference is the villain who seems evil but turns out to have some redeeming qualities and motivations. Pure evil is too easy to hate.

Probably PERSUASION, by Jane Austen. It’s my favorite of hers, and it’s set in Bath, an unbelievably beautiful city.

If Han Solo would lead me by the hand into the engineering works of the Millenium Falcon and kiss me instead of fixing the hyperdrive, I would faint with happiness.

No, not really. Those are still the most difficult scenes to write, for the most part, because it’s not just about what kinky act you can describe, it’s about the characters baring themselves and sharing something truly intimate with each other. Whether they are using whips and bondage or just missionary position, what really makes a sex scene work is the emotional connection between the participants. Of course, it’s always nice to have more freedom in writing what would best suit the characters, so even though it hasn’t really changed my own writing much, I’m very much in favor of there being less ‘taboo’ in general.

I still firmly believe that reviews are for readers. I appreciate, tremendously, every positive review (and I do read many of them), but I also think people should be able to express disappointment or disapproval; as much as I try to write a good book and hope readers will enjoy it, not everyone will, and that’s normal. Every now and then someone will write a review that makes me wonder if they even read my book (wrong names, complaints about things that didn’t happen in the story) but what can you do? Sometimes reviewers will point out something I never knew, or never noticed, and I try to take those into account in future books. One woman wrote me early on to correct my capitalization of titles, which was very helpful. I’m always glad to learn something that will improve my work.

Definitely! I will always love historical fiction, but lately I’ve been working on a contemporary idea. I also have a few young adult/new adult stories in mind. It would be nice to write something my children could read.

Ah, too hard to choose. All of my books are like movies in my mind—I can see and hear the characters. But it would be equally awesome to see any of my favorite historical romances made into films. There need to be more historical romantic films, period, in my opinion. 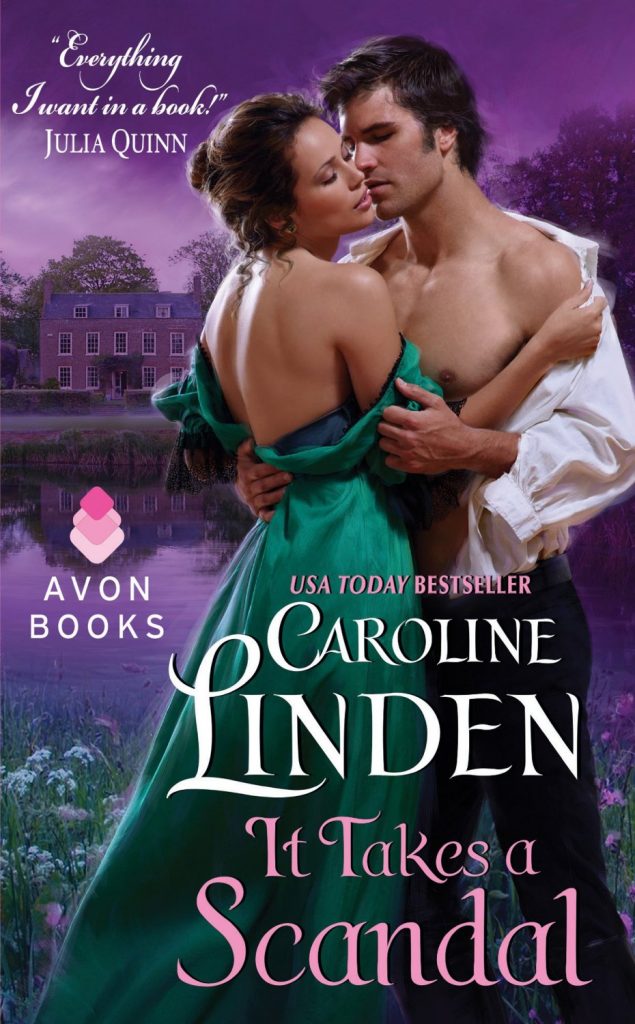 My next book, IT TAKES A SCANDAL, is about an heiress who falls in love with a man who’s lost everything. I really like writing heroes who aren’t Lord of All They Survey, and this hero, Sebastian, is very down on his luck. His father went mad and ruined his estate, then disappeared, and people suspect Sebastian killed him. When Sebastian meets Abigail, he knows he should stay far, far away from her…but he can’t, especially not when she wants to get to know the real him. Sebastian has built a wall of indifference around himself, and Abigail  looks past all the rumors and gossip and sees the honorable decent man inside. Unfortunately, everyone else disapproves and Abigail must face some very hard choices if she wants to be with him.

There’s a special bonus offer for IT TAKES A SCANDAL. If you buy/order it before 5/6 and submit proof of purchase, you can get three issues of 50 Ways to Sin (the very first plus the two issues Joan reads in LOVE AND OTHER SCANDALS). Abigail in IT TAKES A SCANDAL is still fascinated by these stories, and they play a part in the story. Here’s the link to the submission form:

IT TAKES A SCANDAL

LOVE AND OTHER SCANDALS

CAROLINE LINDEN was born a reader, not a writer. She earned a math degree from Harvard University and wrote computer code before discovering that writing fiction was far more fun. Eleven years, fourteen books, three Red Sox championships, and one dog later, she has never been happier with her decision. Her books have won the NEC-RWA Reader’s Choice Beanpot Award, the Daphne du Maurier Award, and RWA’s RITA Award.