Novels Alive is honored to have with us for this week’s “10 Questions With…”, the fabulously talented, ANNA CAMPBELL!

Read to the end to end and leave a comment to be entered to win a copy of SEVEN NIGHTS IN A ROGUE’S BED!

Hi Teresa! Thanks so much for having me as your guest today! Great questions.

We’ve all pondered the age-old question of which came first the CHICKEN or the EGG? As a writer, when creating a new story, which tends to come first for you—the CHARACTERS or the PLOT?

Definitely the characters (are they the chicken or the egg here?). A new story always starts with people who talk in my head. Yes, I’m officially crazy. Then I get a first scene which generally involves some sort of problem for these talkative folk. The rest of the book grows organically from there.

I’d love to say I’m one of my flashing-eyed heroines, but I think in reality I’d be consigned to either the faithful best friend or the comedy relief. It always happened when they cast plays at school and I don’t think things have changed much!

What an interesting question. Actually I think my villains – and I don’t always have one, it depends on the story – are pretty nasty all the time. Sometimes, as in A RAKE’S MIDNIGHT KISS, they take a little while to reveal their true villainy, but they’re slimy from the start.

I’ll be obvious and choose PRIDE AND PREJUDICE. I actually think Lizzie and I would have been great friends – although if Mr. Darcy should give me the eye, all bets are off!

A movie I just love is LEAP YEAR, which is a romantic comedy featuring Amy Adams and a very handsome Matthew Goode as a charming Irishman. Ireland is beautiful, Matthew is intriguing, the dialogue is snappy, there’s a lovely first kiss scene, and it has a sigh-worthy ending – hmm, I seem to be imagining myself into Amy’s role here! Is that allowed?

I think the level of heat in my books is always very much dictated by the story and the characters. In SEVEN NIGHTS IN A ROGUE’S BED., there were lots of sensual scenes because (no surprise with the title), my characters needed to cover a lot of ground in a week! In WHAT A DUKE DARES, which is a marriage of convenience story, my characters are engaged in a power struggle and what happens in the bedroom (and out of it!) is a major part of that conflict so again steamy love scenes proliferate.

I think one of the things a writer needs is a thick skin. The reality is that some people will adore your book and some people will loathe it like Brussels sprouts. I found it easier to deal with bad reviews once I realized that PRIDE AND PREJUDICE and FLOWERS FROM THE STORM and every great book you can name have copped a share of one star reviews! You can’t please everyone!

Many authors have branched out into multiple genres over the years. Is there a particular genre of fiction that you have always wanted to tackle but haven’t tried yet?

I’m reading a lot of mystery novels – nearly always with a strong romantic subplot. One day, I’d love to try my hand at a historical mystery like the wonderful stories by C.S. Harris or Jacqueline Winspear. But at the moment, I’m still happily exploring all the passionate possibilities of the Regency historical romance!

Sadly, I don’t think my stories are very cinematic. A lot of the major plot points take place in the characters’ emotions and minds. That works for a book but not so much on the big screen. I’d love to see MR. IMPOSSIBLE by Loretta Chase made into a movie. It has wonderful characters and a great adventure plot based around a voyage up the Nile in Regency times to save the heroine’s brother.

My next release is WHAT A DUKE DARES, book three in my Sons of Sin series which started with SEVEN NIGHTS IN A ROGUE’S BED. Right from the planning stages of the series, I looked forward to writing Camden Rothermere, the Duke of Sedgemoor’s story. Cam’s one of those guys who’s always in control and always knows the right thing to do. But then he finds himself caught up in a scandal with a woman he’s known since childhood and his life falls completely to pieces and he doesn’t like it! Well, he likes some of it (see my answer to the love scene question!). I loved writing about a man who thinks he’s got all the answers, only to discover that he doesn’t know much at all – and he’s a much better, more fulfilled person at the end after everything he’s gone through in the pursuit of true love. WHAT A DUKE DARES is out in late August from Grand Central Forever and you can read an excerpt here: http://annacampbell.info/dukedares.html 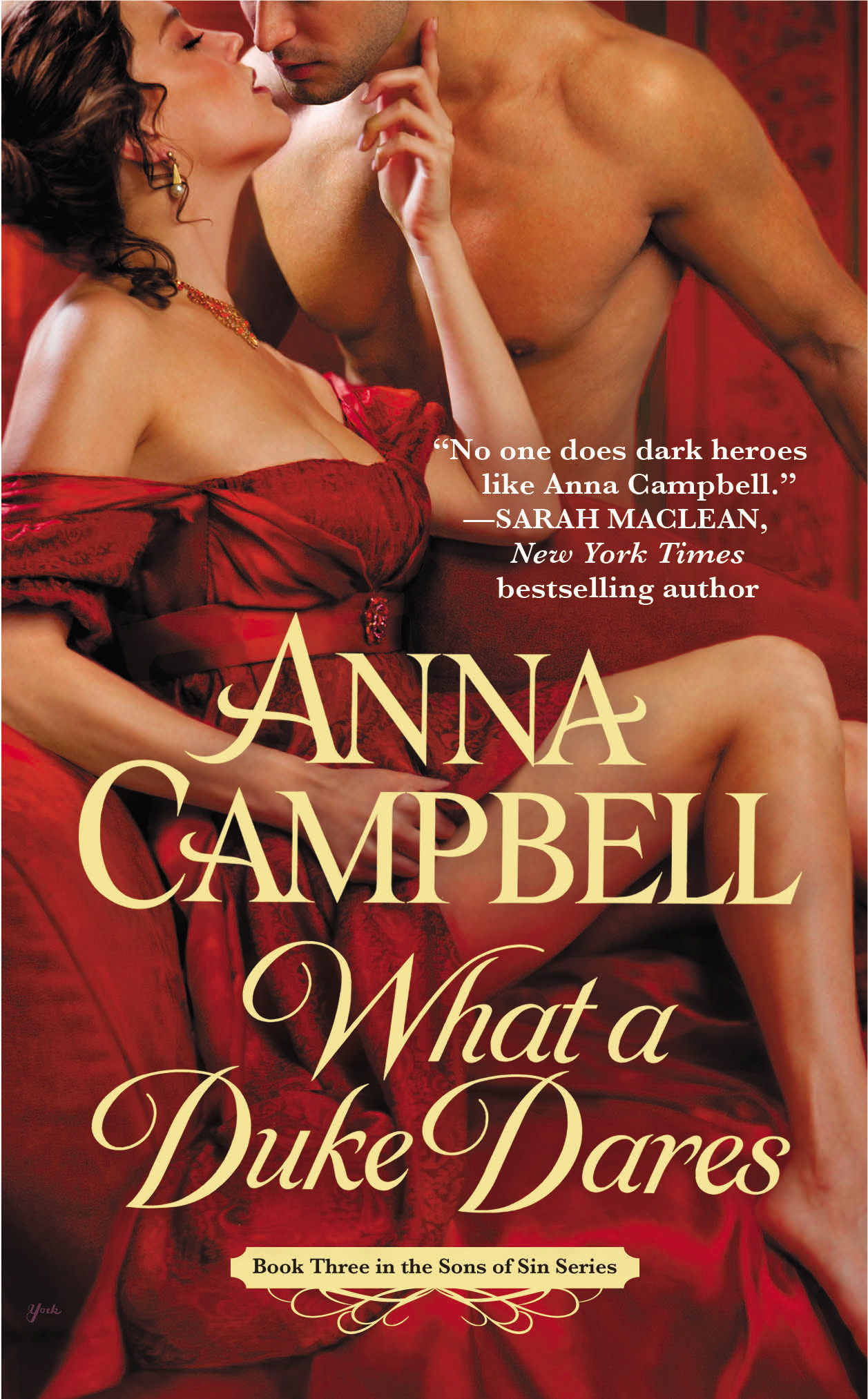 A reputation at risk

What woman in her right mind would say no to marrying the dashing Duke of Sedgemoor? Miss Penelope Thorne, that’s who. She’s known Camden Rothermere since they were children – and she also knows she’d bring nothing but scandal to his name.

Cam can hardly believe Penelope turned down his proposal. But if she wants to run off to the Continent and set the rumor mill ablaze, he can’t stop her. Then her brother’s dying request sends him to bring home the one woman he thought he’d finally gotten over.

The only way they’ll both get back to London without their reputations in tatters is to pretend they’re married during the journey. That means kissing like they mean it and even sharing a bed – until it becomes hard to tell where the game ends and true desire begins…

WHAT A DUKE DARES

SEVEN NIGHTS IN A ROGUE’S BED

Leave a comment here for a chance to win an international print copy of the first Sons of Sin books, SEVEN NIGHTS IN A ROGUE’S BED!

One (1) winner will be chosen at random, by Anna, from comments left here or on our sister site Be My Bard.com. Link to be added as soon as the interview has been posted. 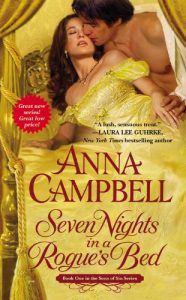 ANNA CAMPBELL has written eight multi-award-winning historical romances for Grand Central Publishing and Avon HarperCollins and her work is published in sixteen languages. Anna is currently engaged in writing the “Sons of Sin” series, which started in 2012 with SEVEN NIGHTS IN A ROGUE’S BED. Look out for WHAT A DUKE DARES in August 2014. Anna lives on the beautiful east coast of Australia where she writes full-time.