Novels Alive and Be My Bard.com are very pleased to welcome this week…author Joan Kayse!

I should say something wise and scholarly but as Siri informed me when I asked this same question “I am not privy to the inner motivations of chickens” I would say that depends.

Each story has its own beginning. For The Patrician Series I would say the plot for the first book…betrayal themes set such a high conflict tone. I knew I wanted sharp contrasts between hero and heroine i.e. social status and it wasn’t until I started writing that it came to me to add another layer to Jared. Not only was he among the wealthy of the Empire but he was of dual ancestry…and of the worse type to a Roman.

The other two stories THE PATRICIAN’S FORTUNE and BARBARIAN’S SOUL? Definitely character driven. Heck, Damon practically hijacked Jared until I reined him in…for a few chapters. Then he popped on back to add secondary insights and charm 😀 Bran was a bit more complicated, coming in at the last but back to characters. It was during his scenes in THE PATRICIAN that THREE very VITAL characters to HIS story strolled in…literally. All I could do was throw up my hands and say “Thanks a lot Muse! Now what?”

I figured it out 😀

I so agree and sometimes it’s hard to pull BACK from putting too much of yourself into them. My heroines do have bits of me in them. The fierceness, ready to defend those that matter. The firelight hair, the blazing eyes…the …..well. Yeah. My heroines. 😀

I think most of my villains are presented as such early on. They are NOT usually hidden per se…they interact in either a point on point conflict with the H/H or in a match of wits. They are a glass half full/half empty until the very end when BAM…they are defeated! Cue Star Wars music.

Anne of Green Gables. She’s feisty, endearing and come on…Prince Edward Island at the turn of the century! I think I’d look good in a straw hat and ribbons.

Hmmm…this is a challenging one. Movie-wise it might be something like Parent Trap or The Long, Long Trailer. Why? I LOVE the fashion of the late fifties, early sixties. Lucille Ball’s dresses alone are worth the trip back in time. My figure? Eh, not so ready for it but sigh…

TV series would be The Big Bang Theory. Quirky, fun nerds who spend their days doing what they love…studying physics (earning MONEY doing what they love), playing games and eating lunch…a lot. Plus they have a great theme song “Soft kitty, warm kitty, little ball of fuuuuur…”

I try to always keep an open mind about reviews. First, I think it’s great that someone took the time to write one. I hope they loved it, every author does, but some not so much. That’s ok…if criticism is given constructively ….no vitriol or hatefulness.

Already doing it 😀 Have the first of nine books of an alternate Irish Mythology paranormal series with the editor as we speak…er…type. The Guardian Isle series will begin release (hopefully) by the end of the year.

That’s easy. Pamela Clare’s MacKinnon Rangers series! INCREDIBLE writing, vibrant stories, intense relationships and kilts 😀 She did a lot of research on the original Rangers who fought for the British during the French/Indian war. The expert way she weaved in the history with the lives of these three brothers was wonderful. 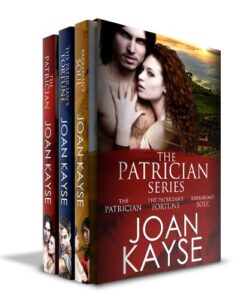 Aside from book 2 of the Irish series, I’m finishing up a Patrician Series novella, a bridge piece to another full length Roman novel. Bryna and her brother Bran have variations of the “sight”. Keeping with the familial theme, Bryna’s son has inherited a deep empathic ability. Kind of hard thing to deal with when you live in Rome and can feel the emotions of those who are conquered. When you’re fourteen years old, you can’t save the world…but you try even if it breaks your heart. Again, plans are for The Patrician’s Son to be available by the end of the year.

Look for all the wonderful stories in Joan Kayse’s The Patrician Series at your favorite online book stores!

At the risk of sounding cliche, I have been writing stories all my life. My first story was written in fifth grade when I composed a dramatic piece about a picture of a lavender flower. Mrs. Pierce had no idea what she started with her weekly creative writing exercises when she asked me to come to the front of the class to tell my tale. But I still remember the pride and excitement I felt at having my story recognized.

My early success did not end there. In eighth grade I once again dazzled the educational world with my gripping adaptation of “The Little Match Girl”. I concede that the world was not quite ready for the, ahem, brilliance of “The Little Flashlight Girl” but I persevered.

It took me much too long to realize that I wanted to build a career with my storytelling. There have been ups and there have been downs. I’ve had so much support from friends and critique partners, contest judges and published authors who give so generously of their time. One of the highlights has been the friendship and support of an amazing group of ladies called the Romance Bandits. Here’s to all the Banditas! ~www.joankayse.com