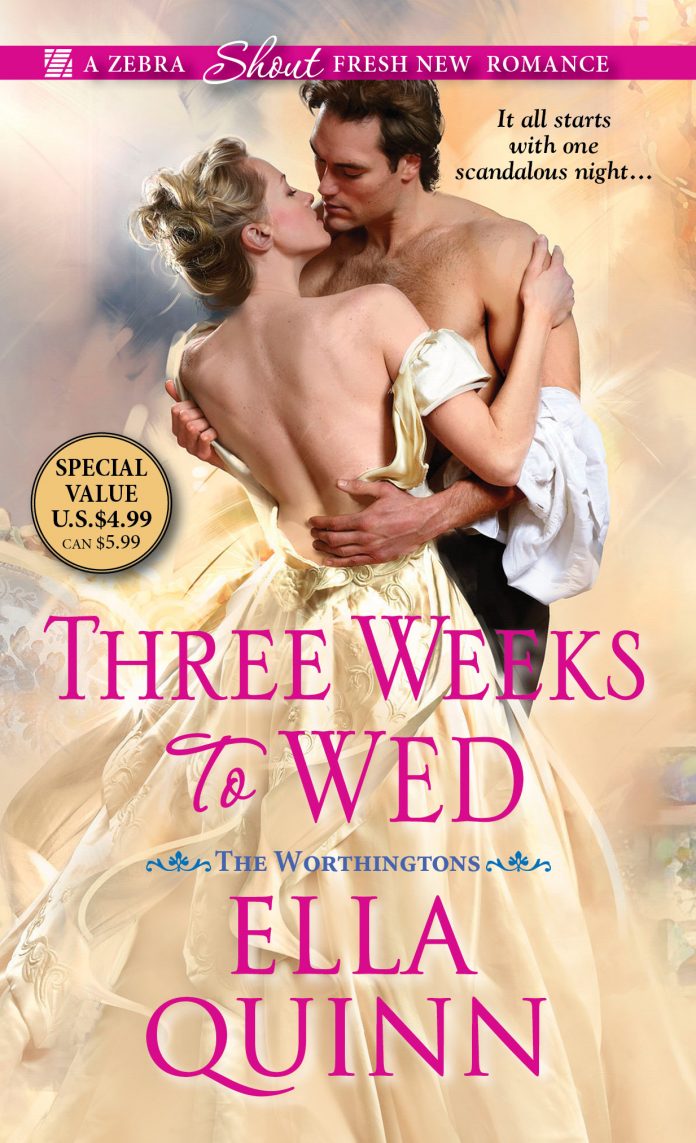 As I write this I’m in the Caribbean on a boat that’s rocking to beat the band. We’ve got two anchors out and are hunkered down until the latest squall passes. That, however, has absolutely nothing to do with what I write. Regencies. I’m known for my large cast of characters, and taking otherwise perfectly eligible people and tying, what one reviewer calls, Gordian knots. My new novel, Three Weeks to Wed, is the first book in my new series, The Worthington’s.

I start out with my heroine twenty-five-year-old Lady Grace Carpenter, who has taken on guardianship of her seven brothers and sisters ranging in age from five to eighteen. In today’s world that would not be a legal bar to marriage, but how one manages to date with that many children at home might be a problem. However, during the early 1800’s in England a married woman could not have custody over her own children, nevertheless her siblings. Therefore Grace has resigned herself to being a spinster. A situation that does not please the adult members of her family who think she should parcel the children two or three at a time to them.

Now, another author might find a hero who, in addition to being tall, dark, and handsome, did not have any children or other family members to consider, but my hero ended up being Mattheus, Earl of Worthington, who has popped up in my last series a few times. He has custody of his four sisters.  Because he already know how to raise children, he is perfect for Grace. There is just a little matter of convincing her that he can be trusted to keep all the children together.

If you’ve had a chance to read my series, The Marriage Game, you’ll recognize some of the secondary characters in Three Weeks to Wed, particularly Lady Bellamny who is not above a little matchmaking when she feels it necessary.

I hope you will come along and celebrate the good times, and commiserate with their woes as the Worthington brood finds their way to love and happily ever after.

In the first book of her dazzling new series, bestselling author Ella Quinn introduces the soon-to-be Earl and Countess of Worthington—lovers who have more in common than they yet know. The future promises to be far from boring…

Lady Grace Carpenter is ready to seize the day—or rather, the night—with the most compelling man she’s ever known. Marriage would mean losing guardianship of her beloved siblings, and surely no sane gentleman will take on seven children not his own. But if she can have one anonymous tryst with Mattheus, Earl of Worthington, Grace will be content to live out the rest of her life as a spinster.

Matt had almost given up hope of finding a wife who could engage his mind as well as his body. And now this sensual, intelligent woman is offering herself to him. What could be more perfect? Except that after one wanton night, the mysterious Grace refuses to have anything to do with him. Amid the distractions of the Season he must convince her, one delicious encounter at a time, that no obstacle—or family—is too much for a man who’s discovered his heart’s desire…

“Oh, the tangled webs we weave…especially when our hearts are involved. Three Weeks to Wed is a delightfully heartwarming escape into the sparkling world of the Regency.  Ella Quinn weaves magic.” —Cathy Maxwell, New York Times bestselling author

Bestselling author Ella Quinn’s studies and other jobs have always been on the serious side. Reading historical romances, especially Regencies, were her escape. Eventually her love of historical novels led her to start writing them. She has just finished her first series, The Marriage Game, and her new series will start in April 2016.

She is married to her wonderful husband of over thirty years. They have a son and granddaughter, one cat and a dog. After living in the South Pacific, Central America, North Africa, England and Europe, she and her husband decided to make their dreams come true and are now living on a sailboat cruising the Caribbean and North America.

She loves having readers connect with her.