NEW YORK, OCTOBER 1928. The Big Apple teems with the glitter of Bright Young Things, Prohibition, and scofflaws—the perfect place for Penelope Harris to start her life over.
As a former opera singer turned Shanghai nightclub owner, she’s seen and done a lot, maybe too much. With any luck, she’ll leave more than The Jade Tiger casino behind her—a murdered husband, a blackmailing torch singer, and Thom Lund, the ex-cop who stole her heart. But Penelope has never had that kind of luck; her past is already waiting for her in New York.

When someone murders her chiseling blackmailer at an out-of-control party and Thom is accused of the crime, Penelope must face down her darkest memories to prove his innocence. Is the murderer her cousin Charles, suckered into a hasty marriage by Penelope’s blackmailer? Or is it Penelope’s over-protective mother, who can’t remember a thing after a blow to the head? Or was it Thom after all, ready to commit murder to save Penelope from the blackmailer’s wicked plans?

Among the opulent mansions of the obscenely wealthy and the grit of a Hell’s Kitchen speakeasy, Penelope and Thom must navigate double-crosses, bad liquor, bootleggers, and dark, obsessive love to find the murderer before the past reaches out to put a noose around both their necks.

THE JADE TIGER is the first book in A PENELOPE HARRIS MYSTERY series. The book is set in the early 1900s during prohibition in New York City with lots of throwbacks to China, where the story really begins. The Jade Tiger is the name of the casino that Penelope owned with her deceased husband in Shanghai, but she seemed more business savvy and cunning than he did. There are a lot of unsavory characters that passed through there, including Renee, who sang there, attracted men like flies who lavished everything they had on her until they had nothing left. Amazingly everyone turns up in New York!

There was some choppiness to the story. There’s a lot of darkness to the story along with a lot of criminal activity, murders, injuries, bad guys, cops, secrets, wealth and opulence or what could pass for it, blackmail, family, and how they stuck together. There are a lot of characters to wade through, sometimes with difficulty. This is Penelope and Lund’s story, who met in Shanghai, and that story is the backdrop for what happens in New York. The story takes a lot of twists and turns with Penelope always in the thick of things trying to solve a murder as well as piece together other events whether she should be there or not. Her family is always involved in one way or another. There is some closure, but it didn’t go far enough for me. I enjoyed both the historical notes and the questions for the discussions at the back of the book.

Ms. Cooper is a new author. I do look forward to reading more in this series, hoping that since I know many of the characters, the story will have a better flow. 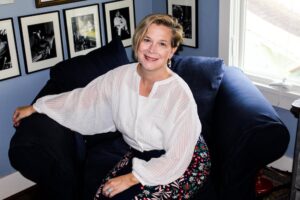 Author of The Jade Tiger (The Booklife Prize 2020 Finalist for Mystery/Thriller), E.W. Cooper lives quietly with her partner, children, three dogs, and one cat in a very noisy house in South Texas. A lifelong fan of mystery novels and Grand Opera, Ms. Cooper is hard at work on Book 2 of the Penelope Harris Mystery series, Murder at the Met.​

Ms. Cooper is a new author. I do look forward to reading more in this series, hoping that since I know many of the characters, the story will have a better flow.3.5 STAR REVIEW: THE JADE TIGER by E.W. Cooper