GUEST BLOG: One Writer’s Path into the Fascinating World of Fiction By Patricia Fry Plus Giveaway!

I’m a career writer. I’ve been writing for publication for 48 years, and I have 54 cozy mysteries to my credit, but I haven’t always written fiction.

It surprises people to learn that when I started my writing career my focus was on “give-me-the-facts-ma’am” type articles—yes, nonfiction. I aspired to be a freelance article-writer. I was fascinated by the way journalists could take facts and present them in an easy-to-read, interesting form and manage to get them published in those wonderful slick magazines. I wanted to be one of those writers. I yearned to spend my days creating articles from a mere dit-dot of a theme, and then open a magazine to see my words with my byline.

I held that dream over a period of about ten years as I raised three young daughters, but dreaming wasn’t all I did. I also studied. I read the magazines I wanted to write for. I subscribed to writers magazines and read them from cover to cover. I devoured Writers Digest. Imagine my joy when I eventually saw MY articles published in Writer’s Digest.

Finally, the day came that I would start my writing career. My daughters were in junior high school, and I had the kind of time I needed to write. I set up a borrowed manual typewriter on a TV tray in a corner of my bedroom, stocked up on typing paper, white out, and carbon paper, and I became a writer. That was in 1973 when beautiful magazines were abundant and freelance writers were, too. Plus, there was actually money to be made and career’s to be advanced.

Fast forward to 2010. I attended a class reunion and discovered that just about everyone I had gone to school with was now retired. I wanted to retire, but how does one retire from writing when you love the process. I had to admit that I was getting a little tired of freelance work—coming up with the ideas, fleshing them out, contacting magazine editors and publishers, writing to their standards, being rejected a LOT… Yeah, I was tired of some of that. “But,” I told myself, “there are many other avenues for a writer who doesn’t want to stop writing. Maybe I can write fiction.”

By then I had over forty published books on a variety of topics—all nonfiction. At that time I simply couldn’t find my way into the world of fiction-writing so, as I brazenly closed the last chapter on my freelance writing career, I decided to live out another dream of mine and write a book of cat stories. I’d always adored cats and often wrote about them, but I’d never attempted to memorialize cats in story form until now. I had the stories. All I needed was the courage to write them. I had to find out if I could write a story and if I enjoyed the process. I could and I did. The result was Catscapades, True Cat Stories.

I soon discovered that there wasn’t a very large market for cat stories or people stories, for that matter—you know, meowmoirs or memoirs. “What is selling?” I wondered. I conducted more research and learned that fiction was selling like crazy—fiction ebooks. “Now,” I thought, “that might be a place for me to start. I will write a book of fiction and test it through Amazon’s ebook program, but what would I write?

At the time I was reading what I called light mysteries—fun, easy-reading, light-hearted mysteries. I liked the feel-good experience these books offered. I’m not much for hard-core, sappy, or fantasy fiction, but maybe I could replicate the style of those “light” mysteries I’d been reading. But I needed a theme. Then I remembered something—another author I used to read. Lillian Jackson-Braun, wrote fiction featuring cats. I’m guessing she was at least one of the first to write sweet mysteries with cats. YES, I thought. Cats. I want cats in my stories—light mysteries with cats.

But, I wondered, is this already being done? Is there a market for light mysteries with cats? By then I’d already joined the Cat Writers Association and I knew there was at least one writer who was emulating Ms. Jackson Braun’s concept. Additional research showed that there were others and that these books were called, cozy mysteries. How cozy! But was there a market for them? Were they selling? If so, was there room for another cozy mystery with cats? The answer seemed to be yes, yes, and YES. Okay, then. I’d write cozy mysteries with cats. Additional research revealed several more cozy mysteries series with cats, and they all had themes. Yikes, now I needed a theme. What could I possibly choose as a theme that wasn’t already taken?

Believe it or not, a cat answered that question. My tabby cat, Lily, had a unique habit or behavior. She constantly brought me her toys and even my slipper socks. Could I create a cat character from Lily’s quirk? I’d heard about cat burglars—klepto cats. In fact I’d read of one in veterinarian, James Herriot’s delightful books in the 1970s.  I always believed that if Lily had been allowed to run free outside, she probably would have brought us all sorts of trinkets and treasures from around the neighborhood—an interesting and fun concept.

The first thing you should do when you hit on a theme you want to write about is to find out if anyone else is already doing this. My research indicated that there was not, so now I had chosen my genre and my theme. Next, I sat down to write the first in the Klepto Cat Mystery Series.

It didn’t take long for the cat character to develop—Rags, the main cat in the Klepto Cat Mystery series is a good-sized, ordinary-looking cat who exudes confidence. He has a lot of good qualities, but one of his habits tends to get him into trouble. He can’t keep his paws of other people’s things. Sometimes the things he takes turn out to be a clue in the current mystery. Rags also has instincts that continually baffle and please the people around him.

My own cat, Olivia, is the star of the Calico Cat Mysteries. Her person is Parker, an investigative reporter, so she is involved in a variety of interesting situations and her sassy and sweet, sometimes obstinate and cranky-pants purr-sonality keeps things lively for the human characters and readers alike.

In my cozy mysteries the cats do not speak beyond a mew, meow, and an occasional hiss. They do not have a point of view. The cats are brought to life through narrative and dialog.

There are many stories out there illustrating how authors made it from here to there. Mine is a story of meager beginnings, hard work and struggles, and eventual success over anything I ever expected. And the most important thing is that I’m still enjoying the journey. 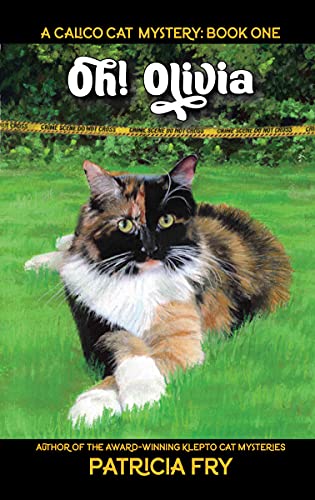 Parker Campbell, an investigative reporter, and her calico cat, Olivia, have been summoned to help save a long-standing cat colony site from the grips of eager developers. They arrive on scene to discover that the property has become enshrouded in a most unsettling mystery. The feral cats are digging up personal items belonging to missing persons who vanished years earlier. Was this the site of a mass murder, a cult ritual gone wrong, or an unexplained phenomenon? Parker teams up with Detective Judson Caldwell, who has taken a personal leave to secretly investigate the mystery, and soon learns what drives his obsession with this case.

Olivia, the sweet and sassy calico, struts her stuff in this story. She locates a lost toddler and ends up getting herself arrested. She isn’t about to take this insult lying down, however. She escapes from custody and trashes the police station. Olivia alerts Parker to trouble when they visit her aunt’s home and find that the woman has detained a burglar in a most unusual way. Olivia also finds major clues in the convoluted cat colony mystery, one that promises a glimmer of hope for a long-grieving parent. 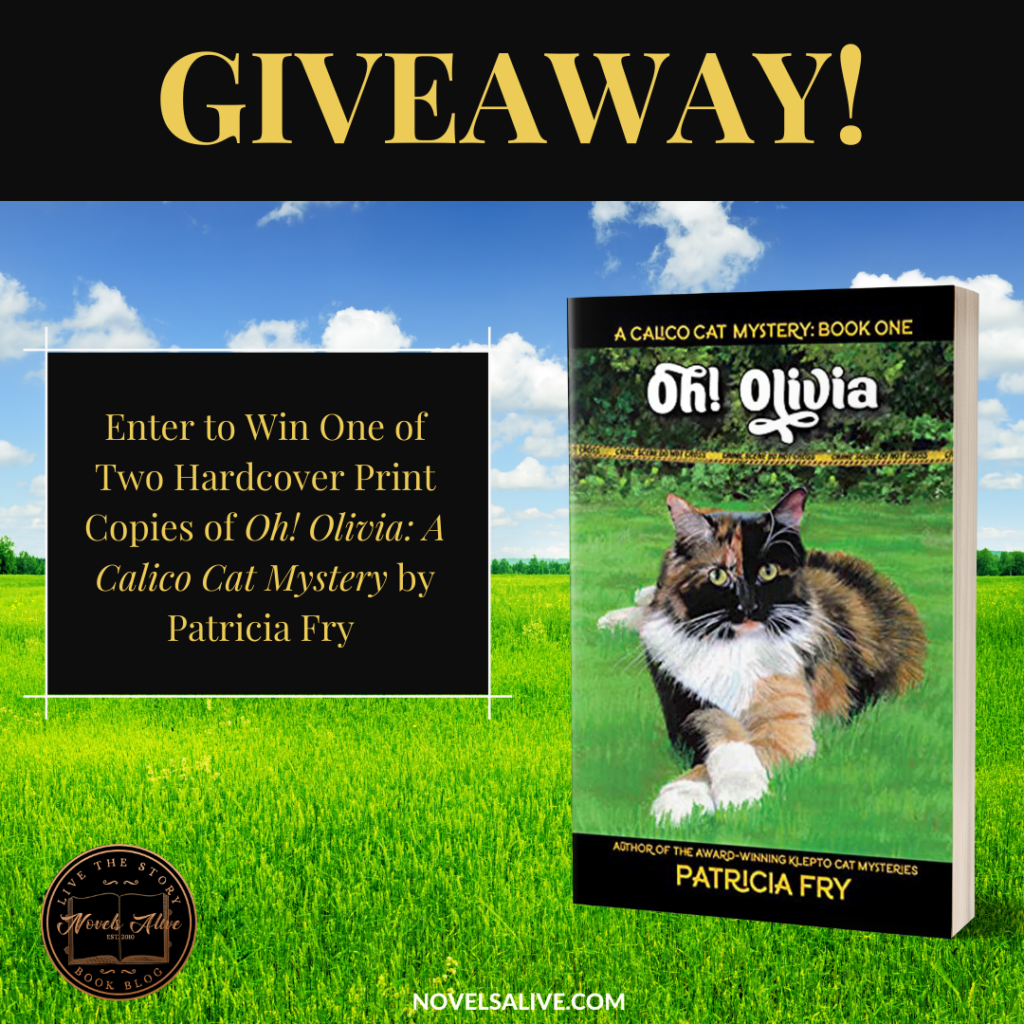 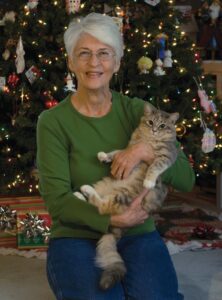 Patricia has been writing for publication for over 45 years. The first Calico Cat Mystery will be her 94th published book. But she didn’t start out writing fiction. She had a passion for writing nonfiction articles, and she wrote hundreds—maybe thousands—of articles over her career for around 300 different publications including, Woman’s World, Entrepreneur, The Toastmaster, The World and I, Western Horse, Cat Fancy, Cats Magazine, Los Angeles Times Magazine, Your Health, Writer’s Digest, and many, many others.

Throughout the 1990s and early 2000s she wrote columns, articles, and books for authors teaching about the business of writing. She presented workshops for authors and gave presentations in dozens of cities throughout the US.

In 2010, she wrote her first cat book—Catscapades, True Cat Tales. The following year she shifted from writing nonfiction and teaching, counseling, and mentoring other authors and she wrote the first in the award-winning Klepto Cat Mysteries series, CATNAPPED. This series is 51-books strong as of April 2021 and counting.

Patricia is past president and director of SPAWN (Small Publishers, Artists, and Writers Network—now WPN, The Writers and Publishers Network). She is a professional member of the Cat Writers Association since 2009, and she has been writing a daily blog—Catscapades since 2009.

Patricia has almost always had a cat at her hearth and in her heart, loving many mixed breed cats as well as a Himalayan, a Persian, and a Siamese. She prefers the long-to medium-haired cats, but she has also shared her home with short-haired cats over the years. All but two of the cats she’s had over the years were adopted. Several of them were rescues and some of those came from feral beginnings. Every one of her cats had a story and those stories sometimes appear in the mysteries she writes.

August 6 – Escape With Dollycas Into A Good Book – SPOTLIGHT