Previous articleBOOK BLAST: THE WISE ONE by K.T. Anglehart Plus Giveaway!
Next articleNEW RELEASE: VORTEX by Catherine Coulter 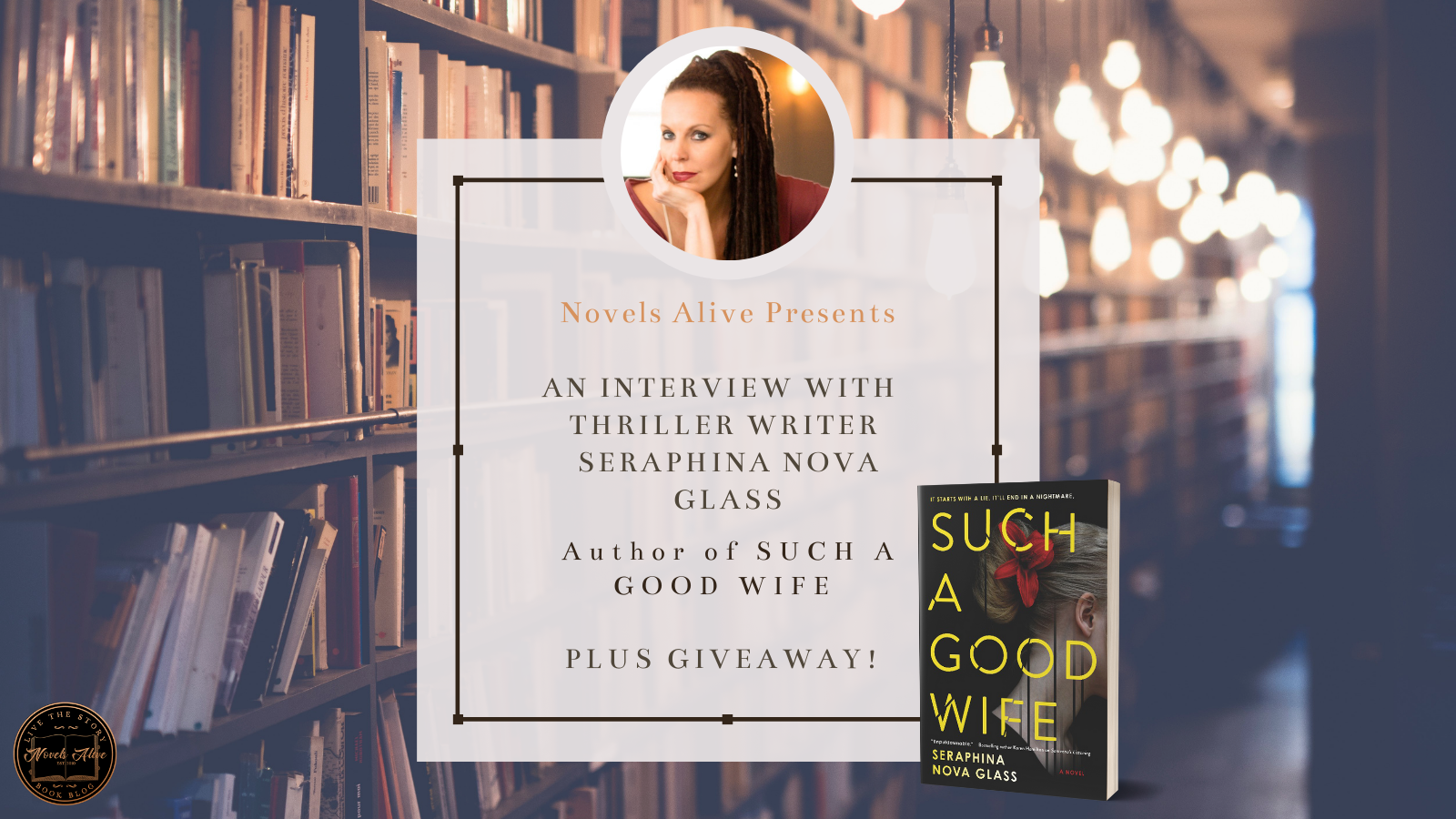 I don’t know that the two can really be separated. I start with plot when thinking about a new book idea and I need to know the ending before I put anything on paper, but then I populate the world with characters that I want to get to know throughout the writing process. I always appreciate a character-driven story rather than action-packed sorts of books, but I think striking the right balance is the most important part for me.

I tend to write in the first person much of the time, and so I often feel very close to my protagonist, and I think there is certainly a bit of me in each of them. I’ve always felt that it was not my job to make a character “likable” but rather interesting, and complex, and flawed, so I have to say one thing that did surprise me when I started publishing is how often my main characters were described as “unlikable.” That was never my intention, I was just writing them as honestly as I could, so it was unexpected feedback. But, I don’t take this as a criticism, necessarily, even if that’s how it’s meant because I write thrillers and I like an MC who is a bit of a hot mess and doesn’t have things under control all the time and can be socially awkward, or angry, or make bad decisions, or not say the right things in the midst of the trauma I’ve created for them. To me that rings truer than worrying about likability which I’ve said many times before feels sexist to me because we never call the male character “unlikeable.” Ever. But I do have to ask myself what this unlikability says about me since I see myself in each of them. Probably a lot! Which I have to take with a sense of humor.

My upcoming book next year (The working title is The Payoff, but that will change!)  is the one I would turn into a film because it’s the first time I have written in multiple characters POV’s and so I think the story is more complex and fast-paced and lends itself to the screen better. I’m really excited about that one.

I love literary fiction. I read a lot of it, and it’s always been what I gravitate toward. I’m a fan of Jonathan Franzen, Michael Cunningham, James Baldwin, Wally Lamb, Alice Walker, and the list could go on forever…I like writing in the fast-paced, page-turny world of thrillers, but I also like slowing down to read these sorts of more serious, character-driven books. Maybe one day I’ll attempt to write one.

I mean, the list of great authors I would love to sit down with is so endless, that instead, I have to give a very contemporary fictional character as my answer instead. I was so in love with Eleanor Oliphant Is Completely Fine, by Gail Honeyman which I finished recently, that I just want to go hang out with Eleanor and Raymond some afternoon.

I like to leave the story each day mid-chapter, or even mid-paragraph or sometimes even mid-sentence. I find that when I sit down to write the next day, I’m already in the middle of a moment rather than trying to start a new chapter from scratch and it helps me get right into it without as much procrastinations. I also write domestic thrillers, so the characters are often very relatable, everyday people which makes it fun to get in their heads and create chaos and obstacles for them, so I guess because my characters are regular people, it’s probably easier for me to get into their minds than it would be if I were writing from the POV of a serial killer or superhero or something.

I wasn’t allowed to read them, but I used to sneak in Stephen King books as a kid, and I can’t say which one specifically, but I remember loving all of it. When I was ten or so, I tried to write a scary story in an attempt to be like him. It was handwritten on lined paper, and it was pretty much a rip-off of the Goonies, but I still have it in a little red folder with a terrible illustration I tried to draw on the front. I love this because I didn’t know then I wanted to be a writer then. I never even thought about it. I started late in life, so looking back on that now is very nostalgic, and I still love everything Stephen King.

Not a lot. I really like to jump into a story that I can tell without relying on a lot of research. The research I do is often trying to get answers to very specific police procedures or crime facts. For example, I have to Google things like “how long does it take a body to decompose in lake water?” or “how do I disable a security camera on an ATM?” or, “Can I buy roofies online?” I keep expecting to have the police show up at my door because my online activity has been flagged somehow and they come to arrest me. The other fun part of this sort of search history is the ads I now get. Because I also search lists of baby names just to get inspiration for character names, Google thinks I am both an expecting mother and a violent criminal, so I’ll get an ad for baby strollers and duct tape or onesies and zip ties on the same page.

Before writing thrillers, I was writing Hallmark Christmas movies.

I recently finished my third thriller that comes out Summer 2022, and I’m just beginning something resembling an outline for book four, but it’s too early to tell what it will turn into yet.

Thank you so much for joining us today, Seraphina! Your answers are great and I’m so excited to pick up your book! Happy release day! 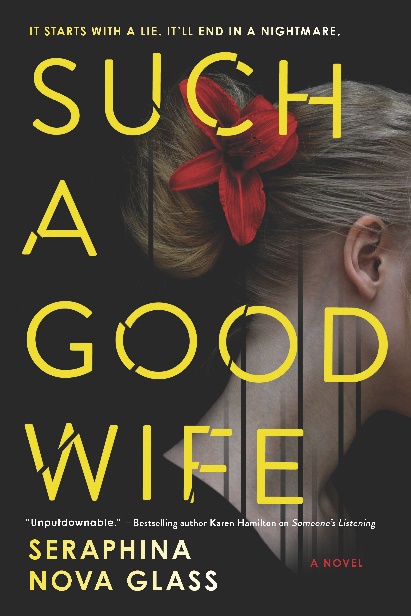 Betrayal was just the beginning…

Melanie Hale is a devoted mother to her two children, a diligent caregiver to her ailing mother-in-law and a trusted neighbor in their wealthy Louisiana community. Above all, she’s a loving partner to her wonderful husband, Collin.

Then there are the parts of herself that Mel keeps hidden. She’s exhausted, worried and unfulfilled. So much so that one night, after a writers’ group meeting, Mel begins an affair with a successful local author named Luke. Suddenly she’s transformed into a role she doesn’t recognize—a woman who deceives with unseemly ease. A woman who might be capable of just about anything.

When Mel finds Luke’s dead body in his lavish rented house, she realizes just how high the stakes have become. Not only does she have to keep her affair a secret in order to preserve her marriage, but she desperately needs to avoid being implicated in Luke’s death. But who would want to kill him? Who else in her life is keeping secrets? And most terrifying of all, how far will they—and she—go to keep those secrets hidden? 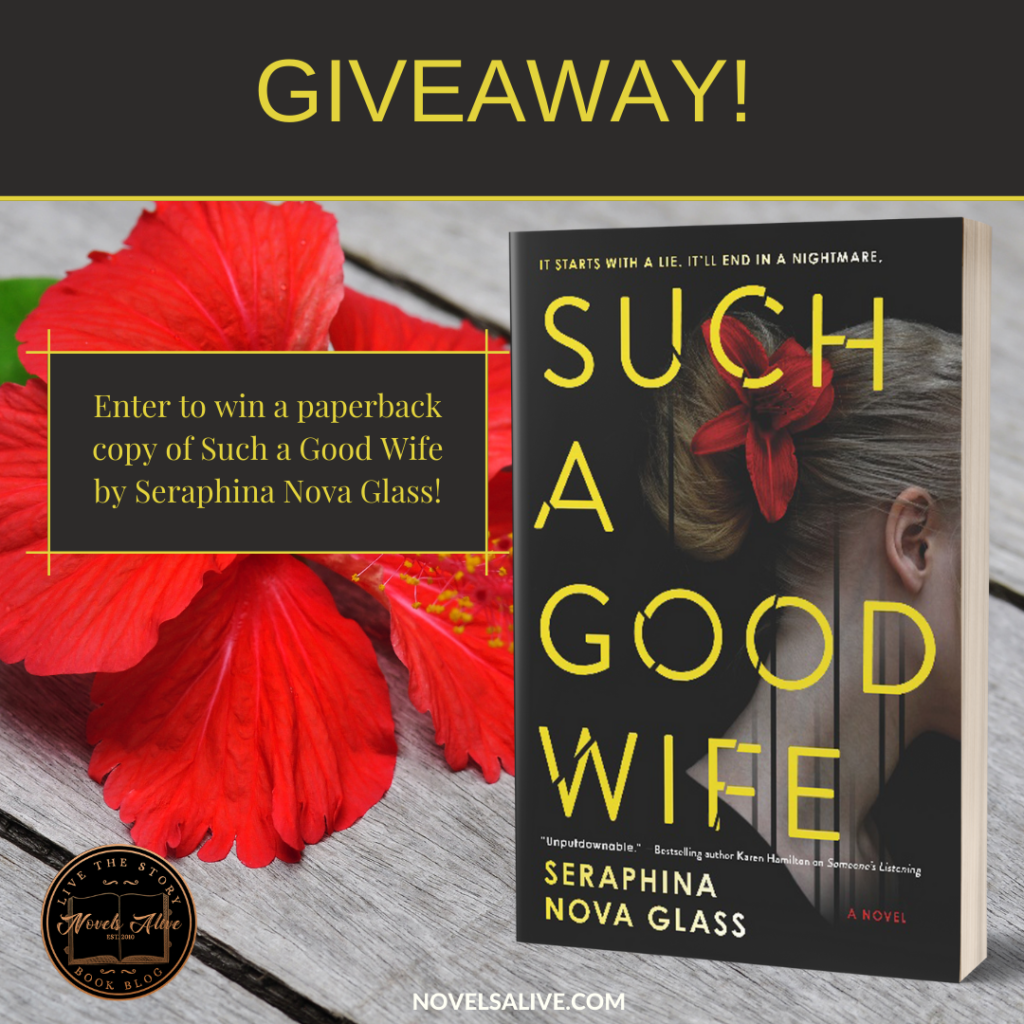 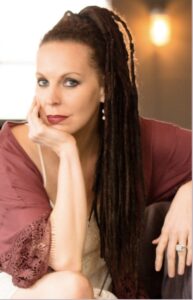 Seraphina Nova Glass is a professor and playwright-in-residence at the University of Texas, Arlington, where she teaches film studies and playwriting. She holds an MFA in playwriting from Smith College, and she’s also a screenwriter and award-winning playwright. Seraphina has traveled the world using theatre and film as a teaching tool, living in South Africa, Guam, and Kenya as a volunteer teacher, AIDS relief worker, and documentary filmmaker. Her newest novel, Such a Good Wife is on sale this August.