GUEST BLOG: Drawing Inspiration from a Classic by Helen Power Plus Giveaway!

Previous articleCOVER REVEAL: HAPPILY EVER AFTER by Cheryl Holt Plus Giveaway!
Next articleGUEST BLOG: Characters That Grab Me by Carol Pouliot Plus Giveaway! 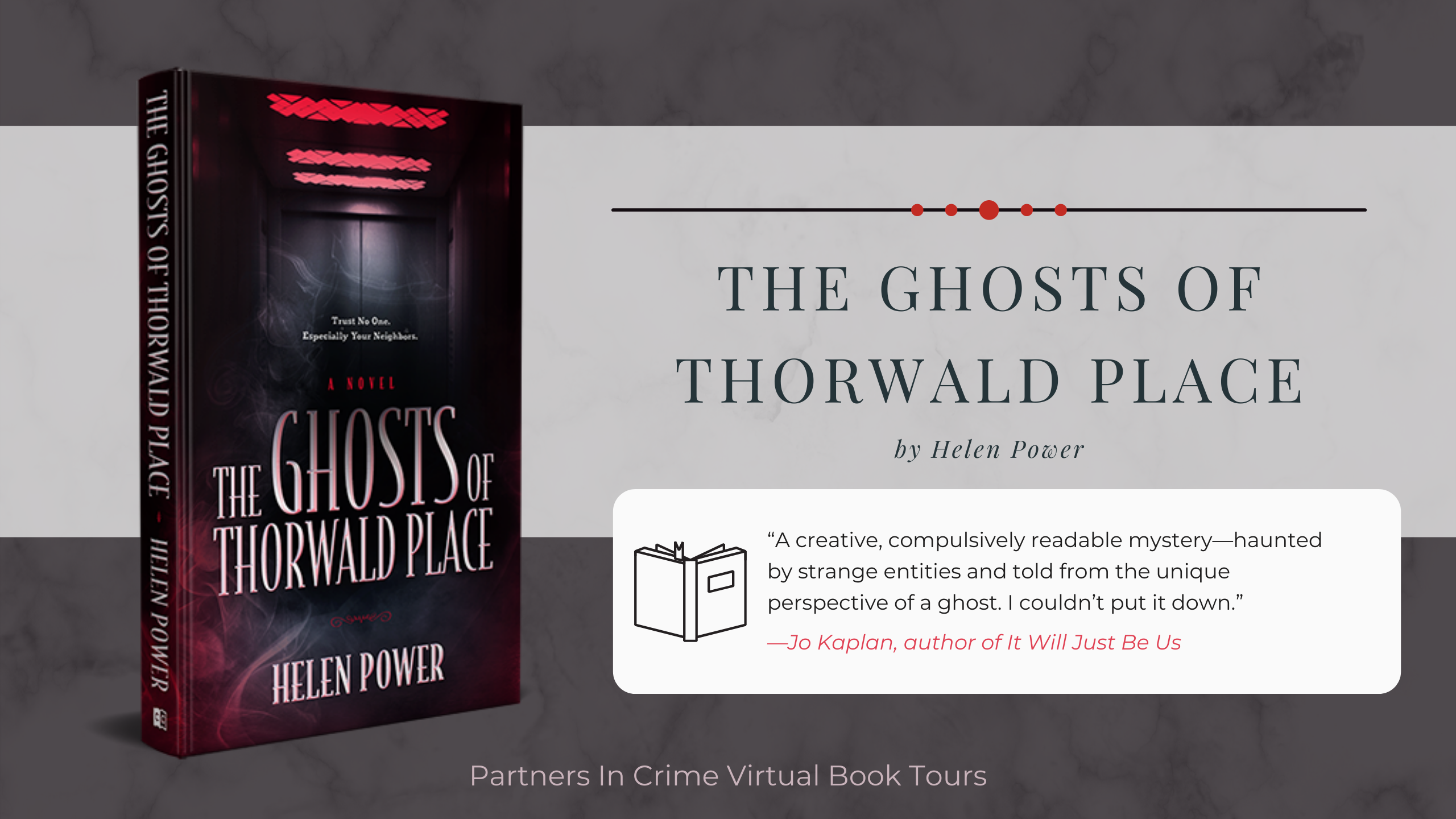 I am and have always been a classic film buff. I unconditionally love anything with Cary Grant or Gene Kelly, I compulsively watch film noirs like Gaslight and Double Indemnity, and I’m obsessed with black and white horror flicks, especially those with Bela Lugosi or Boris Karloff. Above all else, I absolutely adore every Hitchcock film. Some of these movies have been inspiration for countless remakes and reimaginings over the decades. There’s nothing wrong with borrowing an old idea, but it’s important to give it a fresh take.

I first came up with the idea for The Ghosts of Thorwald Place in a dream. I had one of those classic “dream within a dream” scenarios. First, I was a ghost attached to an elevator, yearning to visit the adjacent apartments, but every time I traveled more than a few feet into one of the rooms, I would be wrenched back into the elevator as it was called to a new floor. I “woke up” from this dream to realize that I was telling this idea to an old university professor who critiqued it harshly. When I finally woke up from that dream (for real this time, this isn’t Inception), I jotted down this idea, excited despite the cruel words of my professor—who, by the way, didn’t even teach anything remotely related to creative writing.

So I started with the idea of a ghost attached to her death spot—an elevator. Pretty soon after, I decided that I wanted her to be solving her own murder. This was an easy decision because I love murder mysteries, I did my undergraduate degree in forensic science, and I’d been itching to put it to some use.  I gradually built up my heroine, the setting, and the plot ideas. My protagonist, Rachel, is a ghost. She’s invisible and powerless to influence the world around her. But she does see things that no one else gets to see. She spends her afterlife quietly observing her neighbours, watching them when they think they’re alone. She finds out what truly goes on behind closed doors. While she’s weak in the sense that she can’t interact with anyone, she’s powerful with information. But, of course, even that comes with its own limitations. She doesn’t see everything. She can’t venture all the way into the apartments that surround the elevator, and whenever the elevator moves, she is torn away with it, sometimes at the most inopportune times. She sees what others don’t see, but she still doesn’t get the full story, and she’s too weak to do anything about what she learns anyway.

Does this ring any bells?

As I teased apart this idea into its key elements, I noticed parallels to one of my favourite Hitchcock movies: Rear Window, the infamous 1954 thriller starring James Stewart and Grace Kelly. For those who don’t know (If you somehow don’t know, you should exit this webpage, and go stream the movie immediately. This post will be waiting here for when you finish.), James Stewart is suffering from a broken leg, and he’s housebound. Bored silly, he decides to observe his neighbors in the apartment building across the way. He sees into their apartments, watching them when they think they’re alone, seeing sides to them that no one else gets to see. And then, he sees a murder.

Both the protagonist and the plot (in broad strokes, of course) were blatantly similar to my novel idea. But rather than trying to distance myself from this similarity, I leaned into it. I added enough twists and diverging plot points to make it different enough. But I accepted the commonalities, particularly when writing a pivotal plot point that happens in the middle of the novel. I even threw in a few Easter eggs for fans of the film to spot when reading the book.

Then I paid homage to Rear Window in the best way that I knew how. Lars Thorwald is the villain in the Hitchcockian masterpiece, and what better way to tip my cap at this inspiration than by putting a reference to it in the title of my work? I named the building after the film’s villain, which works out quite well, given that, in true Gothic thriller style, the setting itself is its own character, and could be considered the ultimate villain of the piece.

Other than giving you a connection to your inspiration, there are other benefits of taking advantage of the similarities between your work and the classic it’s inspired by. Fans of the source material will immediately feel a kinship with your work. You’re drawing from a larger fan base—those who want to see a new spin on an old story. This also gives you an invaluable marketing tool. Telling people that my novel is Rear Window with ghosts almost always grabs their attention! It also provides the reader with expectations regarding plot, characters, and sometimes even tone or atmosphere. There’s a reason why the classics and their tropes are so popular, so why not embrace this?

As the great Alfred Hitchcock once said, “Ideas come from everything”, (even the classics!), but it’s how you take these ideas and twist them into something unique that ultimately makes for a compelling story. 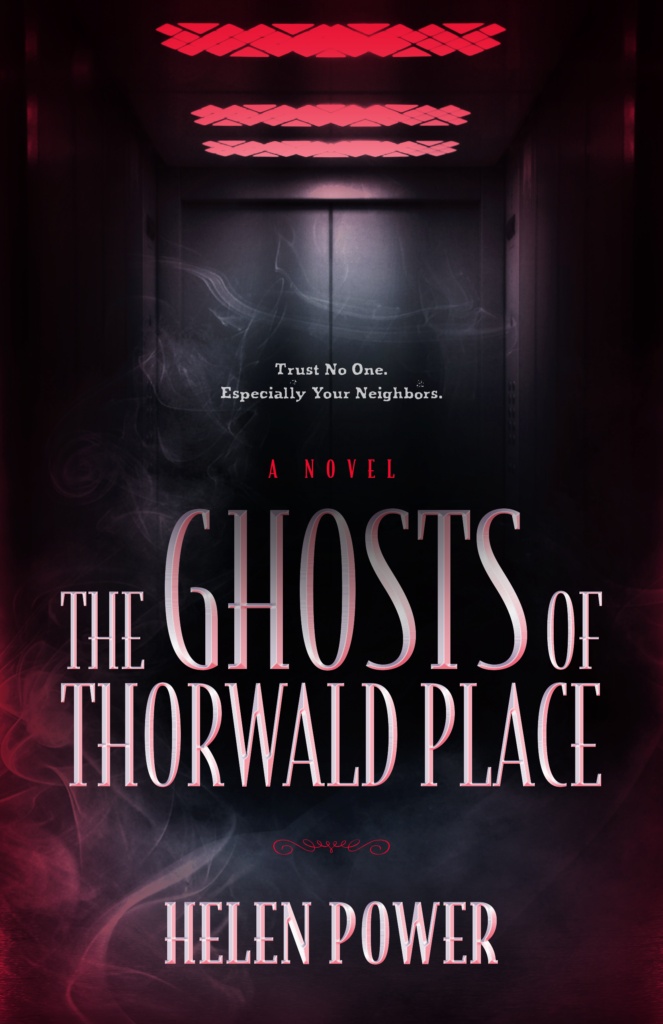 Trust No One. Especially your neighbors.

Rachel Drake is on the run from the man who killed her husband. She never leaves her safe haven in an anonymous doorman building, until one night a phone call sends her running. On her way to the garage, she is murdered in the elevator. But her story doesn’t end there.

She finds herself in the afterlife, tethered to her death spot, her reach tied to the adjacent apartments. As she rides the elevator up and down, the lives of the residents intertwine. Every one of them has a dark secret. An aging trophy wife whose husband strays. A surgeon guarding a locked room. A TV medium who may be a fraud. An ordinary man with a mysterious hobby.

Compelled to spend eternity observing her neighbors, she realizes that any one of them could be her killer.

And then, her best friend shows up to investigate her murder.

“[An] enticing debut . . . Distinctive characters complement the original plot. Power is off to a promising start.” —Publishers Weekly

“A creative, compulsively readable mystery—haunted by strange entities and told from the unique perspective of a ghost. I couldn’t put it down.” —Jo Kaplan, author of It Will Just Be Us 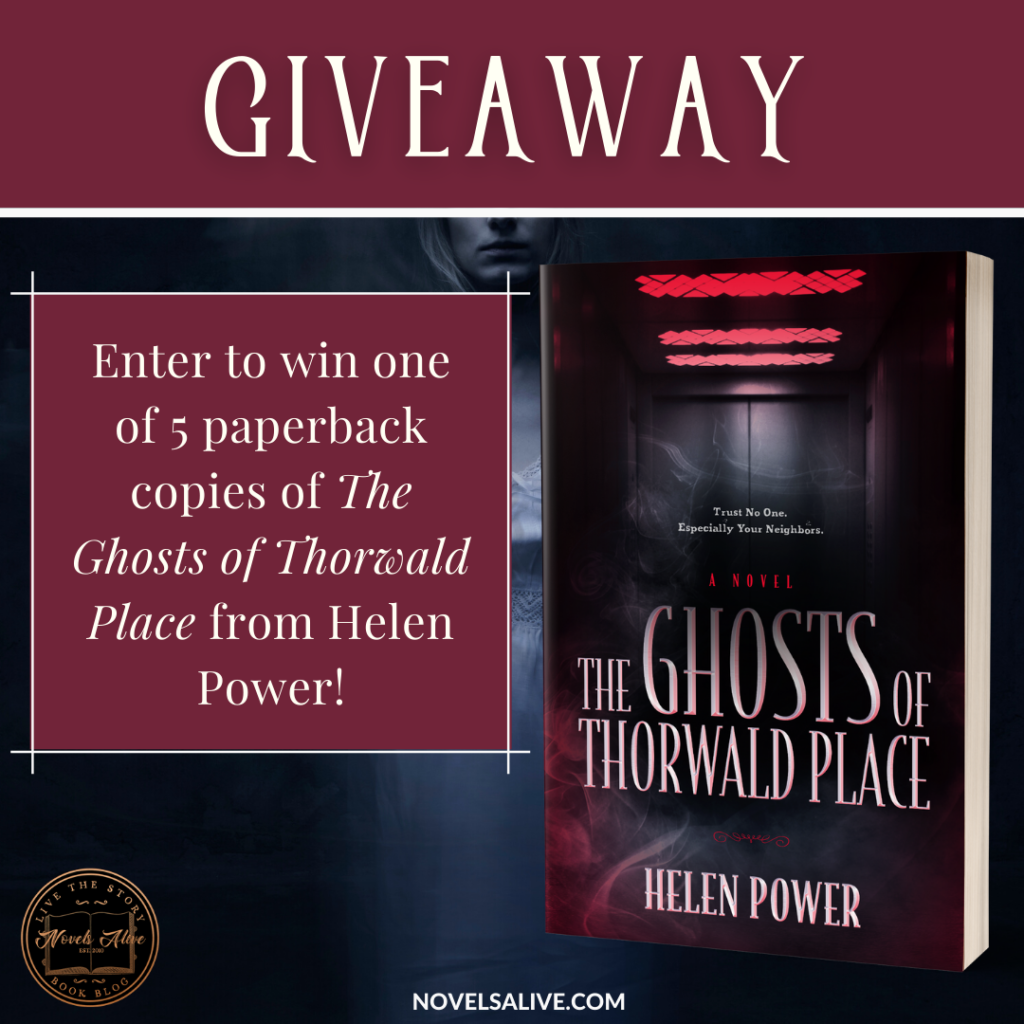 This is a Rafflecopter giveaway hosted by Partners in Crime Virtual Book Tours for Helen Power & CamCat Publishing. There will be Five (5) winners for this tour. Each of the winners will each receive 1 print ARC edition of The Ghosts of Thorwald Place by Helen Power (US, Canada, and UK shipping addresses Only). The giveaway begins on October 1 and ends on November 2, 2021. Void where prohibited. 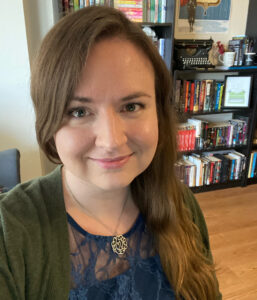 Helen Power is obsessed with ghosts. She spends her free time watching paranormal investigation TV shows, hanging out in cemeteries, and telling anyone who’ll listen about her paranormal experiences. She is a librarian living in Saskatoon, Canada, and has several short story publications, including ones in Suspense Magazine and Dark Helix Press’s Canada 150 anthology, “Futuristic Canada”. The Ghosts of Thorwald Place