GUEST BLOG: by A Sheepish Investigation by Joy Ann Ribar Plus Giveaway!

When I wrote my first mystery, Deep Dark Secrets in 2019, I decided on a whim to make my main character’s business partner, Carmen, one half of a sheep-farm-owning husband and wife duo. In Wisconsin, dairy and beef cattle farms outnumber sheep farms seven to one, but my childhood memory of visiting a family friend with lambs that I could hold and bottle feed, tugged at my heartstrings. Thus, Carmen and Ryan O’Connor were destined to run a sheep farm both for meat and wool, as is common in Wisconsin.

Last fall I began outlining my new book, Deep Green Envy, which I knew would center around the O’Connor farm, where a shooting would take place at dawn on a June day, when the O’Connors were in Chicago for the weekend, attending a family wedding. My main character, baker/vintner Frankie Champagne, talked her best friend/business partner into leaving their farm in her hands for a couple of days so the O’Connors could visit family and take part in the wedding. Of course, the shooting would happen on Frankie’s watch, making her the first on the scene, charging ahead to investigate the tragic event.

Once the plot, suspects, motives, and opportunities were fleshed out, I soon realized I needed to know a lot more about sheep farming than holding a cute wooly lamb!

Thank goodness for the Beckers, who had been raising sheep more than 40 years about four miles outside of my hometown! Would they talk to me, let me visit their farm, take photos for my new book? A resounding yes, and I was off to spend a few dates at the farm in winter, spring and summer. They answered every question, including possible ways sheep could be involved in a murder plot. A bit gruesome, but I learned that sheep manure could dissolve a human body, and I’m only telling you this because Deep Green Envy does not feature this fun fact as a plot point.

The Beckers once had over 500 sheep in their midst, but now in semi-retirement, they’ve whittled the flock down to about 75 ewes. I found out that most farmers do not keep rams in their flocks; they simply hire them out from providers when it’s the breeding season. It turns out that one ram can service around 25 ewes. I also found out that 75 pregnant ewes should produce around 150 lambs because most have twins, and a few even have triplets.  The Beckers say most sheep farmers will only keep the best breeding ewes, usually descendants of other quality breeding ewes.

Ewes can easily care for twins most of the time, but triplets are another story. Triplets mean the Beckers will have to be up at night to bottle feed, since lambs eat four times a day. But a triplet lamb isn’t the only problem. Some ewes just aren’t good at mothering or do not produce enough milk, so the Beckers will have several lambs to care for as surrogate mothers until they are old enough to eat grain and grasses, usually not until they are 8-10 weeks old. 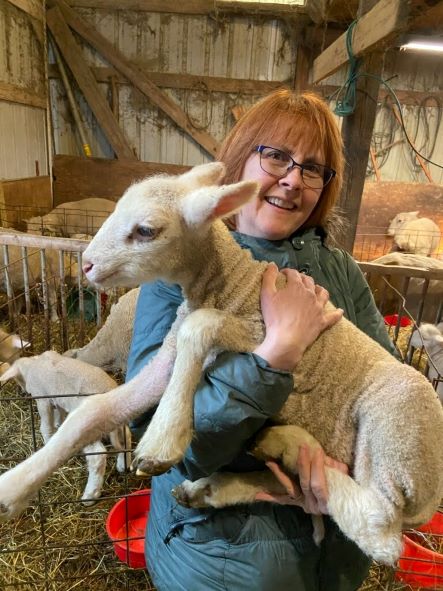 When I visited the farm during lambing season in April, I was introduced to Gigi, the prize lamb in that year’s flock.  My daughter and I both held the sweet white bleating bundle, snuggled our faces into her short fluffy coat, and instantly fell in love with her. We learned that only a select few sheep are accorded a name.  Most wore ear tags with identifying numbers on them: right ear tags meant they were females, left ear tags were males, which would soon be neutered.

Gigi was projected to become a classy breeding ewe with high-quality wool.  Her mother, Penelope, was a regal member of the Targhee breed. Targhee sheep, developed in Idaho, are known for meat and produce high-quality wool, which is finer for added breathability in finished fabrics. Penelope, unlike the average sheep, was social and affectionate toward humans.  Most of the ewes were indifferent except for the mothers, who were in constant surveillance mode.  Such is the life of a mother! 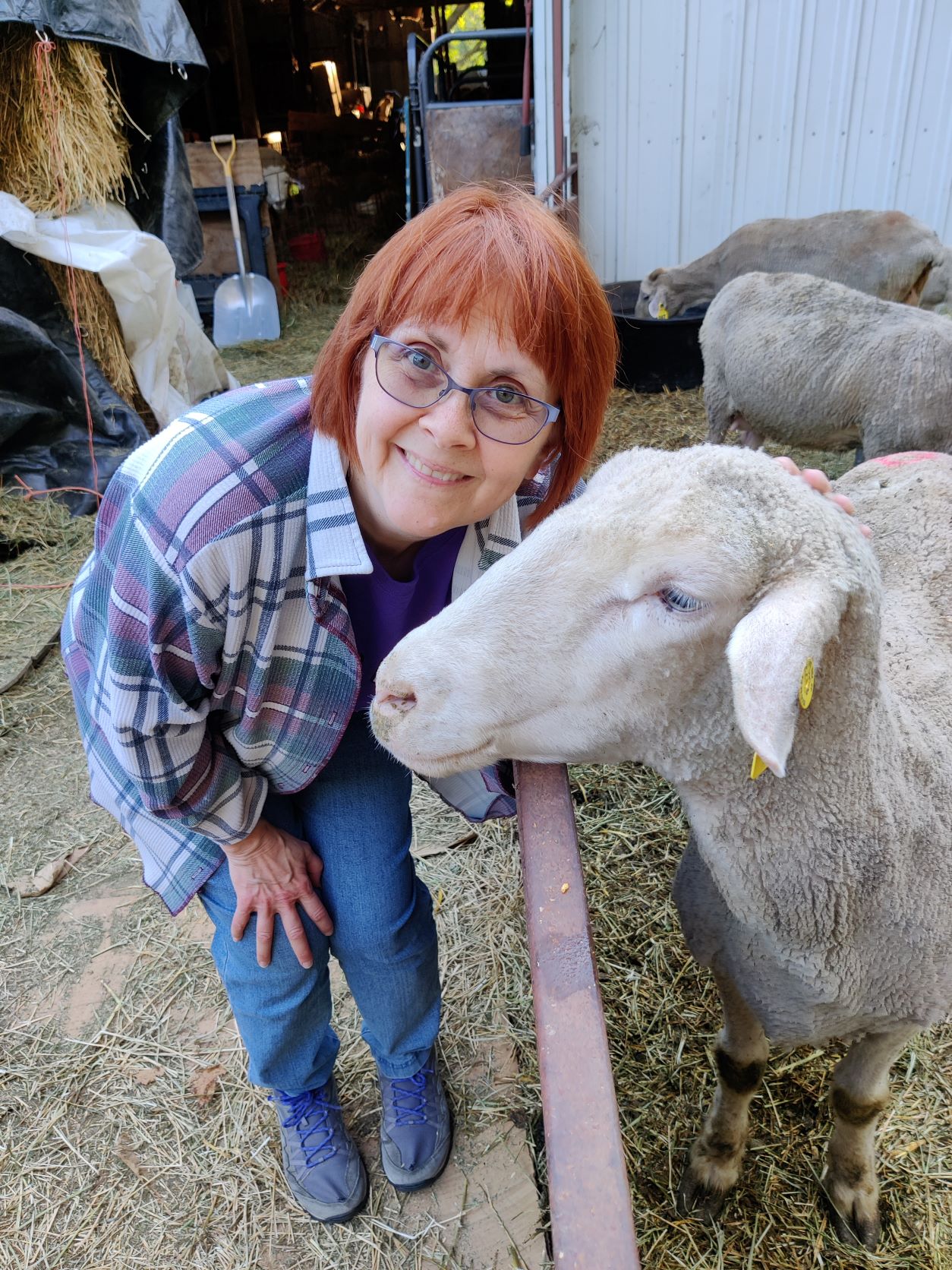 As for me, my true author colors were on display at the farm.  What can I say? I love learning new words. Here are a few sheep terms I added to my vocabulary at the Becker farm:

Finally, all of my book launches include giving away a bottle of wine that is in some way associated with vintages Frankie is batching at Bountiful Fruits vineyard to serve at the Bubble & Bake shop. My husband found “In Sheep’s Clothing,” a Cabernet with a ewe on the label, perfect for my book launch drawing. How wonderful that the Beckers’ favorite wine just happens to be Cabernet. I’ll be dropping by the farm again this month to express my gratitude, with new book and bottle in hand! 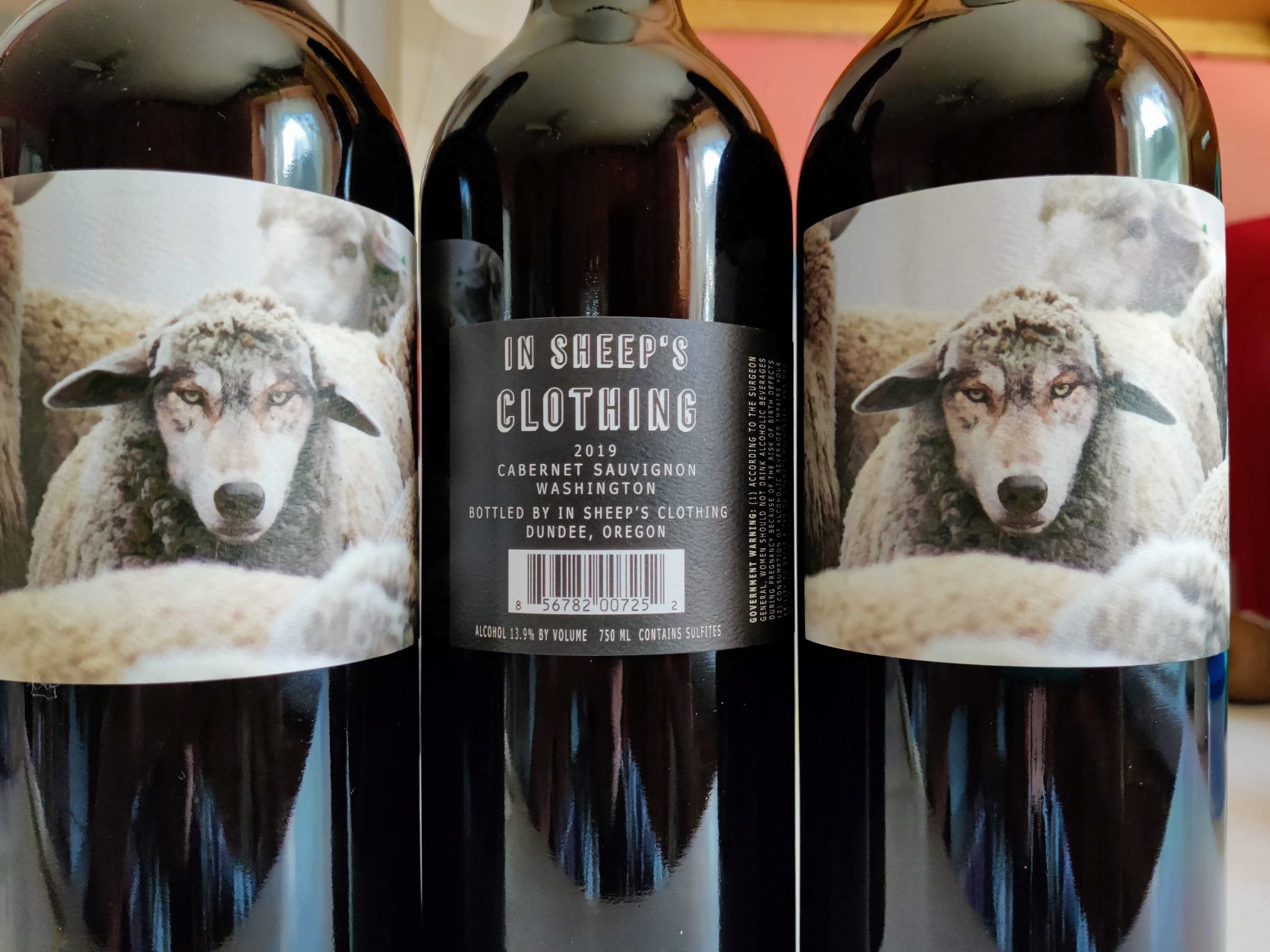 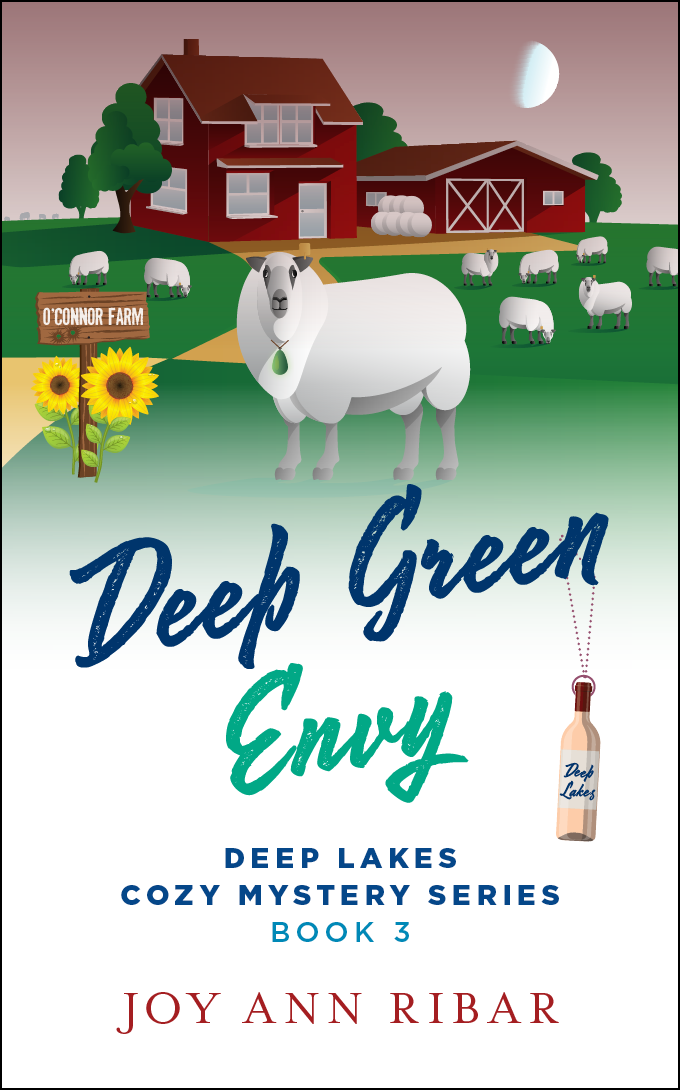 Summer in Deep Lakes sprouts a homegrown murder on the O’Connor farm. Frankie Champagne’s hunt for clues lands her deep in sheep doo-doo, especially after rare stones surface in unexpected places. Crime-solving is no picnic for the baker/vintner as she hops from farm to field to bakery, trying to keep up with the tourist season and track a killer, too. 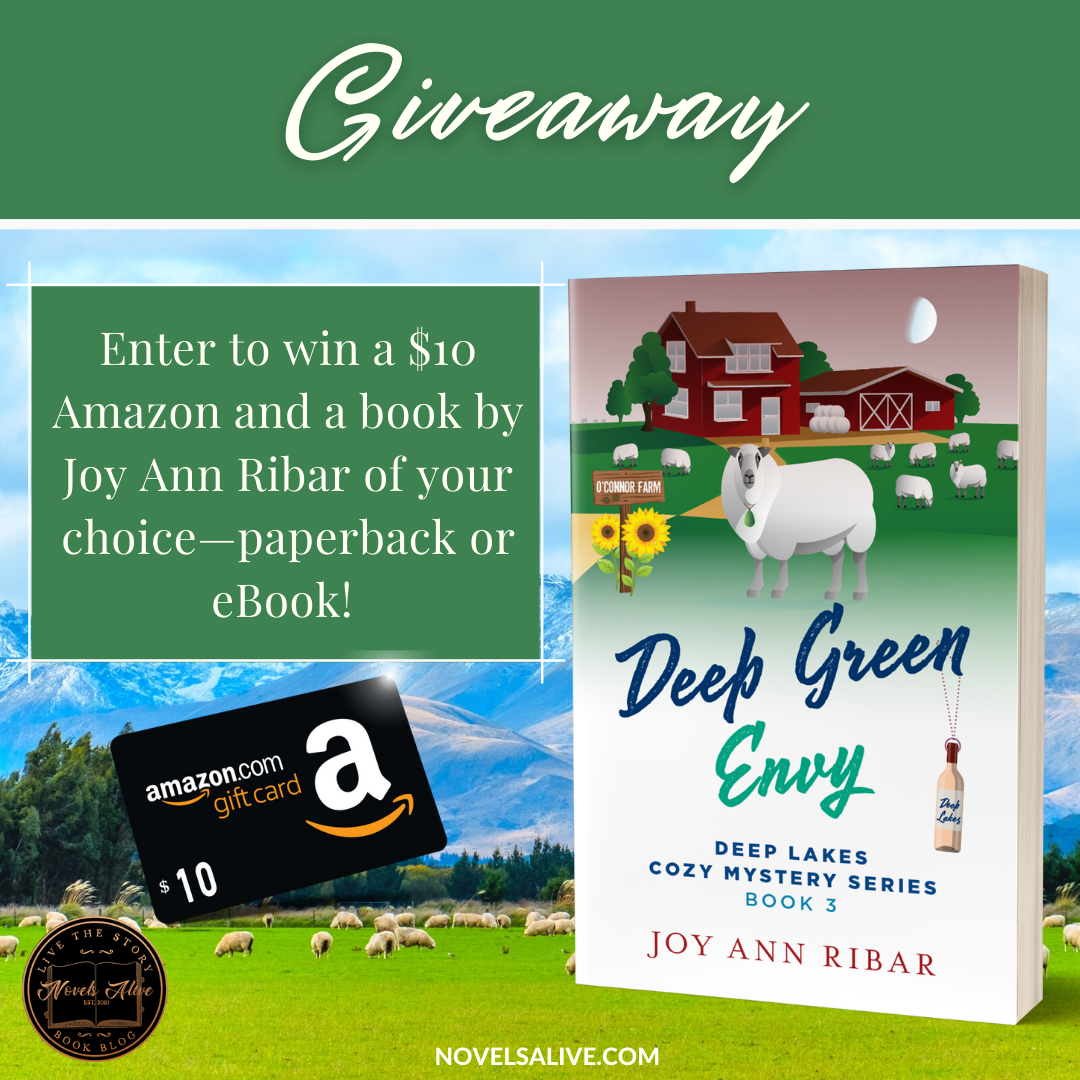 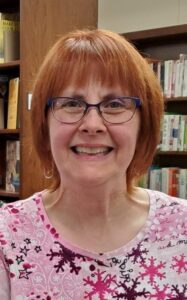 Joy Ann Ribar lives in central Wisconsin with her business partner-husband, John. She writes the Deep Lakes Mystery Series, starring baker/vinter and all-around spitfire, Frankie Champagne. Joy’s writing is inspired by Wisconsin’s four distinct seasons and local flavors, which she hopes to promote for all to enjoy.

Joy is a member of Sisters in Crime, Midwest Independent Booksellers, and Wisconsin Writers Association. She enjoys researching viticulture at area wineries, birding, hiking, and chatting with readers. Joy and her husband, John, someday plan to sell their house, buy an RV and travel around the U.S. spreading good cheer and hygge! Joy is a little proud to have two bestsellers with Orange Hat Publishing: Deep Dark Secrets.

October 4 – I’m All About Books – SPOTLIGHT

October 9 – Here’s How It Happened – SPOTLIGHT

October 13 – Escape With Dollycas Into A Good Book – REVIEW