When conducting research for The Overlook Murder, I joined a hike sponsored by the Nature Foundation at Wintergreen to learn more about local flora. We couldn’t have asked for a better guide than Mike, a trim sixty-something man with a full gray beard. In the first mile, Mike identified the dominant trees in the forest, explained that lichen were actually two separate organisms living in a symbiotic partnership, and pointed out which mushrooms were safe to eat. A hundred yards farther down the trail, Mike paused to show us the leaf of a sapling.

“This is an American Chestnut leaf,” he said.

The leaf was canoe-shaped with forward-hooked teeth along its edges.

“The American Chestnut is common in this forest,” said Mike, “but notice the diminutive size of the tree. It never grows taller than twenty feet.”

“Oh, no,” said Jennifer, a middle-aged woman in a ball cap. Jennifer was prone to openly sharing her emotions with strangers.

“Why not?” said Brad. Brad was a tall angular man and wore jeans, a tan shirt, and a floppy hat. He struck me as something of a busybody and had already asked Mike several questions.

“It’s a very interesting story,” said Mike, and he proceeded to share it.

In 1900, the American Chestnut was considered the greatest hardwood tree of the eastern United States. Four billion of the trees lived in forests from Maine to Georgia. Growing to a height of a hundred feet or even taller, a single tree could live for five hundred years, leading some to call them the redwoods of the east. For thousands of years, Indigenuous Americans relied on the chestnuts and the animals that fed on them. Later, farmers fattened livestock by grazing them among chestnut stands. Beyond playing a crucial role in the food chain, the American Chestnut was useful in other ways because the wood was rot resistant and suitable for building anything from railroad ties to coffins.

Artists took notice of the American Chestnut’s presence in everyday life. In 1870, Winslow Homer carved a wooden engraving titled Chestnutting that depicted children holding a blanket beneath a tree to catch nuts. In the 1940s, Nat King Cole recorded The Christmas Song written by Robert Wells and Mel Tormé. The song became a major hit and included a lyric referring to roasting chestnuts over a fire. But soon after the song reached number one, the American Chestnuts were mostly dead.

When Mike made that point, Jennifer gasped.

Brad fingered the chestnut leaf and asked, “Why has this particular tree survived?”

“Good question,” said Mike. “Surprisingly, even today, the trees continue to grow from root sprouts because the disease doesn’t travel underground. Unfortunately, the blight remains in the forest, and new trees are killed before they can reach a reproductive age.”

“Don’t lose all hope,” said Mike. “Conservation groups have strived for decades to breed a blight-resistant strain of American Chestnuts, and it appears they have finally succeeded. One day, the American Chestnut may flourish again.

“Excellent,” said Brad. “Excellent. And what’s this leaf over here?”

Much later, when I was writing The Overlook Murder, I reflected on the sad story of the missing American Chestnut forests and decided that this once magnificent tree should make a cameo appearance in my novel. See chapter twenty-seven.

Indian Life Today, The Life and Death (and Life) of the American Chestnut. September 13, 2018.

US Department of Agriculture, American Chestnut . . . an American Wood. February, 1973. 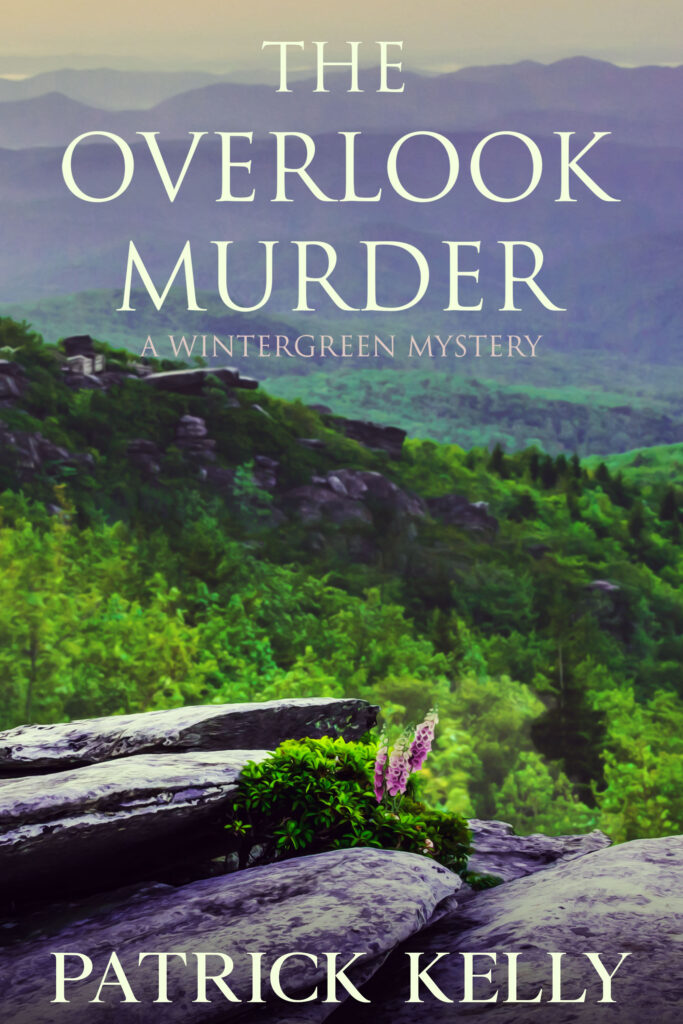 It’s a short walk to the overlook but a long way down.

The rich entrepreneur Damian Susskind has recently survived a heart attack and quintuple bypass surgery. Suddenly aware of his own mortality, Damian summons his family and friends to Wintergreen to share the latest plans for his will. Unfortunately for Damian, one of those in attendance bears him malicious intent, and by the end of the day, Damian is dead.

Retired police detective Bill O’Shea is asked to help the short-staffed Wintergreen police department investigate an accidental death. Forensic evidence soon convinces Bill that this was no accident. There is plenty of motive to go around and more than a few suspects–the difficulty is tying a single killer to the crime. Will Bill and his friends solve the case, or will a Wintergreen murderer go free? 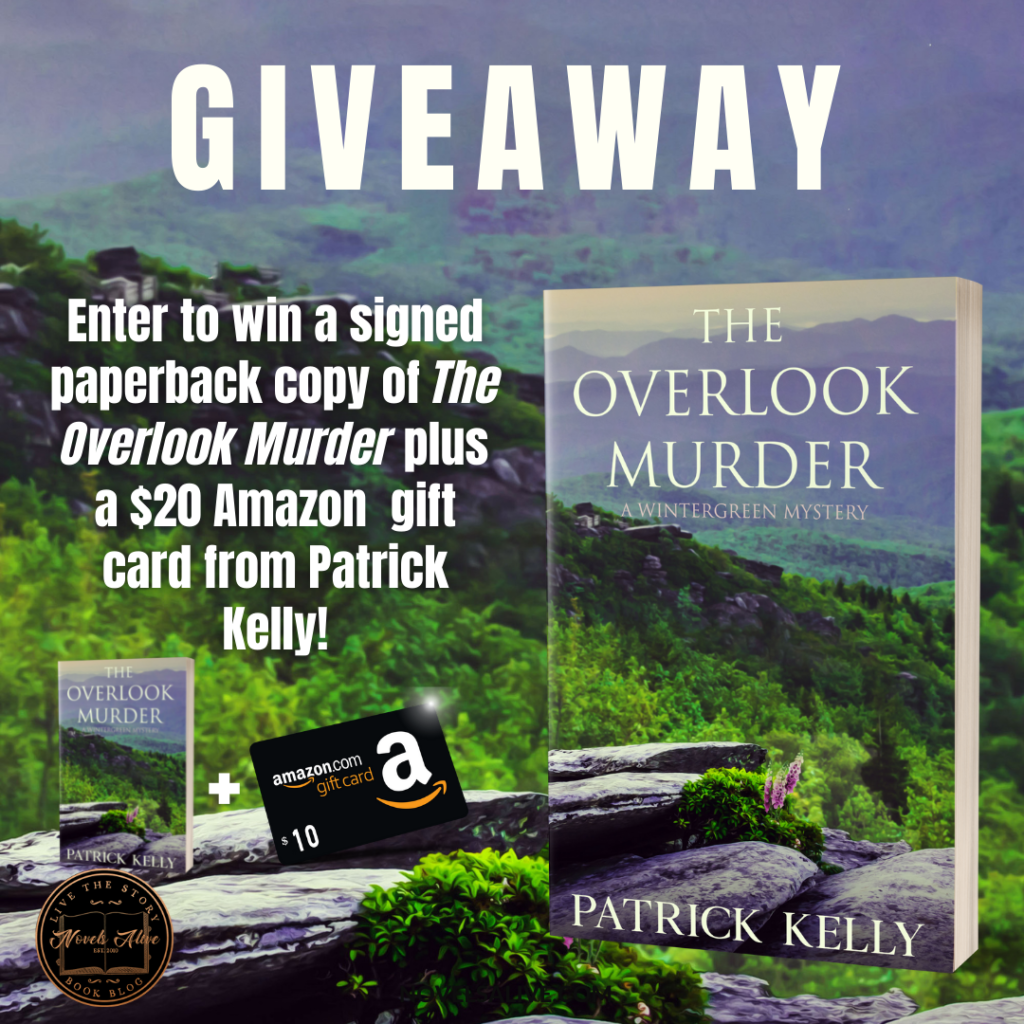 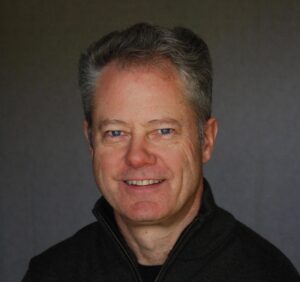 Pat Kelly was raised in Yorktown, Virginia, graduated from UVA, and left the state to pursue a corporate career. After settling in Texas, Pat married Susie, and together they raised two daughters in the awesome city of Austin. With the girls now grown and gone, Pat has pursued a lifelong love of writing stories.

Pat has written eight novels–books one and two in the Wintergreen Mystery Series, the Joe Robbins Series of five suspense thrillers, and one standalone novel of historical fiction (The Sheila Stories)

Pat is the winner of a Beverly Hills Book Award and a silver medalist for the Wishing Shelf Book Awards for adult fiction. He serves as Membership Chair of the Heart of Texas Chapter of Sisters in Crime.