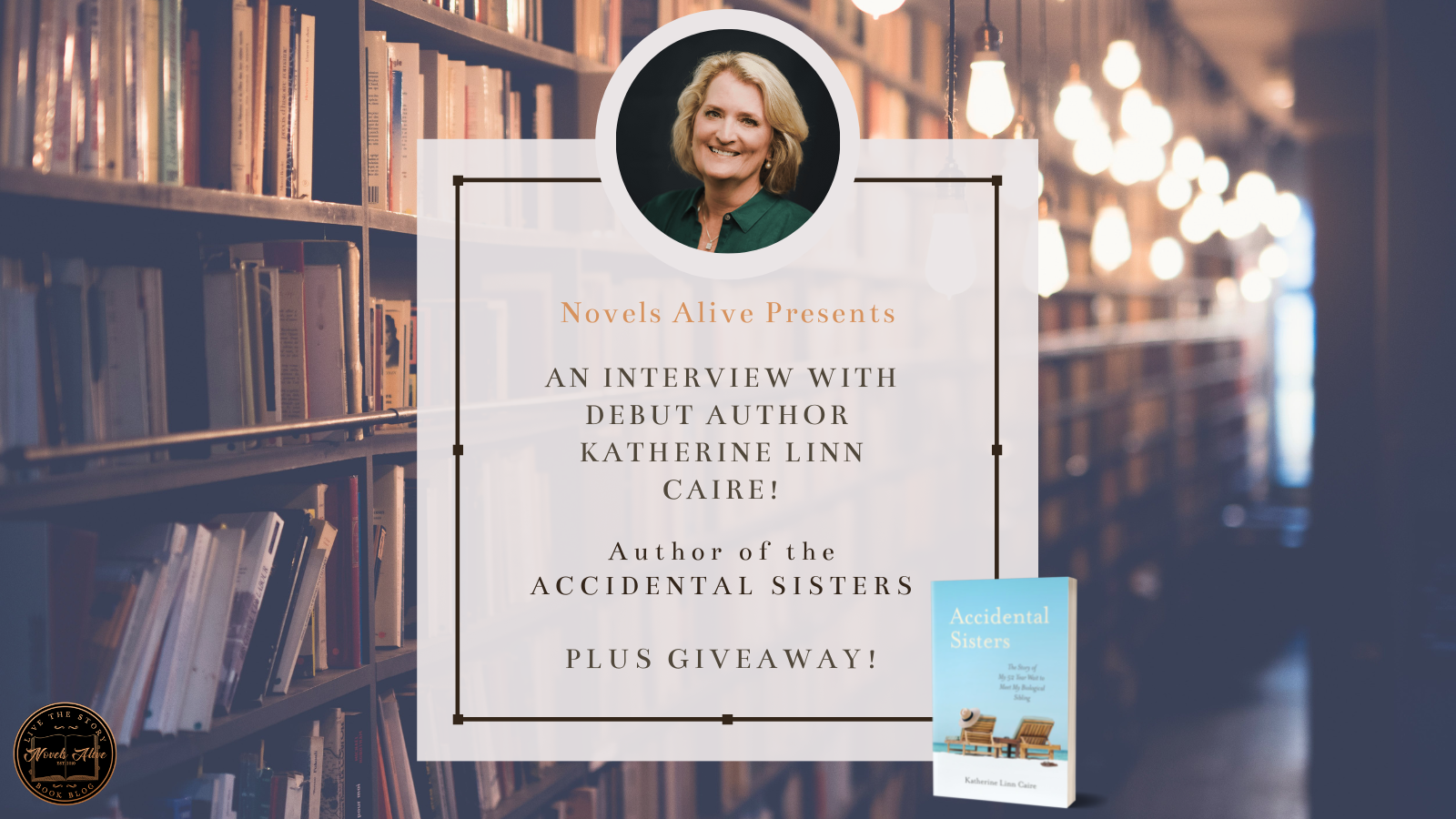 Today we welcome debut author Katherine Linn Caire to Novels Alive! Katherine debuts her memoir, Accidental Sisters, on August 26th, so be sure to check it out!

My book, Accidental Sisters, is a memoir, so I think it’s fair to say they are intertwined. It was important for me as I was writing for readers to understand the range of emotions that the main characters experienced in this story, but there were so many serendipitous events that caused our story to unfold!

The protagonist! That character is always the most developed in a book, so as an author, it’s easiest to slip into those shoes to really feel, hear, know—what the protagonist is experiencing during the storyline. It’s also critical to know where your main character is coming from, long before the storyline begins. That is what explains how he or she reacts to the events of the story as they unfold!

It would be Accidental Sisters. The fact that it is a true story and the series of highly unlikely events that happened to bring my sister and me together is in the realm of things you can’t possibly make up. I think that would make for a very powerful film.

Yes! I am in the beginning stages of creating that novel right now. I have always wanted to write a good old Whodunit, and after Accidental Sisters launches, you will find me in front of my laptop, putting together a completely made-up mystery novel, pretty much the opposite of a memoir!

Ahh- it was a very busy time because our youngest daughter was engaged for over a year during covid, then got married while Accidental Sisters was going through the editing stages. As it was our first child to get married, I had quite the upward learning curve as the MOB. I just had to be extremely organized!

Yes. The book begins with the fact that I was adopted at birth. My brother that I grew up with was adopted as well, just under four years later. I wrote a chapter about “picking out my brother”, because my parents had set it up so that I went to the adoption agency and got to go up to the room with cribs full of baby boys and pick him out. Of course, it was simply a guise to make me feel like I was part of the decision process, at the ripe old age of 3 and ¾. As much as I love to tell that story, it did not logically flow well in the memoir.

It took me a while to figure out when I wrote best; what time of day, what atmosphere, all of the variables. After a couple of months- maybe even half a year- of trying different times of the day and night, sitting in different rooms and even out on our back deck, I realized I was the most creative and productive when I set up my “writing altar”, a place where I always wrote, with a beautiful view out the window. Unfortunately for my husband, that meant our breakfast table had become something other than a place to eat breakfast. My most productive writing is now always during early morning, before food, with a good cup of decaf by my laptop.

“Old Man and the Sea” by Ernest Hemingway and “The Message of April Fools’” by Lee Foster.

A LOT! You wouldn’t think when an author is writing a memoir that that would be the case, but my sister’s and my story involved a lot of sleuthing to answer many questions about what really happened. I also spent a lot of time researching the people and places involved in our story, to make sure I got the facts right, but also to put things into accurate historical context.

I absolutely love writing. I have done a lot of things in my adult life, but as an occupation, being a writer trumps them all.

My college degree is a BBA in Finance with minors in Art History and Economics. Not your typical author’s courses of study. Not surprisingly though, my favorite teachers that I could count on one hand were those I had for my English and Writing classes.

A desire to tell a true story that came about through a very unlikely course of events. Relinquished at birth to Catholic Charities in 1959, Kathe Linn Caire adores her adoptive family and has never considered searching for her birth parents. At age fifty-two, though, a sudden pull to learn more about her medical history sends her on an unexpected journey.

Kathe isn’t interested in learning her birth parents’ identities, just the details of their health. But what begins as a simple investigation takes a startling swerve when the social worker who sends the records fails to redact a crucial bit of information. Suddenly, Kathe has more information than she bargained for. And to her surprise, she finds herself combing through vital records, researching every lead she can get her hands on.

When an Internet search results in a dead end, Kathe’s daughters present her with a birth mother search as a gift for Mother’s Day. What Kathe discovers transforms her. With each piece of information she uncovers, the mystery of her birth parents’ identities unravels a little more. But when her investigation uncovers a half-sister that Kathe never imagined existed, she must decide: open her heart and mind to a stranger who shares her DNA, or walk away without challenging her long-held beliefs about what it means to be part of a family. 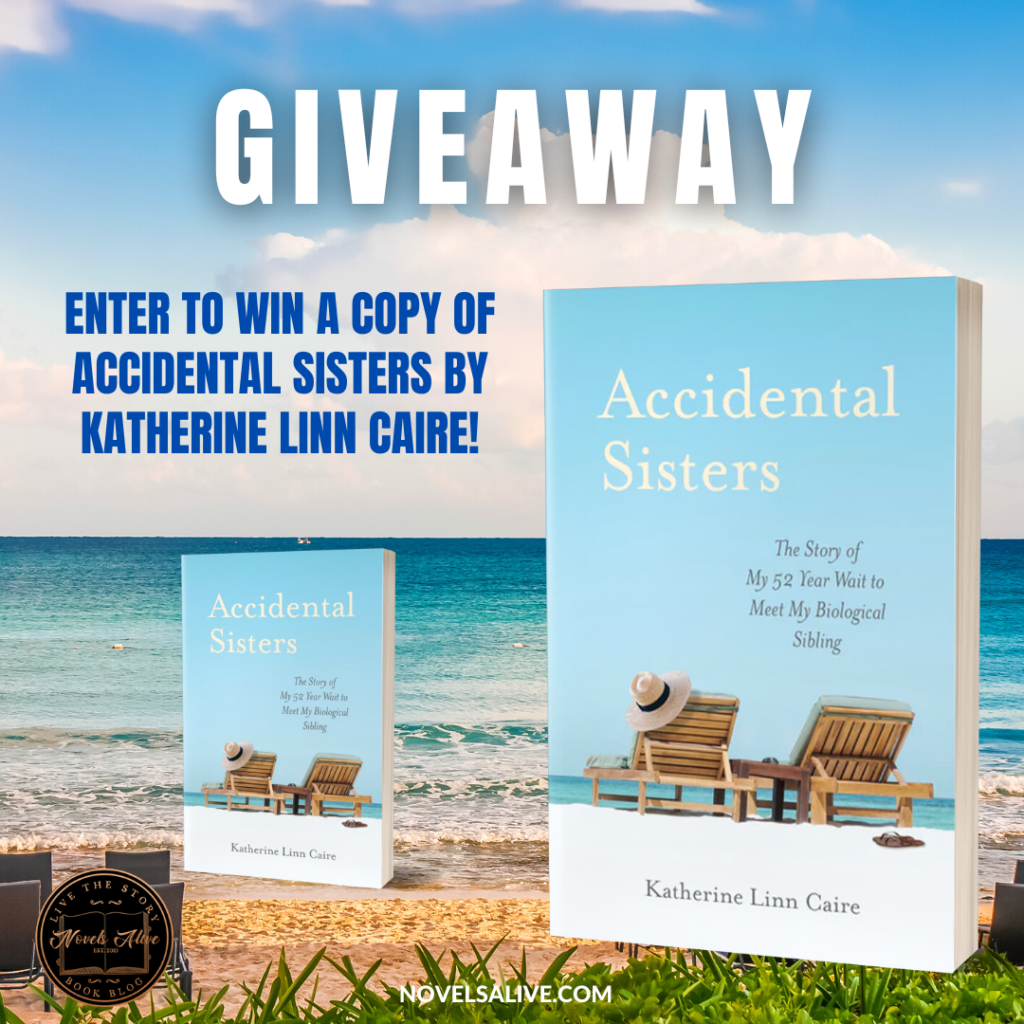 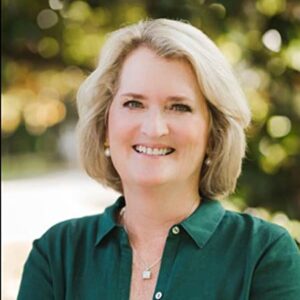 Katherine Linn Caire was born and raised in Des Moines, Iowa. She attended Southern Methodist University in Dallas, Texas, where she swam for the Mustangs and received her BBA (Finance), with minors in Art History and Economics.

Although her career has spanned the gamut from commercial banking to advertising account executive, calligrapher/artist to tennis official, she has found her true delight in putting pen to paper.

She lived in Dallas for nearly three decades, where all three of her and her husband’s daughters were born and raised. The family moved to beautiful Nashville, Tennessee in 2004 where she lives with her husband, Don, and their two canine rescues, Waltzing Matilda and Marathon Molly.