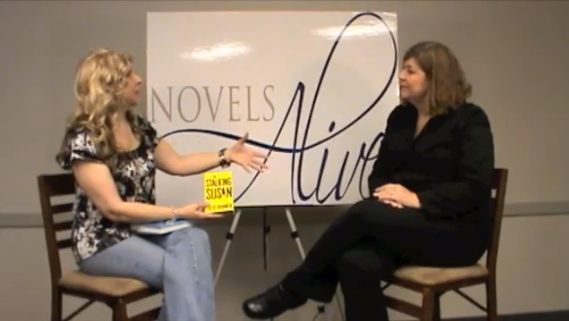 Nationally acclaimed, award-winning investigative reporter Julie Kramer takes readers deep inside the competitive world of television news.  In this unique world desperation rules and searching for the truth can be hazardous to one’s health—especially for her smart and sassy heroine, Riley Spartz.  In SILENCING SAM, which hits the shelves June 22nd, Riley becomes stuck between a rock and a hard spot when she butts heads with a gossip columnist and end up on the hook for murder one.  Throw in a tall-Texan with a state-sized ego, and there’s a maelstrom about to spin out of control.  Fast-paced, bold, and fresh this story delivers a heart pumping thrill ride sure to satisfy.

In book two of Julie’s series, MISSING MARK, Riley searches for a missing groom.  She does this on a whim and lands herself in the middle of an explosive murder investigation that will give her the hottest ratings in town.  There is only one problem…she might not live long enough to tell the story.

Tami Hoag says that MISSING MARK has a [quote]“fast pace, a smart heroine, and fresh voice.  Julie Kramer has what it takes to keep readers turning pages.”[/quote]

In her debut novel, STALKING SUSAN, Julie hit the publishing ground running as her savvy heroine Riley, tangles with a serial killer who has gotten away with murder for years.  Riley pulls out all the stops to nail this psycho.  When Riley suspects the killer has moved personal items from one victim to the next as part of an elaborate ritual, she stages a bold on-air stunt to draw him out and uncovers a motive that will leave readers breathless.

Julie Kramer’s Riley Spartz series is a must read for a pulse pounding, deadpan humor filled thrill ride this summer.  Don’t miss it!