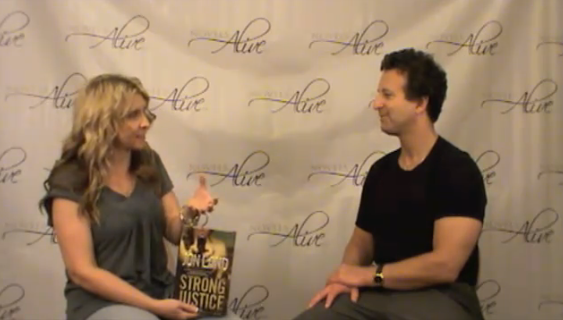 Internationally acclaimed, Bestselling Author Jon Land has what it takes to be called “the greatest thriller writer alive today” by Bookviews. With seventeen national bestselling hits and millions of books in print, Jon’s newest series featuring Texas Ranger Caitlin Strong delivers edge-of-your-seat, unforgettable suspense through a character that reaches deep into your gut.

In the first book of the series, STRONG ENOUGH TO DIE,

[quote]Caitlin is a fifth-generation Texas Ranger, proud to wear the badge of her father and grandfather – until a deadly shoot-out along the Mexican border causes her to question her calling.

“Five years later, Caitlin is still trying to purge herself of guilt from the day that ended her Ranger career. But a shattering discovery will reopen old wounds, and Caitlin’s renewed investigation into the truth behind the bloody desert firefight uncovers a terrifying plot that reaches into every home and threatens the very core of the country. Her only hope for success – and survival – is to team up with Cort Wesley Masters, a deadly outlaw who has every reason to want her dead. But he also holds the key to the truth she desperately seeks in the anguished brain of an amnesiac torture victim. Caitlin’s tormented quest for redemption takes her to a dark world, ranging from Washington to Bahrain to the wastelands of Mexico, as she finds that the strength to live comes from learning how to die.”[/quote]

The complex character of Caitlin Strong is sharply defined by her family’s service to law enforcement. Texas Rangers are the toughest of the tough who go after the worst of the worst, a job that Caitlin goes at with no holds barred. This makes her an unusual heroine in today’s hero driven thrillers.

Book two of the series, STRONG JUSTICE, Caitlin pursues [quote]”Justice the Ranger way. She takes on the case of a Mexican girl on the run from white-slavers. For Caitlin, the case evokes memories of her legendary grandfather’s run with the Rangers, even as it brings her face-to-face with a serial killer who’s left a trail of bodies along the Mexico border. Pursuing the killer brings Caitlin to a sleepy Texas town suddenly riddled by violence and to the site of a major water find. The connection between these two disparate places lies buried beneath the plains of West Texas: a deadly weapon with the potential to give a new enemy the means to terrorize the United States. Her grandfather’s past collides violently with Caitlin’s present as she fights to save her world in the same border town where he fought to save his. Caitlin will learn, just as he did, that only strong justice can save the day. But this time, outmanned and outgunned, even that may not be enough to keep Caitlin Strong – and the country itself – alive.”[/quote]

Writing is often a solitary career, but Jon, a graduate of Brown University and a Martial Arts expert, does not sit on the sidelines sequestered with his computer. He plays a dynamic roll in many organizations, including International Thriller Writers, where he is passionate about their mission to promote Thriller’s as a genre all to its own. Jon is also known to go above and beyond the call of duty in helping other writers.

Jon Land is a writer with heart and passion. A master of storytelling and suspense. And an author strong enough to win hands down in NovelsAlive.TV’s book. You don’t want to miss his Caitlin Strong novels or his other twenty-some kick-ass thrillers.

P.S. Book three, STRONG AT THE BREAK, is in the works at the publisher.