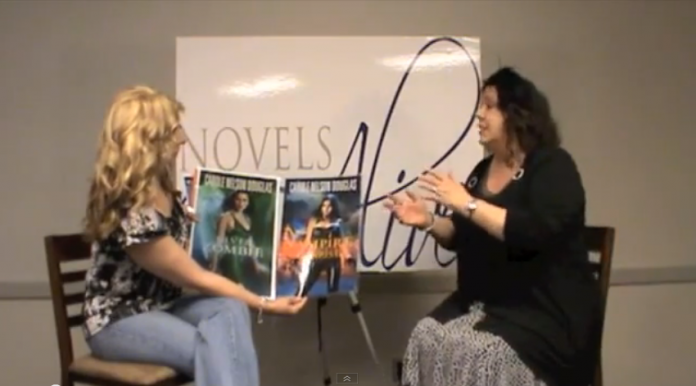 Mystery? Thriller? Fantasy? Sci-Fi? Romance? Historical? Paranormal? Carole Nelson Douglas, bestselling, award-winning author of over sixty novels has mastered them all with her wit, humor, and fantastic imagination that takes her readers from Zombies to the adventures of Midnight Louie, a cat and “hard-boiled” Las Vegas PI who’s been dubbed as “Sam Spade with hairballs.”

And yes! As you might guess this innovative author and noted journalist is an avid animal lover. Her Midnight Louie Series is based upon a real-life alley cat whose rescuing-owner Carole interviewed in the St. Paul Pioneer Press. As Carole herself phrases it, she and her husband are currently, “kept as pets in Texas by several quadrupeds.”

NovelsAlive TV had the distinct pleasure to interview Carole about her newest releases in her Midnight Louie and her Delilah Street Series featuring a host of paranormal characters with attitude and style.

First up and just released in August is CAT IN AN ULTRAMARINE SCHEME.[quote]

“Temple Barr, publicist extraordinaire, is itching to bring off her most dangerous and exciting assignment, helping to launch an endeavor that many a Vegas showmen have dreamed of: a Las Vegas mob museum/casino.

While city powers-that-be hem and haw over doing an official project on the subject, the Family Fontana plans to connect two hotels with a  “Chunnel of Crime” featuring an underground speakeasy,  a fast “ride” through Vegas crime history by Gangsters custom limo service, and other fun attractions.

With Temple’s magician-counterterrorist ex-lover, Max, gone missing and her new fiancé, radio shrink Matt Devine, in Chicago for week-long media gig, Temple must depend on “the Vegas Strip Irregulars,” a posse of cats, to solve murders old and new that smack of mobs vintage and all too contemporary. Success, or failure, could cost Temple her life, and all nine of Louie’s.”[/quote]

But maybe you want to start at the beginning or in the very least start with CAT IN A TOPAZ TANGO that came out in April.

[quote]”Temple Barr and Matt Devine make a cozy engaged couple, and the feisty redhead is all for her handsome radio host fiance staring in a week-long televised Las Vegas charity event, “Dancing with the Celebs.” But while ex-priest Matt struggles to master the sexy moves of the tango, a killer stalks the dance floor. Not only is Matt in danger, but so is the lovely tween Mariah, daughter of homicide cop C. R. Molina, who is dancing in the Junior Division of the show.

And so Temple gets dragooned into resurrecting her kicky teen persona, Zoe Chloe Ozone, now an Internet hottie, to ensure Matt and Mariah don’t foxtrot into a fatal misstep.

Where is Louie in all this? Well, he’s out and about, proving that he’s still the cat’s meow. But he’s got his paws full as he tries to keep all the various players in his little troupe from dancing right into death’s arms…”

Did someone say Zombies? Yes we did, and you don’t want to miss them. Set in a futuristic Las Vegas where irony is hot and you can get the absolute best Urban Fantasy drinks known both the real and supernatural worlds. (I won’t spoil the surprises, but an Albino Vampire Cocktail sounds utterly divine.) The heroine of the series, Paranormal Investigator Delilah Street, makes a kickass bartender.
In VAMPIRE SUNRISE, Delilah’s under the gun.

[quote]“Werewolf mobsters and vampires run Vegas, but that’s yesterday’s news for Delilah Street, paranormal investigator. What’s truly fearsome is her bloody discovery of an undead evil rooted in ancient Egypt. Now, with her lover Ric fighting for life after a grim battle, the chips are down.

But Delilah is a born winner who has never let a little danger throw off her game, and she’s been learning fast since she came to Sin City. Her affinity for silver is making mirror-walking a real breeze, and being forced to accept the albino rock star sorcerer Snow’s Brimstone Kiss has ramped up her powers to a startling new level. With the help of her trusty uber-wolfhound Quicksilver, not to mention the orange demon parking valet Manny, Delilah is determined to solve even more paranormal secrets, and hopefully save the few innocents left in town. But can Delilah win her high-stakes gamble for life and love against ancient gods and lethal supernatural odds?”[/quote]

Then get ready! SILVER ZOMBIE is coming in November.

[quote]“What happens in Vegas stays in Vegas—at least that’s Delilah Street’s hope. With Sin City’s vampire and werewolf mobs wanting to cash in her chips once and for all, she’s retreating with her partner Ric Montoya and half-wolfhound Quicksilver to her Kansas birthplace. Unfortunately, when it comes to finding trouble, there’s no place like home…

It doesn’t take long before Delilah realizes she’s not in Vegas anymore. Zombie cowboys and spectral cattle drives are kicking up dust, the local weather girls are total witches who forecast perfect storms, and some Hollywood fanatic is recasting zombies as the greatest stars of the silver screen. And speaking of silver, Delilah’s special affinity for the all-purpose monster-repellent leads her posse straight down a silver brick road—and into a not-so-fun house of mirrors—putting her face-to-face with her dicey past and a mystery woman named Lilith, who’s a real dead ringer for Delilah. The key word being dead.”[/quote]
Whether you’re after a feline super-slueth or a smart and sassy investigator in a gritty and wildly imaginative Las Vegas, Carole has the book for you. Fantastic Fiction.com states [quote]”All of Douglas’s novels use a mainstream matrix to blend elements of mystery or fantasy with contemporary issues and psychological realism. A literary chameleon with an agenda, Douglas has reinvented the roles of women in a variety of fiction forms.“[/quote]

So delve into a little mystery full with twists and thrills this Halloween Season with Carole Nelson Douglas.