Phenomenal answers! A huge and heartfelt THANK YOU, to Lorraine Heath for taking the time to participate in Novels Alive, in association with our sister site, Be My Bard’s “10 Questions With…”

I rely on my imagination as well as my personal definition of what constitutes a hero. Family oriented, conviction, madly in love with the heroine. Now, I may use examples from family or friends or others to give texture to my characters. For example in THE LAST WICKED SCOUNDREL my hero likes to row along the Thames every morning. One of Queen Victoria’s advisors was known to do the same thing. In PARTING GIFTS, the children’s uncle clears his throat very loudly to keep them in line. I have an uncle who used the same approach to get me to settle down when I was much younger.

Interesting question. I would have to say the Earl of Claybourne from IN BED WITH THE DEVIL. He’s such a scoundrel and had such a singular upbringing on the streets until he is taken in by an old gent who believes Claybourne is his lost grandson. Claybourne has his doubts but he has a strange honesty about him. He is determined to look after the title and estates because of the old gent’s faith in him. I found him to be a rather complex and intriguing character. As did the heroine, Lady Catherine Mabry.

Would have to be Chase from Sarah MacLean’s Rules of Scoundrels series.

Crying. Comes from my mother instilling in me the belief that the best stories won’t half make you cry. Although I do like to sprinkle laughter and the need for a cold shower throughout the story, I want it to end with tears.

Rafe Easton fromLORD OF WICKED INTENTIONS. He kept intruding while I was writing WHEN THE DUKE WAS WICKED, the story that followed Rafe’s. I would find myself slipping into Rafe’s character, writing from his POV. He was a very strong character.

I’m not convinced that Social Media brings me new readers. However I think it keeps me in touch with my readers and ensures that they know what is happening with me. I can’t imagine anyone who doesn’t read my books following me on Facebook or Twitter. I see it as more of a connection with my loyal readers. I love communicating with them and hearing from them.

Unfortunately, I think only a few authors have the skillset needed to produce a quality book without input from someone invested in the outcome of the product. With traditional publishing, I have an editor who is invested in my work. She takes the time to help me strengthen my work. When we are writing, we tend to become too close to the story and sometimes we miss opportunities to bring more depth to the tale. I may at some point dip my toes in the indie pool but for right now, I’m still most comfortable with traditional publishing.

I would think readers prefer the more romanticized version. I do. I don’t expect the cover to be a true representation of what happens in the story. The cover is about marketing, grabbing someone’s attention so they’ll pick up the book and give it a read. The words then, hopefully, have them shifting to the author’s name when determining what to buy. In other words, a cover may make me read an author for the first time but if she draws me into her story, after that it wouldn’t matter if her cover was a paper. After that, I’m buying based on name.

I would like to see more attention given to the pirating of books. I’m really not sure why it’s not elevated to the level of movies, music, and TV.

My next release is a novella that completes the Scoundrels of St. James series. THE LAST WICKED SCOUNDREL is William Graves’ story. It’s available electronically beginning January 7. Winnie, the Duchess of Avendale, fears she is going mad and turns to the noted physician William Graves for help. What begins as a mission of mercy soon turns into a night of passion, but a dark secret threatens to destroy them and all they hold dear.

The eagerly anticipated final story in the Scoundrels of St. James series! 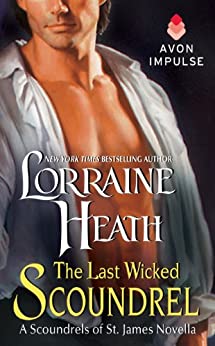 William Graves is the last of Feagan’s scoundrels. A one-time grave robber turned royal physician, he has devoted his life to saving others, because he knows there is no way to save himself. Especially not around a lady such as Winnie. Though underserving of her touch, he cannot resist, his passion cannot be tamed…even in the face of certain danger. Winnie, the Duchess of Avendale, never knew peace until her brutal husband died. With William she’s discovered burning desire—and the healing power of love. But now confronted by the past she thought she’d left behind, Winnie must face her fears…or risk losing the one man who can fulfill all her dreams.

WHEN THE DUKE WAS WICKED

IN BED WITH THE DEVIL

Lorraine Heath has always had a soft spot for emotional love stories. No doubt because growing up, watching movies with her mom, she was taught that the best movies “won’t half make you cry.”