Novels Alive in association with our Sister Site, Be My Bard would like to offer up a very warm and excited welcome to this week’s guest for  “10 Questions With…”, the enormously talented and funny, New York Times Bestselling author—Meredith Duran!  Welcome Meredith!

We’ve all pondered the age-old question of which came first the CHICKEN or the EGG?  As a writer, when creating a new story, which tends to come first for you—the CHARACTERS or the PLOT?

If I’m doing it right, they arrive simultaneously, because the characters demand the particular plot, and vice-versa! What is a good plot, after all, save one that leads characters into direct confrontation with their own fears and weaknesses?

That said, inspiration usually makes its first visit in the form of a scene or an image that never appears in the final draft. For FOOL ME TWICE, the inspiration was a conversation that appeared fully formed in my imagination, during the Duke of Marwick’s visit to a strange woman who has been sending him notes from prison. The final draft still retains a prison scene, but it’s very different than the original. What remained unchanged, however – and perhaps what that scrapped scene helped to establish in my mind—was the fundamental tension between the two characters. She needs the trust and help of a man who has lost his ability to care about or trust anyone.

It’s inevitable that small bits and pieces of a writer’s own personality will make their way into the characters they create. But if you had to write yourself into one of your books, would your character most likely be the hero/heroine, the steadfast best friend, the comedy relief, or the villainous mastermind?

If someone wrote me in as the heroine, I’m quite sure the book would bomb. I can envision the reviews right now: “Loved the hero, but the heroine kept insisting on ‘alone time’ so she could finish reading a book. Suuuuper boring.” Ha!

I would love to imagine myself as an enterprising villainess, preferably with loads of glittering rings and a small lapdog that would sneer, snarl, and yip on my command. This is a very Disney-esque villainess taking shape in my mind right now… I assure you, she’s got fabulous hair and long, unbreakable nails. Her polish never chips!

I’m not particularly interested in creating surprise twists when it comes to the villain. What does interest me is exploring, as much as I’m able, the traces of villainy that lurk in all the ostensibly ‘good’ characters, particularly the hero and heroine. None of us is perfect, and I find characters most fully three-dimensional (and fascinating) when their flaws are as apparent as their virtues.

What an amazing question! There are so many possible answers here. Alas, too many of the novels I enjoy take place in time periods when smallpox would lay me flat!

I’m going to have to pick THE LION, THE WITCH AND THE WARDROBE, by C.S. Lewis. The Narnia series fascinated me as a child. I’m sure the sightseeing would be beautiful.

I’d spend a day on the spaceship Moya, in the universe of “Farscape.” Every day we discover more planets that occupy habitable zones similar to Earth’s, and I can’t tell you how disappointed I am that I won’t be around to read about our first explorations of other worlds.

Also, “Farscape” is hilarious and romantic and wonderful!

Every time someone asks me this question, I feel the need to point out that Susan Johnson’s historicals have always been quite explicit (and popular, and amazing. You have to love a historical writer who footnotes her fiction). But I agree with you that the trend has swung toward increasingly explicit language, and I’m grateful for it. If we as readers and writers feel that sex is an important aspect of a developing relationship, then we should own that conviction. Flowery euphemisms sometimes feel like the very opposite: a distancing mechanism that allows us to veil the sex beneath layers of pastel gauze.

However, ‘purple prose’ isn’t necessarily bad. As a writer, I’m trying to capture an experience. Sex—good sex, bad sex, any kind of sex—isn’t an experience reducible to the physical act. It’s always mediated by an astoundingly complex bundle of emotions, and where emotion is involved, precision (linguistic or otherwise) is not only impossible but inadvisable. I’ll certainly be a stout defender of metaphors and analogies and euphemisms and poetic flights of phrase where they seem to communicate the experience more clearly, rather than obscure it.

But to answer your question: thanks to the trend toward more explicit language, I do feel less hesitant to employ certain old Anglo-Saxon favorites when the scene seems to call for it!

Reviews of any kind are welcome, because there’s nothing more unnerving than the feeling that you’re writing into the silence of the void. I say with total honesty that public criticism is the easiest kind of criticism for me to bear, because I’m far harder on my own work than any review I’ve ever read. Also, the fact that I have loved books others have hated, and hated books that the whole world seems to love, helps me receive both negative and positive feedback with equanimity.

Only once did a review truly throw me for a loop. The reviewer speculated that I had “phoned in” the book. This sounds like a marvelous skill, and I wish I knew how to do it. I’d probably be better-rested and so much calmer when on a deadline!

There are several. I’m a pretty omnivorous reader; if you looked over my bookshelf you’d see equal helpings of historical and paranormal romance, YA, UF, commercial, women’s, historical, and literary fiction. I think we dream about what we read about. I’ve had ideas that belonged in multiple of these subsets of fiction.

Can we talk television instead? I’d do any number of extremely awkward, inconvenient, and/or embarrassing things in order to see Dorothy Dunnett’s Lymond Chronicles made into an hour-long drama series, preferably on HBO. Set in the sixteenth century, this series roams all over Europe to the Middle East and North Africa, centers on a man (Francis Crawford, Lord Lymond) who (I’m quite sure) has served as the template for dozens of romance novel heroes, and even culminates in a heart-wrenching HEA. Oh yes, I’d be GLEEFUL to see that made into a series. 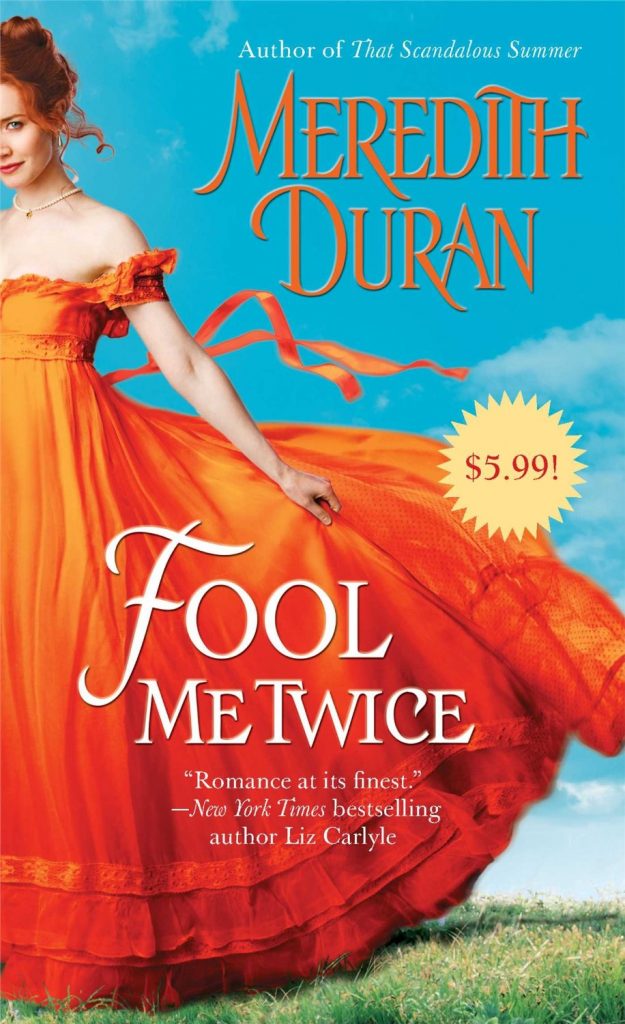 FOOL ME TWICE is my next historical, out on March 25th. It follows two characters introduced in my last release (That Scandalous Summer): Olivia, a redheaded bluestocking who’s not what she appears; and Alastair, the Duke of Marwick, a dark and tortured widower whose sanity is hanging by a thread. As our enterprising heroine, Olivia is determined to win her freedom from a villain who’s been hounding her for years. She has cause to believe that the weapon she needs is in the possession of the reclusive duke, so she infiltrates his household in the guise of a maid. What Olivia doesn’t count on is Marwick himself—a man bent on revenge, who has surrendered any pretension of honor. In his eyes, an interfering, busybody servant is fair game—not only for revenge, but also for seduction. Indeed, why not both…?

Meredith Duran grew up enamored of British history. At thirteen years old, she made a list of life goals that included writing romance novels, trying sushi, and going to London to see Holbein’s portrait of Anne Boleyn. Now a doctoral student in anthropology, she is happy to report that all three goals have become her favorite things to do. When not studying, doing fieldwork in India, or working on her next novel, Meredith can be found in the library, browsing through travelogues written by intrepid Englishwomen of the nineteenth century.