It is always a real pleasure when this week’s guest stops by to visit  and Novels Alive and Be My Bard. Please extend a warm and fuzzy welcome to USA Today Bestselling Author…the “Fantabulous” Renee Bernard!

I wish I could say flowers….but there is just something about dark chocolate that whispers to my soul.

I’m heading to ENGLAND! Brace yourself, Brits! Though I’ll be off the beaten path and soaking it in with total abandon! Do I need a reason? I mean, the why is that I think nothing inspires a writer more than touching those doorways, breathing in the air and walking those paths… Nothing.

I think my characters are their own people. I really don’t push people in my real world over into their shoes too much. (You should see the cutting look I just got from a certain hero of mine…. Oh, my!)

The best advice was to ignore all advice about writing and trust your own methods, your own imagination and your own process. It’s a journey and writing isn’t selling real estate. This isn’t a system. It’s art. And Art is messy. I think that covers it. The worst advice was from an author who said that readers were stupid and to just pick one year to research for your historical romances and then set all your stories in the same year so you don’t have to research. She is not a voice I turn to in a crisis…LOL

I was going to kill a heroine in childbirth…but my hero put a big old squash on that notion. It was a secondary book but he wasn’t having it. It was a hard lesson in where I can push and where it costs me more than the literary thrill of murder.

Always tempting to add that incredible drama and tension—but romance readers can be VERY unforgiving on that point.

Romances are relatively new, aren’t they? Tragic love stories with moral underpinnings less so…but our “classics” are a fun slice! I think I’d be drawn to something completely outside the box like taking classic romance themes and pushing them into alternative futures and steampunk-like worlds of my own making. I think I’m happier if I’m reinventing rather than just moving things around…because I’m crazy that way.

It’s a quiet dance around my office, a quick text to my husband and friends, and then a big sigh of relief…before I catch my breath to get ready for the next phase of work, of edits and marketing and promotion and the next book. There is Always the next book. I think I need to try to learn to celebrate more but as this is my building phase and I haven’t seen the top of the mountain yet, maybe that’s coming.

Not a fan of mosquitos and bugs. I’d lean hard to the haunted castle in Europe. Even if I froze to death or starved, I’d do it in style! (and I’d have great phantasmic muses to keep me company!)

I’d want to be stranded with my best friend and twin sister, Lisa Watson. Because together, we could make any survival scenario fun. But on a loftier, philosophical note, I would probably say that for my stranded poker table I would insist on Edward DeVere, Earl of Oxford, Stan Lee, Joseph Campbell and Elizabeth Gaskell. We would talk about writing and character constructs and the workings of myth and superheroes until we passed out in a very happy pile.

I’m finishing DEVIL MAY CARE, the follow up to DEVIL TO PAY in The Eternity Gambit Series. The book centers on a Temptress employed by H.E.LLc and her Take Down Mission in which she is unbeknownst to her, assigned to tempt a righteous man. For readers who love Good Guys, Lillith has one in the crosshairs—but since she’s never seen one, she’s not going easy on him. It’s a romantic chase with tons of comic demonic twists and let’s just say, Jackson Kent will have to be on his best behavior to tame this bad girl!

Next up is my new series, The Duchess Club. So I think it’s THE WILD DUCHESS to kick things off! I’m back to my historical romance roots and I’ve decided to just have fun with it! 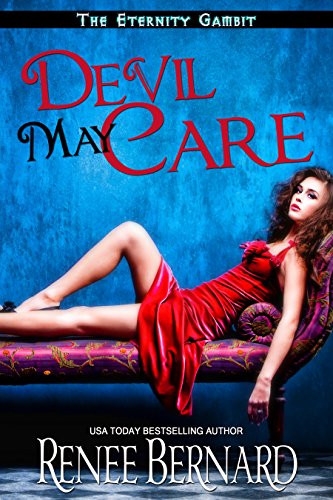 When you are a Take Down Agent in the Temptations Department in H.E.LLc, the good news is that you get out of the office every once in a while. The bad news is that there isn’t a human being targeted and “served” who is smiling after you’re done, so customer appreciation isn’t one of the perks.

Lillith is the best demon Temptress in the business and has a sexy scorched earth policy that leaves nothing standing in her wake. So when her next assignment looks like ‘low-hanging fruit’ as a former professional football player and sugar sweet do-gooder, she’s prepared for a quick record-setting Take Down. Unfortunately, no one has let her in on the twist.

Her target is actually a Good Guy, something Lilly has never seen. So this is going to be one for the books as Lilly faces the unthinkable: She’s the one in danger of falling in love!

4-STAR REVIEW: LUCY ON THE WILD SIDE by Kerry Rea