What drives your story forward in your books the most, the characters or the plot?

We all love winners. USA network says, “Characters Welcome.” We pull for the underdog, regardless of the sport or the plot. So, for me, it is all about the characters. The plot is important and is the force that compels your character to act and change and be a hero, or not. My new novel FOREIGN AND DOMESTIC is about the character, Chayton “Jake” Mahegan, an army captain who mistakenly, or perhaps not, kills an enemy prisoner of war as Mahegan’s best friend is decimated by a roadside bomb. Mahegan is dismissed from the service and in North Carolina searching for the American company that made the bomb trigger that killed his buddy. Struggling with post traumatic stress, Mahegan is wired tight as he becomes a suspect in a murder investigation, involves himself with an actress from a local theater production, and discreetly follows a private military contractor who has found pirate gold in the Outer Banks of North Carolina.

If you were a character in one of your books, which would you be? The hero/heroine, mentor, villain, love interest, etc.

I would be the mentor. I feel that way as the author anyway. Sometimes my hero will want to do something out of character and sometimes I have to get him back into his place while other times I let him be unpredictable. In FOREIGN AND DOMESTIC, Mahegan’s mentor is a two star special operations general. That’s who I would be.

FOREIGN AND DOMESTIC is both timely and intense. A private military contractor with the dirty job of clearing a bombing range in North Carolina has secretly shipped undocumented detainees, called “ghost prisoners” to their enclosed compound. The detainees figure out how to escape at night and conduct attacks against soft targets and then return at night. Jake Mahegan closes in on the contractor and the detainees, but not without a fight.

I believe that the villain must be vile enough to create tension in the story as well as provide contrast to the goodness of the hero. In every book I attempt to make the villain evil, but with at least one redeeming quality. Mullah Adham, aka Adam Wilhoyt, who calls himself The American Taliban is a twenty something year old computer genius that has joined forces with Islamic radicals overseas. He was Mahegan’s target. He controls the ghost prisoners. While Mahegan is seeking justice for his friend, the evil traitor, Wilhoyt, is giving terror missions to the ghost prisoners via Twitter messages. They offset each other, but have a common intersection, as well. They both can reach into that dark place and be ruthless. And remember, villains are heroes to some people. Evil is real. Villains are real. And some people admire that.

From my Threat series there was a woman, Meredith Morris, who fans really enjoyed. She was smart, pretty, funny, caring and good. Yet, she cheated on my hero with the Vice President, who was a weasel. She had to go.

Not really. I love writing thrillers and so will keep at it. When I was a child I enjoyed reading everything I could get my hands on, so perhaps I’ll give a YA thriller a try, but at the moment I’m busy writing Jake Mahegan #3.

As with the rest of us, you have a real life to live. So, in your most recent book, what was happening in your life and how did it influence your writing?

I have a high profile government job, so I have to make sure I schedule the time to write early in the morning or late in the evening and on weekends. Writing, therefore, consumes much of the time I would be spending with family or working out. Thankfully I’ve got a supportive family and can find the time to surf every now and then when the waves are good.

What is your view on independent (self) publishing? What do you feel are the benefits/drawbacks for readers and conversely, authors?

I believe in the market and that the market will sort out what’s good and what is not. All forms of publishing are legitimate and self-publishing has given rise to many authors who might otherwise not have been found.

Can you judge a book by its cover? How much input do you have on the look/feel of your cover?

I believe the cover is very important, especially for new authors or authors attempting to breakout. Americans are loyal and at the same time impulse buyers. If you’re not one of the authors to which a reader might be loyal, you need a good cover to make the reader take a chance on you.

Tons. Research is one of my favorite parts of writing. Not only do I enjoy learning new things, I like being creative with the information. For FOREIGN AND DOMESTIC I spent two weeks in the Outer Banks walking the ground where the book takes place. It was similar to doing a battlefield terrain walk, only before I wrote the battle. Fun.

My characters define me as an author. Particularly my new hero, Chayton “Jake” Mahegan, a Native American from Frisco, North Carolina in the remote Outer Banks. He’s complex and unpredictable, but he will deliver justice. We all want justice in this world and Jake Mahegan delivers.

I’m a surfer. I probably go surfing 40 times a year. I’ve surfed in Australia at Snapper Rocks and Byron Bay; France at Biarritz and Cote de Basques, Dominican Republic at Encuentro, Costa Rica at Avellanos, Marbella, and Tamarindo, Hawaii at Sunset Beach and Barbers Point; California at Santa Cruz; and of course Virginia Beach and North Carolina at most spots. I love the camaraderie and the thrill. As a former paratrooper I guess I need that adrenaline rush, which I also try to convey to my readers!

I’ve already turned in THREE MINUTES TO MIDNIGHT, Jake Mahegan #2 and it is set for publication next year. Jake Mahegan #3 has a working title of NO BROKEN PROMISE and is about the daughter of one of Mahegan’s Delta Force buddies. Her name is Promise. And Mahegan lives by a code of protecting those with whom he served. 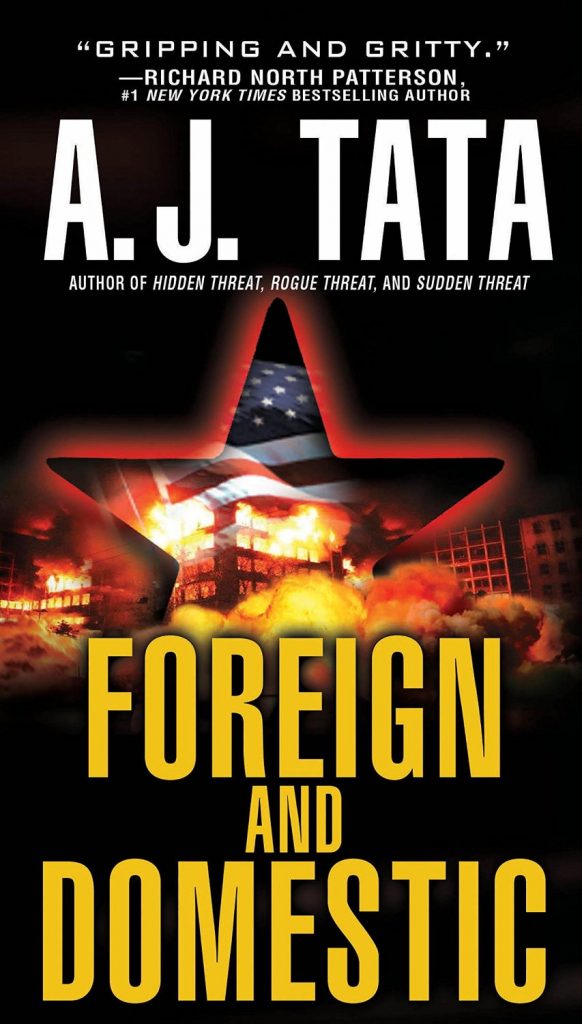 One year ago, Captain Jake Mahegan led a Delta Force team into Afghanistan to capture an American traitor working for the Taliban. The mission ended in tragedy. The team was infiltrated and decimated by a bomb. An enemy prisoner was killed. Mahegan was dismissed from service—dishonored forever. Now, haunted by the incident, Mahegan is determined to clear his name. The military wants him to stand down. But when the American Taliban returns to domestic soil—headed by the traitor who ruined his life—Mahegan is the only man who knows how to stop him. Outside the law. Under the radar. Out for vengeance. . .

Brigadier General (R) Anthony J. Tata graduated from the United States Military Academy in 1981 and retired after28 years of uniformed service on 1 June 2009. Among his many assignments, Tony commanded a paratrooper battalion in the 82nd Airborne Division, an air assault brigade in the 101st Airborne Division and served as the Deputy Commanding General of the 10th Mountain Division and Combined/Joint Task Force-76 in Afghanistan. BG Tata has deployed on combat missions and operations in Afghanistan, Kosovo, Macedonia, Bosnia, Panama and the Philippines. He has been awarded the Combat Action Badge and Bronze Star, is a Master Parachutist and graduate of the U.S. Army’s Ranger School.

Tony served as a National Security Fellow at Harvard University’s JFK School of Government, has an M.A. in International Relations from the Catholic University of America, and earned a Master of Military Art and Science from the Army’s School of Advanced Military Studies. Notably, he is listed as a distinguished member of the famed 502nd, 504th, and 505th Parachute Infantry Regiments. He is also a graduate of the Broad Superintendent’s Academy of the Eli Broad Foundation, which focuses on training leaders around the country for service as superintendents in large school districts. After a career serving his country in uniform, Tony is finding his second calling in education reform in America.