In  EXPECT A MIRACLE, Jenny reflects on her past while comparing it to the lessons her sons, Conner and Cayden, have taught her about life. The touching memoir describes Jenny’s perseverance in the wake of her mother’s death, her struggles as a teenager, her abusive relationship, and her journey into motherhood. Despite Jenny’s obstacles raising her son Cayden, who has spastic Cerebral Palsy, she takes inspiration from her sons and their decision to race together in the Nashville Kids Triathlon in 2011.

When I was a little girl I loved to hear family stories about the way our hometown, Old Hickory, Tennessee, was when my mom was my age. The house where she grew up had been the center of our life for generations. To hear the family describe it, Old Hickory was like Mayberry on the old Andy Griffith Show. On the Fourth of July all the families set up lawn chairs to watch the fireworks. The men had an annual contest to see who could make the best flavor of hand-churned ice cream. The atmosphere was so ideal that everyone called it Pleasantville. Sure, it was a company town; everybody worked for DuPont, and nobody made much money. But the way my family told it, those were its strengths.

My mother’s grandfather bought the little yellow duplex at the end of a cul-de-sac when it was new, passing it down from father to daughter to daughter ever since. My Nanny and Pop raised their children there, and when my mom’s third marriage ended, we moved in. My mom and me lived on one side of the duplex, and my grandparents lived on the other. Anytime I wanted to see Nanny or Pop, I just opened their unlocked door and walked in. They always shook their heads when they talked about how things had changed in Old Hickory—too many renters were taking over; where was the pride?—but I still saw it as Pleasantville.

I remember the comfort and security of waking up next to my mom in her white wrought-iron bed in an all-white bedroom. We slept under a pale pink floral bedspread with hints of purple and green. I like to remember it on Sundays late in the spring. I woke up to sunbeams on my face and the sound of Pop outside water- ing his garden. I knew that when we came home from church, Nanny’s kitchen would smell like tomato sauce, rich with herbs from Pop’s garden. We’d all have Sunday dinner together. And my most precious Sunday morning memory of all is of a moment before the day even started, when I nestled in that magical nook by my mother’s back, where I fit perfectly.

In some ways I thought I had it better in Old Hickory than Mom had. When she was little, Pop was working and couldn’t wait outside the school building every day to walk her home, as he did for me. While he waited, Pop would peel me an apple that he’d picked from one of the trees at the end of the cul-de-sac. As we walked back to the duplex, I munched and chattered about the day at school. My grandpa never said much. He just smiled. As soon as we rounded the corner, I looked to see if the front door on our side of the duplex was open. If it was, I could usually see the silhouette of my mom as she moved around the kitchen. I wanted to be just like her, and—just like her—I expected to spend my whole life in Old Hickory. But it didn’t turn out that way. 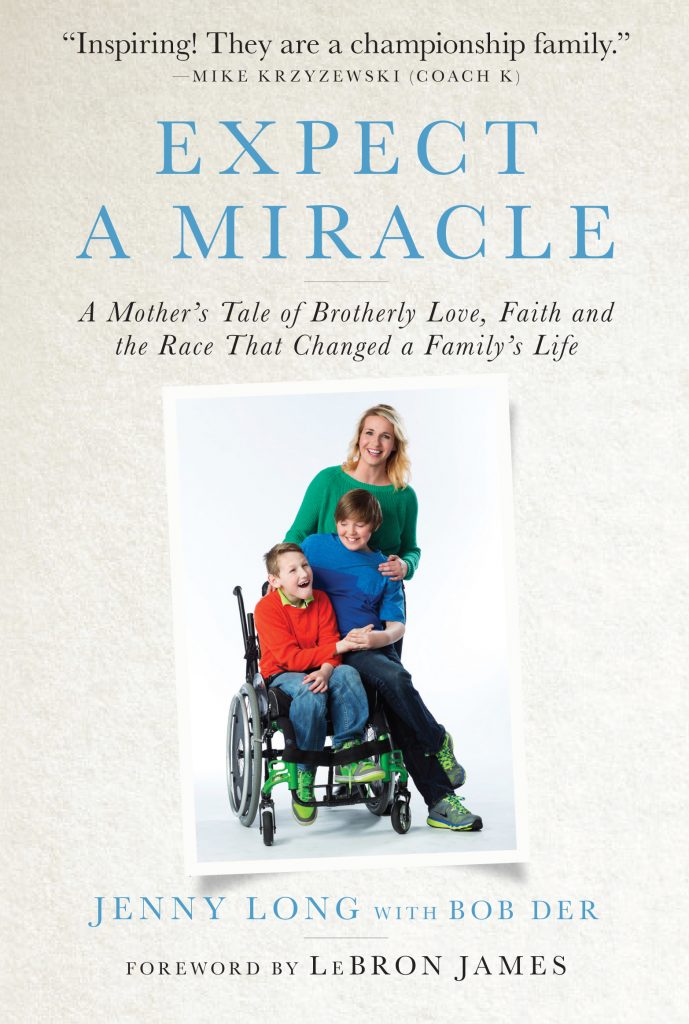 Jenny Long’s young life tipped into chaos at age 12 with the death of her mother. By 18, she was a high school dropout, pregnant, and married to a convicted felon. But with the birth of her son Conner, Jenny vowed to end the vicious cycle and make a better life for her new family.

Two years later, Jenny’s second son, Cayden, was born with spastic cerebral palsy. Undaunted by the doctor’s recommendation to place her disabled son in an assisted living facility, she made the courageous decision to raise him at home. Similarly unfazed by Cayden’s disability, older brother Conner developed a loving relationship with Cayden, engaging and respecting him with a grace and determination that belied his young age. At age 7, Conner, determined to share his love of athletics with Cayden, entered the Nashville Kids Triathlon, pushing and pulling Cayden every step of the course. The two brothers crossed the finish line together, and their thrilling and emotional race captured the hearts of millions and earned both boys Sports Illustrated Kids‘s SportsKids of the Year award.

Expect a Miracle is the inspirational story of Jenny’s life and how she raised two extraordinary boys against all odds — brothers whose love and determination affirmed Jenny’s deeply held faith that everyone, no matter their challenges, can find their miracle.

Jenny Long is the mother of Conner, 9, and Cayden Long, 7, who have competed in triathlons together as Team Long Brothers since 2011. Conner saw it as a way for him to connect with Cayden, who suffers from Spastic Cerebral Palsy, and they have competed in more than 14 triathlons, including two IronKids Triathlons. They’ve been named Sports Illustrated’s 2012 SportsKids of the Year and and were presented with the National Consortium for Academics and Sports (NCAS) Hero Among Us Award.

EXPECT A MIRACLE details Jenny’s journey through motherhood with Conner at a young age as well as her struggle raising Cayden. Along with the nation, Jenny has been inspired by her children, but also her previous struggles, and she shares those important lessons with readers. The boys and the story of their inspiring triathlon have been featured on the Ellen Degeneres Show, the Christian Broadcasting Network and Exceptional Family TV.

Watch an interview of Jenny, Conner and Cayden on Good Morning America.

Watch ESPN’s video featuring the Long family and their story.

Watch a video about the Sports Illustrated Kids award the boys won on The Huffington Post.

Y’all can expect my review of EXPECT A MIRACLE later this week. Until then, take care.

GUEST BLOG: The Mirror Inside the House by Toby Negus Plus Giveaway!