GUEST BLOG: Inside with a Cardiac Surgeon Turned Thriller Writer

We’d like to welcome Thomas Jay Berger, MD to Novels Alive! Thomas Berger has penned DUELING IN DEALTH’S BACKYARD, a medical thriller that will keep you up all night turning pages as quickly as you can read.

I like to think that I’m unique as a writer of medical thrillers.  I realize there are other doctors and medical professionals who write thrillers, but my book centers around a very specific type of doctor, a cardiac surgeon.  As a retired cardiac surgeon myself, I know the level of intense concentration, dedication and responsibility there is in this kind of field.  I wanted my character to be part of that.

Some MD writers, like Michael Chrichton, have never actually practiced medicine at all.  Others like Michael Palmer practiced for a short time in important but relatively mundane specialties.  They may be great writers, but they do not provide the insights of a surgeon dealing daily with life or death issues.  No successful fiction author has ever been a cardiac surgeon and no other cardiac surgeon has my credentials as a writer.  I won the Faulkner Award, for a short story, over 700 other entries, and the judge was C. Michael Curtis, iconic story editor for the Atlantic Monthly.

No one on this planet but me, who has intentionally stopped a heart and then dueled with death in the operating room to start it again, has both the experience and the literary skills to bring readers along on that cosmic journey.  In Dueling in Death’s Backyard, I do exactly that.  I bring you along for the ride.  A thrill inside the thriller so to speak. Thus, the name of the novel.

DUELING IN DEALTH’S BACKYARD is an intensely, fast-paced medical thriller written by retired cardiac surgeon Thomas Jay Berger, MD who is the winner of a Faulkner award for writing.

Exposing a scandal at the VA hospital was Dr. Cooper Logan’s responsibility and his first mistake.  The world was background noise as Cooper worked to save lives.  He’d won his scholarship wrestling and struggling with Death in the operating room was his new passion.  But, hospital politics wasn’t Cooper’s strong point and learning them the hard way cost him his residency.  Then, to make matters even worse, the druggy nurse Cooper had exposed, turns up dead and Cooper is framed for the murder. Now Cooper must duel with death outside the OR and this time it’s his own life that’s at stake.

And the danger he faced now had Death staring him in the face. 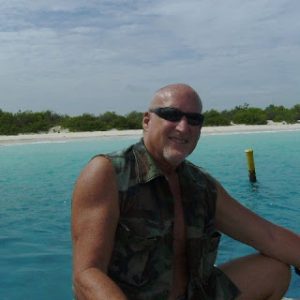 Retired from active surgical practice due to vision problems, my wife and I bought a 50 ft. sailboat and sold or gave away everything that wouldn’t fit on board.  We spent about 8 years sailing all around the Caribbean.  Three years ago we settled in Miami, where we each have moms in their nineties who need us to be close by.  Other than my medmal expert business, I box twice a week, pump iron twice a week, and try to get to the shooting range whenever I can.  If one is going to write thrillers with action scenes including fist and gunfights, one should have a clue how to actually do these things.  A famous medical thriller writer (who shall not be named) once wrote a gunfight scene where a revolver did not fire because the safety was on.  He apparently knew absolutely nothing about firearms – not even the basic fact that revolvers do not have safeties.  Fistfight scenes by meek or sedentary authors are often even worse – describing techniques that would never work in real life.  I am proud of my OR scenes, which no one but me could ever write.  But I am also proud of the of action scenes which my own knowledge experience and constant training allow me to portray realistically.