Seventeen-year-old Cera Marlowe wants a normal life; one where she and her mom can stop skipping town every time a disturbing vision strikes. But when a girl she knows is murdered by a monster she can’t explain, Cera’s world turns upside down.

Suddenly thrown into an ancient supernatural battle, Cera discovers she’s not alone in her gifting and vows to use her visions to save lives. But why does John Milton’s poem Paradise Lost keep interrupting her thoughts?

In a race against time and a war against unearthly creatures, will decoding messages embedded in the works of classic literature be enough to stop the bloodshed and protect those she loves? 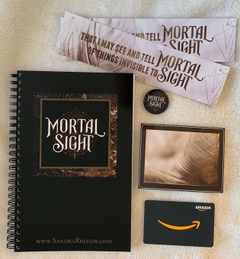 Sandra Fernandez Rhoads is an author, born in Queens, New York to Cuban-Colombian parents. She grew up in Texas with a love for classical art and literature, particularly Renaissance artists and Late Romantic poets. After attending the University of Texas at Austin, she went on to earn an MA in her seventeenth century crush, John Milton. Sandra also has a background in acting, directing, as well as previous script writing experience for stage and short film. Every story she writes is linked to classical works, whether woven through the story or a modern retelling.

Sandra has a deep love for the artist community and is an active member of Art House Dallas. She dreams of one day learning to play the theme to Jurassic Parkon her cello named Lysander. When she’s not dreaming up fantastical worlds or challenging her characters to over come impossible obstacles, she loves seeking new adventures to fuel her imagination and occasionally swings a tennis racquet without injuring herself or others.

MORTAL SIGHT is her debut novel with the sequel set to release in 2021.