GUEST BLOG: Amy Pershing on Food as Memory Plus Giveaway!

Previous article
4 STAR REVIEW: A SIDE OF MURDER by Amy Pershing
Next article
BOOK BLAST: UNDER THE EMERALD SKY by Juliane Weber Plus Giveaway!

The nineteenth-century French journalist and epicure Charles Pierre Monselet once famously wrote: “The pleasant hours of our life are all connected by a more or less tangible link with some memory of the table.” I agree with that sentiment wholeheartedly. It is at the table where we have what I consider all the necessary ingredients for happiness—family, friends, laughter, love, and, of course, good food (and drink!).

But I would go further. The memories, in my case, are not just of cheerful times eating together. They are also of lively hours in steamy kitchens with my mother, my grandmother, and my great-grandmother preparing the dishes that would become treasured family recipes.

Every summer, my family would join our vast—and extremely loud—clan on Cape Cod sailing, swimming, clamming, and, of course, eating. Steamed clams with melted butter, grilled bluefish pulled that morning from the bay by my Uncle Harry, my mother’s chicken, and dumplings, my Maw Maw’s fudge—I could go on and on.

But best of all was my grandmother’s clam chowder made with quahogs that we’d dug ourselves. To this day, that chowder is a memory brought to life—of my golden summers on the Cape and my rather stern but to me ever-fascinating grandmother, Margaret Jane.

In A Side of Murder, the first of the Cape Cod Foodie mysteries, disgraced chef Samantha Barnes remembers happier days as a child making clam chowder with her Great Aunt Ida. The recipe below is my best re-creation of Margaret Jane’s/Aunt Ida’s chowder. Enjoy! 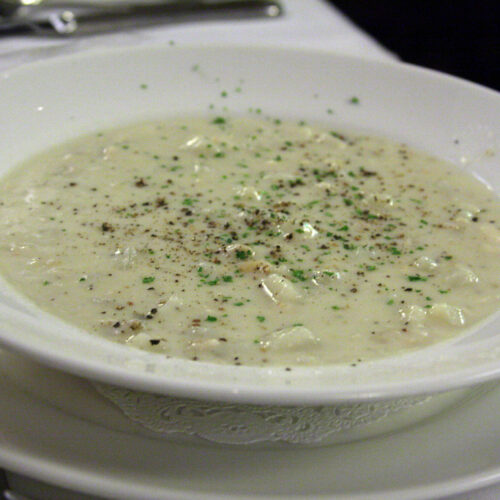 A real Cape Cod clam chowder is a thing of modest beauty.  It is not thickened or overly creamy. It is nothing more than tender clams, little crispy cubes of salt pork (or bacon), some minced onion and celery, a couple of diced potatoes – all swimming in a rich, milky, buttery broth redolent of the sea. In A Side of Murder, Sam remembers Aunt Ida and herself as a child digging their own quahogs, but any reputable fishmonger should have fresh hard-shell clams on hand. If these aren’t available to you, frozen or canned clams are a perfectly respectable substitute.
Print Recipe Pin Recipe 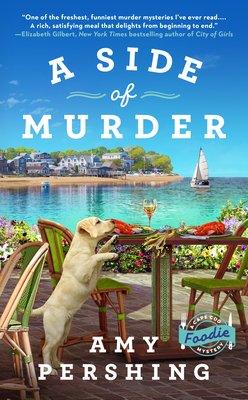 Samantha Barnes was always a foodie. And when the CIA (that’s the Culinary Institute of America) came calling, she happily traded in Cape Cod for the Big Apple. But then the rising young chef’s clash with another chef (her ex!) boils over and goes viral. So when Sam inherits a house on the Cape and lands a job writing restaurant reviews, it seems like the perfect pairing. What could go wrong? Well, as it turns out, a lot.

The dilapidated house comes with an enormous puppy. Her new boss is, well, bossy. And the town’s harbor master is none other than her first love. Nonetheless, Sam’s looking forward to reviewing the Bayview Grill—and indeed the seafood chowder is divine. But the body in the pond outside the eatery was not on the menu. Sam is certain this is murder. But as she begins to stir the pot, is she creating a recipe for her own untimely demise?

February 23 – I’m All About Books – SPOTLIGHT

February 25 – Escape With Dollycas Into A Good Book – REVIEW

February 26 – I Read What You Write – CHARACTER GUEST POST