GUEST BLOG: It’s All About Story by Toni Morgan Plus Giveaway! 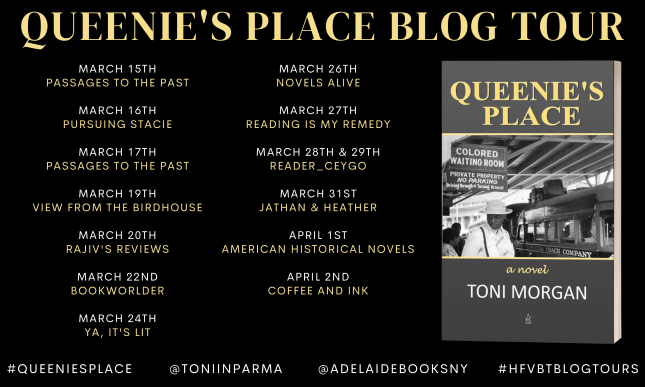 Years ago, when I was still in college, I read an essay about the creative process that laid it all out in five steps:

Over the years, as a writer and an artist, I’ve found this definition pretty accurate. 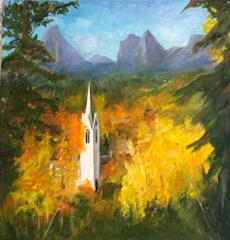 The idea can come from anywhere. My writing often starts with something someone told me or that I overheard or read: Tin Soldier, a short story incorporated in Harvest the Wind was from a snippet of conversation I had with my aunt about a trip to Mexico; Queenie’s Place from a brief outing to pick up a friend whose car had broken down in front of a brothel; Patrimony from an acquaintance telling me he didn’t know his father, only that he was French Canadian—a little research put the father at the perfect age for being involved in the Quebec separatist movement. Painting ideas often start with travel, a face, a bit of landscape, something I’d like to capture, like this church in the Austrian Alps.

The time spent on researching/gathering materials depends largely on the project. For Patrimony, I traveled to Montreal and spent two weeks in McGill University library studying the Quebec separatist movement (this was before the internet made such research possible from home) and getting to know Montreal a bit. I kept a map of the city taped above my desk next to a story arc detailing plot lines. Queenie’s Place required little research since I’d lived so much of it as a military spouse. Many of my paintings depict the places I’ve visited over the years—from Japan, where we lived for nearly four years, to Montenegro, France, Austria, etc. Like these two paintings, the first from a park in Paris, and the second closer to my home in Idaho: 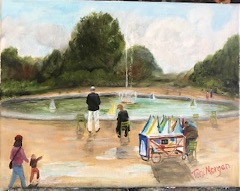 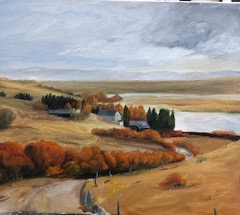 Laying it out in painting means putting down the darkest darks and the lightest lights. In writing it means the first draft, telling the story, getting in the big scenes.

Refining takes the most time and is the most important, I think. In painting it means getting the transitions right, putting in the middle colors that give body to the painting. In writing, it is editing. Over and over again. I think I must have seventeen drafts of Echoes From a Falling Bridge. Queenie’s Place started as a short story, then became a screenplay, then a novel with Billy as the narrator, and finally rewritten in Doreen’s and Queenie’s voices. It also went in my drawer for about nine years.

Finally, we add the highlights. Both in painting and in writing, the highlights need to be small, but they must also be placed with a purpose in order to stand out.

In the end, it’s truly all about story: writing is painting a story with words and painting is telling a story in color. 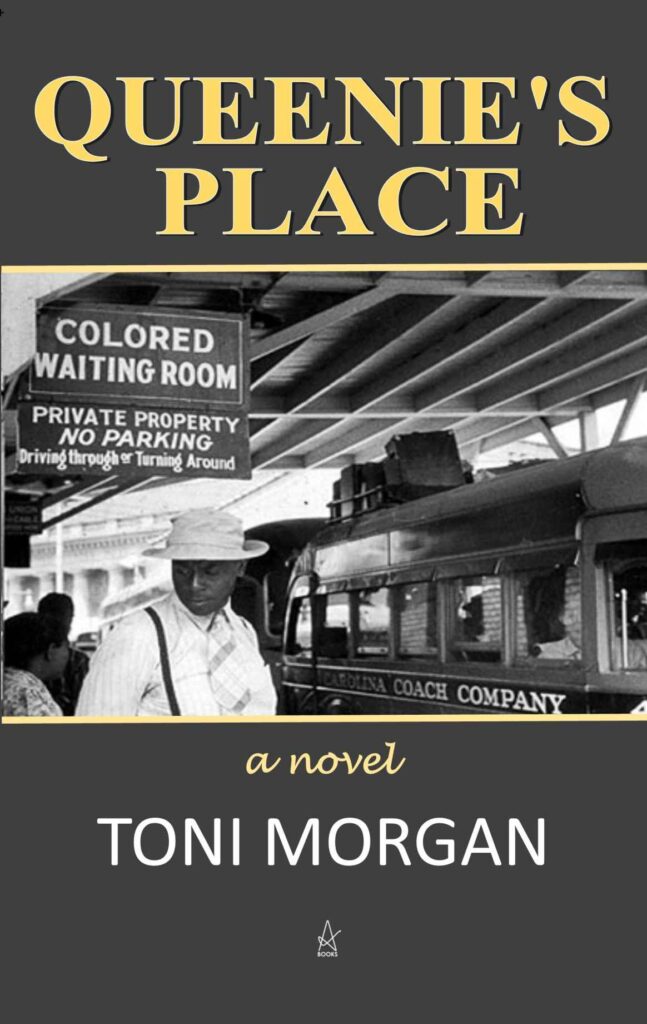 Queenie’s Place, set in rural North Carolina in the early seventies, is the story of an unusual sisterhood between a thirty-something white woman from California and a fifty-something black woman from the south. From the moment Doreen Donavan sees the “Welcome to Klan Country” sign outside Goldsboro, North Carolina is one culture shock after another. She thinks the women she meets on the military base, where she and her family now live, are the dullest, stuffiest, most stuck-up women she’s ever run across, and frankly, they don’t think much of her either. She’s hot, miserable, and bored. Then one day, BAM, her car tire goes flat, right in front of a roadhouse outside the town of Richland, near where MCB Camp Puller is located. Inside, Queenie is holding forth at the piano. The place is jumping. Besides the music, there’s dancing and the best barbecue in North Carolina. Doreen’s husband, Tom arrives and must practically peel her out of the place. Queenie doesn’t expect to see Doreen again, but Doreen comes back and their unlikely friendship begins. Without warning, Queenie’s place is closed, the women accused of prostitution and bootlegging. A born crusader (she cut her teeth demonstrating against the Vietnam War—yes, even with her husband over there), Doreen quickly dons her armor and saddles up. Things don’t go quite as planned.

The giveaway is open to the US only and ends on April 2nd. You must be 18 or older to enter. 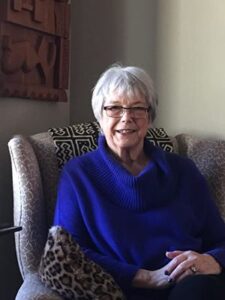 A longtime military spouse, TONI MORGAN has lived in many parts of the US and also for nearly four years in rural Japan. There she had the good fortune to work part-time in a Japanese pottery factory. That rich experience led to the first in her WWII trilogy ECHOES FROM A FALLING BRIDGE, which gives a unique view of life in rural Japan during the war. Second in the trilogy is HARVEST THE WIND, partially set in a Japanese internment camp in Idaho’s Magic Valley. The third in the series is LOTUS BLOSSOM UNFURLING, which continues the saga after the war ends. She also wrote PATRIMONY, and TWO-HEARTED CROSSING, companion books set in Montreal Quebec Canada during the Quebec Separatist Movement and 20 years later, in northern Idaho. Her novel QUEENIE’S PLACE is a 2019 National Book Award in Literature nominee. Her short stories have appeared in various literary magazines and journals, and her short story “Tin Soldier” was included in MOORING AGAINST THE TIDE, a creative fiction and poetry textbook published by Prentice Hall. Her most recent release is BETWEEN LOVE AND HATE, a collection of short stories, including Pushcart Prize nominee “The House on East Orange Street” and the aforementioned “Tin Soldier.”

Monday, March 15
Review at Passages to the Past

Wednesday, March 17
Interview at Passages to the Past

Friday, March 19
Feature at View from the Birdhouse

Saturday, March 27
Review at Reading is My Remedy