“[A] pitch-perfect murder mystery… If The Crown were crossed with Miss Marple…, the result would probably be something like this charming whodunnit.” – Ruth Ware, author of One by One

The first book in a highly original and delightfully clever crime series in which Queen Elizabeth II secretly solves crimes while carrying out her royal duties.

It is the early spring of 2016 and Queen Elizabeth is at Windsor Castle in advance of her 90th birthday celebrations. But the preparations are interrupted when a guest is found dead in one of the Castle bedrooms. The scene suggests the young Russian pianist strangled himself, but a badly tied knot leads MI5 to suspect foul play was involved. The Queen leaves the investigation to the professionals—until their suspicions point them in the wrong direction.

Unhappy at the mishandling of the case and concerned for her staff’s morale, the monarch decides to discreetly take matters into her own hands. With help from her Assistant Private Secretary, Rozie Oshodi, a British Nigerian and recent officer in the Royal Horse Artillery, the Queen secretly begins making inquiries. As she carries out her royal duties with her usual aplomb, no one in the Royal Household, the government, or the public knows that the resolute Elizabeth will use her keen eye, quick mind, and steady nerve to bring a murderer to justice.

SJ Bennett captures Queen Elizabeth’s voice with skill, nuance, wit, and genuine charm in this imaginative and engaging mystery that portrays Her Majesty as she’s rarely seen: kind yet worldly, decisive, shrewd, and most importantly a great judge of character.

I admit, I totally picked up this book to review because Queen Elizabeth II is the sleuth and I was really curious as to how that was going to play out. What I got was an interesting look at royal life along with a murder mystery.

Ms. Bennett draws from many real-life characters and events for her story. The book is set around the time of the Queen’s 90th birthday and all her family and many other famous folks either make an appearance or are mentioned. It’s rather kind of odd to be a fly on the wall as the Queen entertains the Obamas. I did find it rather interesting to get a peek of the behind-the-scenes, everyday goings-on in royal life… at least Ms. Bennett’s version. I’m not entirely sure how accurate it is, but it was interesting.

There were a ton of characters introduced, from her assistant Rozie, to the head of MI5, to all the various staff and those involved with the mystery. I think many of the characters will be recurring in the series, like Rozie. But it was a touch overwhelming as I had to keep stopping and trying to remember how a person fits into the story.

The mystery itself was all over the place. I mean, Ms. Bennett threw so many curve balls in there, I felt like I was getting whiplash. And when I read that Queen Elizabeth was the sleuth, I was confused when she was more like a chess player moving the pieces around the chessboard having others do the work for her… but I suppose that’s how it would have to be since the Queen really can’t go slumming around snooping all over London. So in that way, it was rather clever. Just totally not what I was expecting.

The Windsor Knot isn’t a bad novel, but I think it suffers from the first in a new series syndrome of needing to do a lot of character introductions and world-building to the point that it’s a bit overwhelming. But the characters and interesting and the mystery was pretty solid. If you’d like a different sort of mystery set in the world of the British royals, this might be the series for you. 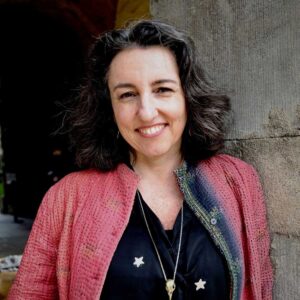 SJ Bennett gained her PhD in Italian Literature from the University of Cambridge and was a strategy consultant at McKinsey & Co before becoming a professional writer. She has published ten books for teenagers, winning the Times/Chicken House Competition for Threads in 2009 and the Romantic Novel of the Year award for Love Song in 2017.