BOOK BLAST: THE BAREKNUCKLE GROOM by Holly Bush Plus Giveaway!

Previous article5 STAR REVIEW: THE LUCK OF THE BRIDE by Janna MacGregor
Next articleINTERVIEW: Barbara Monajem on LADY ROSAMUND AND THE HORNED GOD Plus Giveaway! 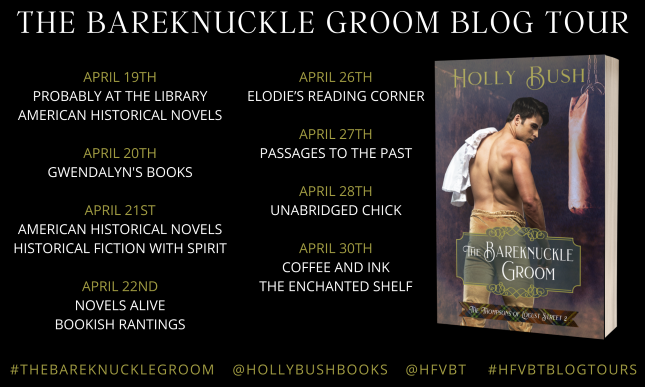 1869 Bareknuckle champion, James Thompson, is confident his future continues with beautiful women and victories in the boxing ring. Men admire his skills, power, and quick fists, and are more than willing to bet their hard-earned coins on his name. Women admire his handsome face, his undaunted confidence, and his powerful body. Nothing will change his successfully plotted course, until…

Lucinda Vermeal arrives on the Philadelphia social scene when her father moves them to the city in the hopes that his only daughter will find a suitable partner. After all, her husband will be intimately involved with Vermeal Industries whose business interests and political connections touch France, England and all of the United States. Lucinda’s pale statuesque beauty attracts the finest of Philadelphia’s young men, but her cool and reserved attitude keep them at arm’s length. Until she meets a man willing to challenge her at every turn. Will James Thompson expose Lucinda’s passionate nature like no other man ever could?

The giveaway is open to the US only and ends on April 30th. You must be 18 or older to enter. 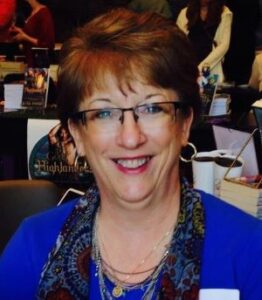 Holly Bush’s historical romances are set during the turbulent and transformative years of the late 1800s. The first two books in her newest series, The Gentrys of Paradise, released in the spring of 2017 and began with the novella Into the Evermore where readers meet Virginia horse breeders, Eleanor and Beauregard Gentry. The following books feature their children, Adam, Matthew, and Olivia. For the Brave is Matthew’s story and is the first full-length book of the series. Olivia’s book, For This Moment, released in the spring of 2018. The final book, For Her Honor, is now available.

Holly makes her home with her husband, one happy Labrador Retriever and a clever Jack Russell rescued from the pound, and two difficult cats in Lancaster County, Pennsylvania.

Monday, April 19
Review at Probably at the Library
Review at American Historical Novels

Tuesday, April 27
Excerpt at Passages to the Past

Friday, April 30
Excerpt at Coffee and Ink
Review at The Enchanted Shelf