GUEST BLOG: About THE CORONATION by Justin Newland Plus Giveaway!

The Coronation is my third novel. Like the other two, The Genes of Isis and The Old Dragon’s Head, it’s a historical fantasy. They are stand-alone novels, although they share similar themes – the individual’s spiritual quest, the journey of self-discovery and the role of destiny in human affairs. My stories feature known events and real people from history which are re-told and examined through the lens of the supernatural—that’s ‘history with a supernatural twist’.

The Coronation takes place during the Great Enlightenment, that era of intellectual ferment in 18th Century Europe. The novel is set in East Prussia, a now-defunct state on the Baltic Sea. Historically, Prussia was the template for an embryonic Germany. At the time of the novel, in the 1760’s, Prussia was governed by an enlightened despot, King Frederick the Great. 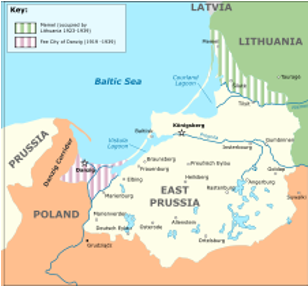 Sandwiched between Poland and Lithuania, the land of East Prussia is special because of the presence of amber – a semi-precious yellow fossilized tree resin—along its Samland Peninsula, where 95% of the world’s amber is found.

I’ve walked along that coast, and it’s quite magical to stoop and find a morsel of amber nestling on the sea shore. That’s why, in the novel, I featured the famous Amber Room, which was housed in Catherine Palace near St. Petersburg, Russia.

Like my other novels, the plot of The Coronation unfolds against a backdrop of social and political upheaval, notably the Seven Years’ War in mainland Europe between the burgeoning power of Prussia, and its more powerful Imperial neighbours, Austria and Russia.

As well as territorial acquisition, the war was also a continuation of the religious conflicts that had afflicted Western Europe since the Great Reformation. Prussia was Lutheran (Protestant) while Austria and Russia were Catholic. 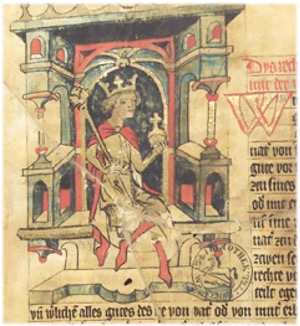 In The Coronation, I wanted to explore the origins of our modern world and its social freedoms and constraints. In the 18th Century, Prussian society, like the other societies of German kingdoms, was ordered according to the Medieval Law Book, the Sachsenspiegel (meaning the Saxon Mirror).

Its idea, similar to that of the Great Chain of Being, was that society had to be structured according to the way the Creator had ordered the universe, in other words, its mirror image. The King occupied the first station, Ecclesiastic Princes the second, and so on down to the peasants in the seventh station. Wherever you were in the structure, you were not permitted to move from it.

During the Great Enlightenment, the previously-rigid shackles imposed by the Catholic Church were slowly being loosened, allowing the development of original philosophical and political ideas and the exploration of new scientific fields such as biology. Many of the seeds of our modern times were sown during the Great Enlightenment. The 1760’s was a time when giants such as Jean-Jacques Rousseau, Voltaire, Adam Smith, Carl Linnaeus, Immanuel Kant, and James Watt bestrode the world.

Today we live in large urban conurbations with mass movements of people. 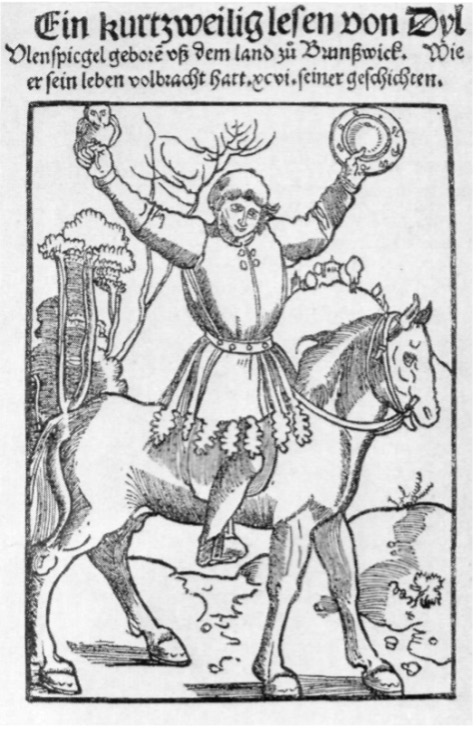 The 18th Century saw the shift from the agrarian-based feudal society built around peasant workers and landowners (or Junkers as they were called in Prussia) to an industrial factory-based one with huge anonymous cities. In those days, village people still retained a strong binding relationship with the land on which they lived, expressed through folk customs, song, dance, story and the like.

They conceived folk such as Til Eulenspiegel, a German peasant trickster, a character I explored in the novel (that’s him in the picture). There was a love affair between the people and the land on which they lived—this was Arcadia. In Europe, this was the last time when this pastoral vision of harmony with nature was prevalent. 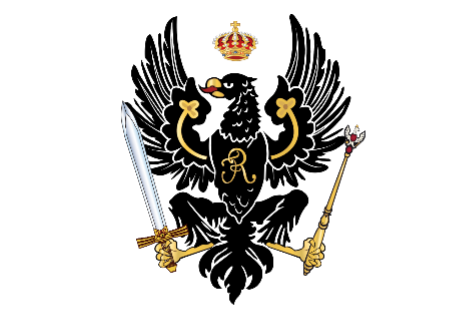 Using the folklore and heraldry of the land of Prussia, which is rich in the motif of the eagle, I conceived the idea of a supernatural entity, the Adler, and the part it would play in the development of the single most important event in modern times—the Industrial Revolution.

As well as telling the story of this exciting, changing time, I wanted to provide an alternative genesis for the Industrial Revolution, and suggest why we live in a world so reliant on technology.

Welcome to the world of The Coronation. 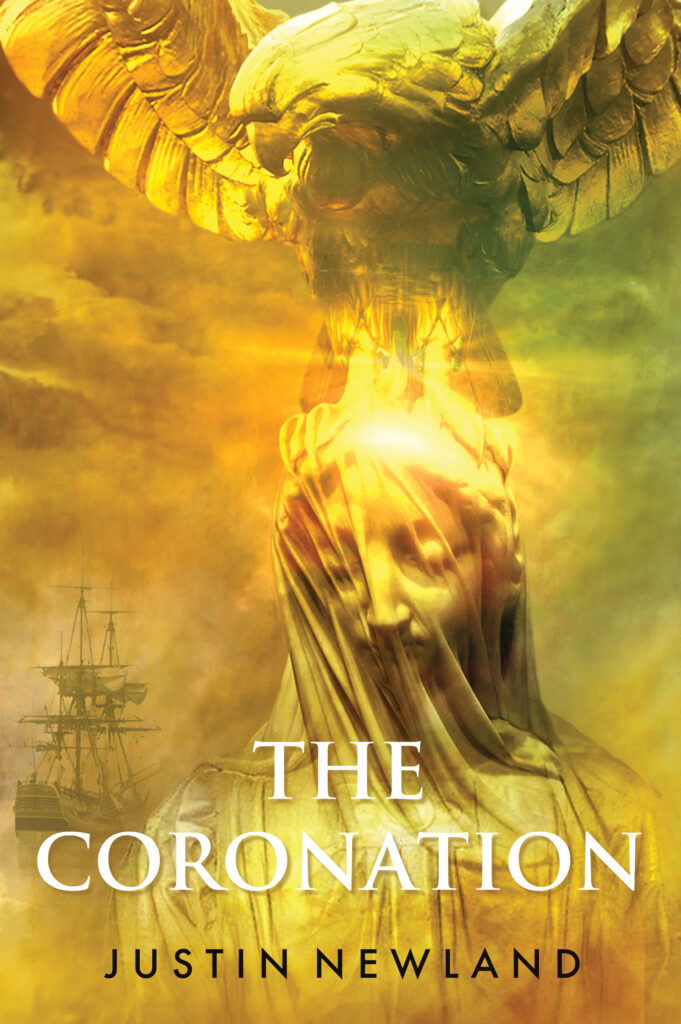 It is 1761. Prussia is at war with Russia and Austria. As the Russian army occupies East Prussia, King Frederick the Great and his men fight hard to win back their homeland.

In Ludwigshain, a Junker estate in East Prussia, Countess Marion von Adler celebrates an exceptional harvest. But this is soon requisitioned by Russian troops. When Marion tries to stop them, a Russian Captain strikes her. His Lieutenant, Ian Fermor, defends Marion’s honour, but is stabbed for his insubordination. Abandoned by the Russians, Fermor becomes a divisive figure on the estate.

Close to death, Fermor dreams of the Adler, a numinous eagle entity, whose territory extends across the lands of Northern Europe and which is mysteriously connected to the Enlightenment. What happens next will change the course of human history…

“The author is an excellent storyteller.” – British Fantasy Society 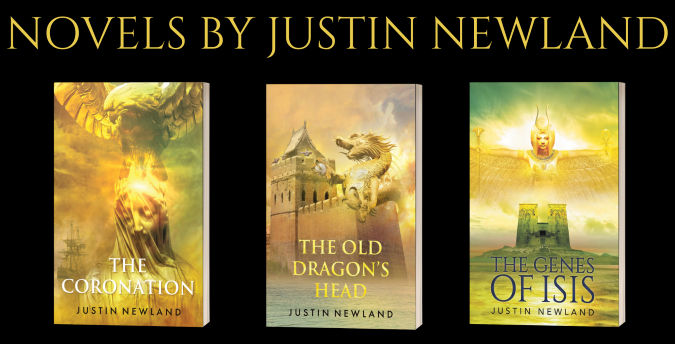 Enter to win a paperback copy of The Coronation! Two paperbacks are up for grabs.

The giveaway is open to the US only and ends on May 31st. You must be 18 or older to enter. 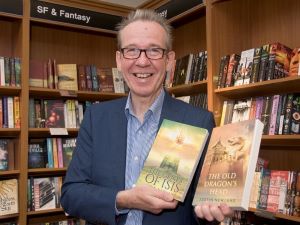 Justin Newland was born in Essex, England, three days before the end of 1953.

His love of literature began with swashbuckling sea stories, pirates and tales of adventure. Undeterred by the award of a Doctorate in Mathematics from Imperial College, London, he worked in I.T. and later ran a hotel.

His taste in literature is eclectic: from literary fiction and fantasy, to science fiction, with a special mention for the magical realists and the existentialists. Along the way, he was wooed by the muses of history, both ancient and modern, and then got happily lost in the labyrinths of mythology, religion and philosophy. Justin writes secret histories in which real events and historical personages are guided and motivated by numinous and supernatural forces.

His debut novel, The Genes of Isis, is a tale of love, destruction, and ephemeral power set under the skies of Ancient Egypt, and which tells the secret history of the human race, Homo Sapiens Sapiens.

His second is The Old Dragon’s Head, a historical fantasy and supernatural thriller set during the Ming Dynasty and played out in the shadows the Great Wall of China. It explores the secret history of the influences that shaped the beginnings of modern times.

Set during the Enlightenment, his third novel, The Coronation reveals the secret history of perhaps the single most important event of the modern world—The Industrial Revolution.

He lives with his partner in plain sight of the Mendip Hills in Somerset, England.

Monday, May 3
Review at Passages to the Past

Wednesday, May 5
Excerpt at Books, Ramblings, and Tea

Friday, May 7
Review at Bookworlder

Tuesday, May 11
Excerpt at Coffee and Ink

Friday, May 14
Review at Nurse Bookie

Monday, May 17
Review at Libri Draconis

Tuesday, May 25
Interview at Passages to the Past

Monday, May 31
Review at The Enchanted Shelf