Running a dating agency can be a killer…

Shelley Linley is sick of sickos. Yet another prankster has applied to her dating agency. This one says he’s a vampire and he wants Shelley to help him find a wife.

Meeting him for a second interview against all her better judgement, Shelley discovers that he has no clue about women. A shame because he’s super-hot, amusing, and has a lot of single friends he could recommend her struggling business to, even if he does say they’re werewolves and demons. She has to help him, even if he’s crazy.

If she can ignore his delusions, she’s sure she can help him meet someone. But when death threats start arriving on her doorstep, Shelley’s not sure she’s cut out for the job… then her dating algorithm states she’s his ideal partner. Now she’s not sure if she should take the risk for love, or run like hell.

The Vampire Wants a Wife by Andie M. Long didn’t really work for me. It was okay, but it just wasn’t to my taste. Add in a poorly edited narration, and it just didn’t get any better.

The Vampire Wants a Wife is a rather interesting premise that there’s a secret world of paranormals who want a matchmater. Theo, a vampire, goes to Shelley, a human matchmater, determined to find a life partner. Shelley thinks Theo is insane as she has no idea of the paranormal world she lives in. Once Shelley is convinced, Theo recommends his friends, which sets up the rest of the series.

This first book actually pairs up Shelley and Theo as well and introduces this paranormal world and all its players. There’s a lot packed into a sub-4-hour audiobook. Ms. Long attempts to make this humorous, but it’s not really to my taste. There are moments where I smiled, but there was no laughing out loud. It just seemed so extreme.

Now to the narration. I was totally underwhelmed. More often than not, I was distracted by the quality of the recording. There was the occasional background noise, like someone talking just outside the recording area, and sometimes a buzz (like a fan or air conditioner) in the background. Often there was a slight echo like she was in an empty room with no soundproofing. The actual performance was okay. Ms. Doll attempted accents and different voices for the various characters, but it wasn’t entirely successful. Her pacing is fine, and she does try to emote during the reading, which is sometimes successful and sometimes not so much. I did find that I needed longer breaks between scenes/chapters, especially when the point of view changed.

I can’t say that I’d recommend this book as it really just wasn’t to my taste. I won’t be continuing the series. However, if you like humorous paranormals, this might be up your alley. 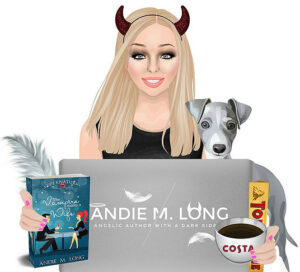 After twenty+ years of thinking about it, at the age of forty, I decided it was time to finally WRITE THE BOOK or forget about it. I studied two Open University Courses in Creative Writing and finally wrote my first novel. I’ve now written oodles of books and also write psychological suspense as ANDREA M. LONG and contemporary romance as ANGEL DEVLIN.

I live in Sheffield with my long-suffering partner, my teenage son, and our beautiful fur-baby, Bella. When not being partner, mother, or writer, I can usually be found on Facebook or TikTok.

I can't say that I'd recommend this book as it really just wasn't to my taste. I won't be continuing the series. However, if you like humorous paranormals, this might be up your alley.Jen K2 STAR AUDIO REVIEW: THE VAMPIRE WANTS A WIFE by Andie M. Long