GUEST BLOG: Watching the Watcher: What Makes a Series? by Helen Carrie Foster Plus Giveaway!

I feel sure you already swear by at least one favorite mystery series. Me too. I’ve been analyzing what attracts me, besides, of course, a likable protagonist facing a crafty opponent: a magnetic setting, and a set of characters I can learn to love—or hate.

First, a confession: I love Brunetti. Not romantically—I respect his deep fidelity to his wife Paola, an expert Italian cook—but because it’s such pleasure being invited into his head as he appreciates Venice’s beauty and navigates the internal politics of the Questura (police department) while solving the latest murder.

We see everything from his point of view. That has dual meaning for Brunetti because his observations are strongly visual. Barely computer literate, he can’t function without the astounding internet skill of Signorina Elettra Zorzi, secretary to his adversarial boss, Vice-Questore Patta. Neither we nor Brunetti questions the legality of how Elettra gets her hands on so much information. Brunetti thinks of her as “quick-witted, radiant—the other adjectives that presented themselves all suggested light and visibility.” Leon amplifies the mystery of her improbable presence in the dingy police headquarters by including Brunetti’s frequent observations of Elettra’s elegant outfits. His visual observations also remind us that he’s a Venetian through and through, thus susceptible to and respectful of beauty:

Behind her desk, looking as though she was there only to meet the photographers from Vogue, sat Signorina Elettra Zorzi, today arrayed, as were the lilies of the field, in a white crepe de chine dress that fell in diagonal, but decidedly provocative, folds across her bosom. (Death and Judgment)

On the dark side, we also get to know Brunetti’s adversaries at the Questura through his visual observations of two Palermo natives, Vice-Questore Patta and Lieutenant Scarpa. Here’s the “universally despised” Scarpa:

Scarpa propelled himself away from the door jamb with a quick shove of his left shoulder. One instant he’d been lounging casually; the next he was upright and much taller. The speed with which he uncoiled his easy, limp posturing reminded Brunetti of snakes he’d seen in television documentaries: leave them alone and they lie coiled, still as death; make a sound and they become a whiplash unbraiding in the sun, multiplying the range within which they can strike.

We get it. Through Brunetti’s eyes we understand Scarpa’s poisonous duplicity. We also feel the danger Brunetti senses from his boss, Patta, when Patta wants Brunetti to investigate a leak from the Questura that apparently reflects badly on Patta:

Uncertain how to respond…Brunetti returned his glance to his superior’s jacket and the hand-stitched buttonholes. Beauty was where you found it, and it was always comforting to see.

When the suspicious Patta demands what Brunetti’s looking at, Brunetti responds honestly that he’s admiring the buttonholes. But Patta’s suspicion reminds Brunetti that “the old, adversarial order had been restored” between them.

Leon uses Brunetti’s point of view to enrich her characters, both friends and enemies, creating one of the most satisfying cast of characters (to my mind) in police procedurals. Brunetti’s idiosyncratic observation of visual detail provides a sense of immediacy. We practically breathe the atmosphere of the Questura and its inhabitants. Brunetti’s susceptibility to the beauty of Venice makes the setting come alive for us. As we follow him through Venice, Leon lets us hear his thoughts, wonder what he’s wondering, see what he’s seeing. We’re with him when he thinks his way to the solution and unmasks the murderer. Indeed, we’ve been with him all the way.

Second, I’m a fan of Elly Griffiths’ Ruth Galloway series. Ruth, an expert in old bones, teaches anthropology at the University of North Norfolk on the North Sea coast. The series includes vivid supporting characters—and some antagonists. Ruth’s in love with a married man, DCI Harry Nelson. She’s borne his child. What the heck will become of this relationship? Her friends include Cathbad, who dresses like a Druid and may indeed be psychic. Her sometime antagonists include the chair of her department, who hogs publicity when it’s actually Ruth analyzing the bones. Griffiths uses a third-person limited omniscient point of view: occasionally she puts us in DCI Nelson’s head or shows events through other characters’ eyes, but mainly we stick close to the protagonist, Ruth.

Ruth constantly wrestles with conflicting demands: the tug of motherhood, her academic fascination with old bones, and her fraught relationship with Nelson. She lives outside town on a wild section of North Sea coast and inland marshes. The setting, with its odd mix of British town and gown and the dangerous isolated stretch of coast Ruth loves, creates a rich environment for mystery. Seeing mainly through Ruth’s eyes we understand the analytical nature of her thought processes, and the isolation in which she operates. I can’t wait for the next volume.

Seeing through Alice’s eyes gives us her analysis of her clients’ legal dilemmas as well as her emotional reactions to the quirky characters, physical beauty, and dangers of hill country life. Her dogged pursuit of client goals triggers battles with opposing counsel and sometimes dangerous family members. Ghost Cave finds Alice clinging to a cliff, facing a killer; Ghost Letter finds Alice and her client dodging a helicopter-borne sniper; Ghost Cat pits Alice against a murderous narcissist. Book 7, Ghost Daughter, serves up new dangers in Coffee Creek, Austin, and Santa Fe. But no spoilers here!

The rugged hill country captured my heart at first sight. I hope it captures yours and you’ll join Alice in untangling suspenseful mysteries, with breaks for dancing at the Beer Barn, trying Shade Tree barbecue, and feeding the burros their afternoon carrots. 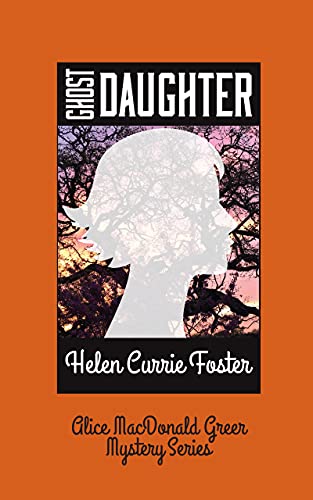 When Ellie is found dead at her ranch, her skull cracked—and a horse in the house—police can’t find a murder weapon and the obvious suspects all have alibis.

Determined to carry out Ellie’s final wishes, Alice races to find the hidden art, eluding intruders and carjackers. But who are the thieves trying to beat her to the hidden art? Is the art a treasure or a clever forgery? Is Ellie’s death connected to the murderous attacks on a lover from long ago?

The search sends Alice and her companions road-racing up Santa Fe mountains, fending off attackers in Austin, and escaping across the Texas Hill Country…rewarded occasionally with some delicious barbecue. 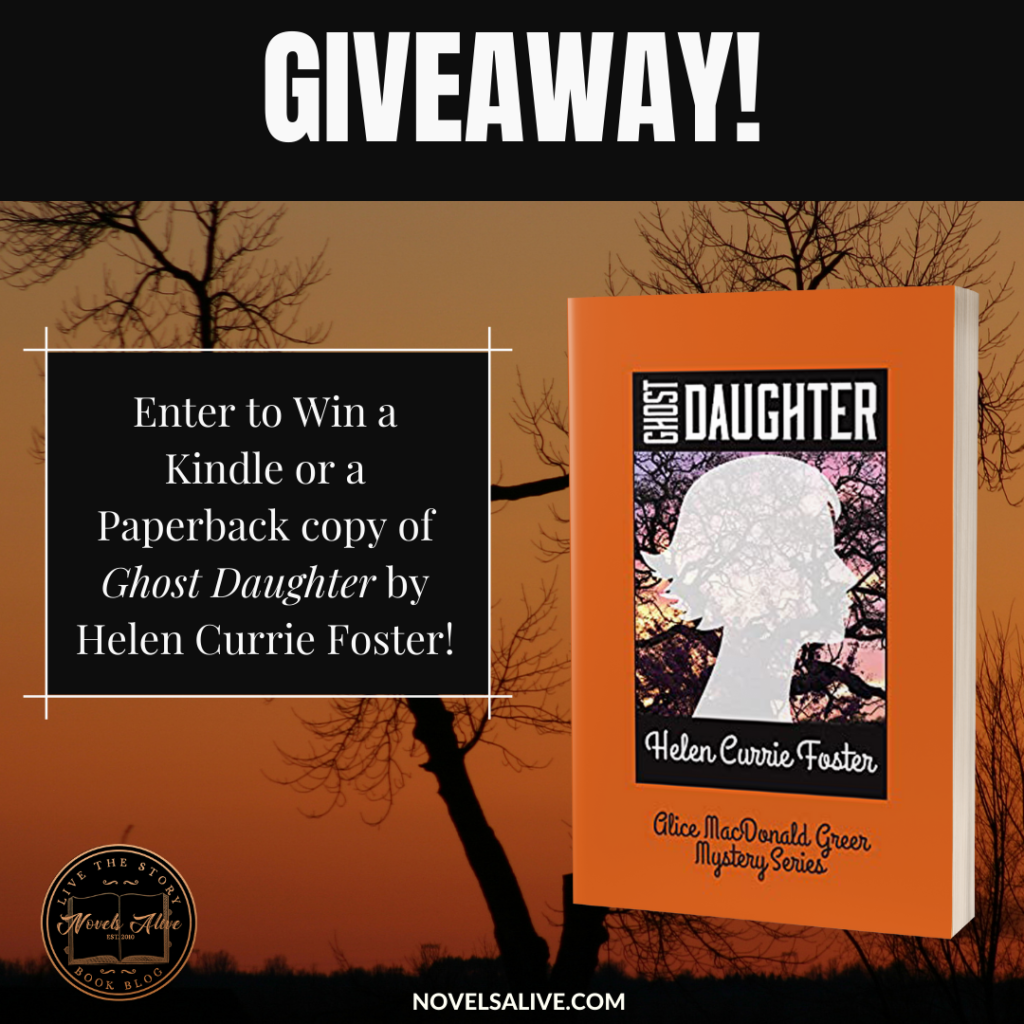 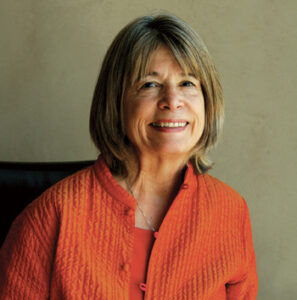 Helen Currie Foster lives and writes north of Dripping Springs, Texas, in Texas Hill Country, supervised by three burros. She’s deeply curious, more every day, about human history and prehistory and how, uninvited, the past keeps crashing the party. In each of her Ghost mystery novels, small-town lawyer Alice Macdonald Greer must unravel a murder with its roots in the past…long ago.

Foster earned her BA from Wellesley College, MA from the University of Texas, and JD from the University of Michigan where she grew fascinated with dirt and water law. After practicing environmental law and regulatory litigation for thirty years, she found the character Alice had suddenly appeared in her life. She’s active with Austin Shakespeare and Heart of Texas Sisters in Crime.

August 9 – Reading Is My SuperPower – REVIEW

August 14 – Escape With Dollycas Into A Good Book – AUTHOR INTERVIEW