GUEST BLOG: A PANTSER’S GUIDE TO NOVEL WRITING by T.A. Willberg Plus Giveaway!

Previous articleBOOK BLAST: TALK OF TOKYO by Heather Hallman Plus Giveaway!
Next articleGUEST BLOG: Write What You Know: What Happened When I Took That Advice To Heart by Joanna Elm Plus Giveaway!

In 2020, by some miracle, my first novel MARION LANE AND THE MIDNIGHT MURDER, a historical mystery set in the tunnels beneath 1950s London, was published in the U.S.A and U.K.. I’m still mildly in shock as to how this happened, considering it was my first attempt at creative writing, and am vaguely concerned that perhaps I’m living through some sort of vivid hallucination. But since publication, one of the questions I’ve been asked almost more than anything else is how I came up with the idea for the story, how I built the intricate world of Miss Brickett’s Investigations and Inquiries and how I plotted out the twisty tale from start to finish. I used to find this question tricky to answer, mostly because my writing process is (and has always been) so disorganized and, quite frankly, I seldom knew what I was doing or why. But now, with three novels in the MARION LANE series under my belt and a couple of years to mull it all over, I think I’ve finally come to understand my drafting process. It has also become apparent to me that writing this way may be the reason I’ve never suffered a period writer’s block, or lost my enthusiasm for the craft.

Thus, I’d like to share my method, with the hope that it might provide a sprig of inspiration or insight for anyone who needs it. A caveat before I start, however: there are no steadfast rules in creative writing and everyone’s process should be unique to them. So, take what is helpful here, and discard the rest.

The very first thing I do when starting out a new book is imagine the setting in which the story will take place. Will it be unfolding in Paris in the 40s, New York City in the 20s, on a ship lost at sea, on a train speeding through the countryside, at a creepy cabin in the woods? To me, setting is everything. Not only does it stir my creative juices and motivate me to actually sit down and write (and thereby escape the real world), but it also gives me a strong sense of the story’s tone and atmosphere, from which I’m able to feel out the boundaries of the plot and characters.

In the MARION LANE series, the dim and dark underground labyrinth of tunnels and chambers which form the detective agency — Miss Brickett’s Investigations and Inquiries — was the first part of the story that popped into my head. It was such a thrilling concept for me, that imagining the characters and gadgets that would inhabit this subterranean warren (and the mysteries and murders that would unfold within its walls) was a breeze. Even now, after writing the third and final book in the series, my mind is constantly filled with new ideas for characters and side plots and gadgets, all sparked whenever I picture the world I created beneath London’s streets.

Once the setting is vivid in my mind, I get to work moulding the plot and characters who will bring the world to life. But as a stalwart pantser, I don’t do this by drawing up a story structure or plot outline, I just start typing. I realise that might sound reckless, but it really is one of my favourite parts of the process. It feels so exciting to start a story with no idea what might happen next, or what characters I’ll meet along the way. Generally, I’ll kick off writing about a page or two non-stop, without thinking or worrying one bit about spelling and grammar. I suppose you might think of it as a warm-up of sorts, a way in which I stretch my writing muscle in preparation for the many months of (sometimes tedious) drafting and re-drafting that lie ahead.

By the time I’ve completed my first full-length draft, I’ve usually got a better “feel” for the plot, and sit down to draw up a very basic three-act structure. I start with an inciting incident (almost always my favourite part to write): the point at which the protagonist encounters the first obstacle set by the antagonist. Next, I move onto the midpoint: or point of no return, where the protagonist finally sees things for what they really are and is forced to engage with the antagonist and/or their cronies for the first time. Then comes the climax: the explosive, fast-paced, high drama showdown between the protagonist and antagonist. And, finally, the resolution: the wrapping up of all loose ends and the mending of broken hearts and dreams (if possible!).

From here the process is all blood, sweat, tears and blinkered determination.

I write in chronological order, one chapter at a time, for as long as I can. But if a particular scene doesn’t come to me naturally, I force myself to leave it aside and come back to it later (thereby ensuring I don’t get hung up on the same chapter/plot point for weeks on end). Thus, as you might imagine, my first drafts are short (usually around the 40K word mark) and utterly nonsensical. But that’s fine. I’ve got a vague story down on paper which can be edited and fleshed out later.

If feasible, I take a small break at this point, usually about a week or two (although a month would be ideal). Not only do I use this time to take a breath, but to draw back from the story and assess the contrast between what it is and what I want it to be. I do a lot of thinking and second-guessing at this stage, and occasionally jot down new ideas for character arcs and plot twists.

After this breather, I dive into my second, third, and fourth drafts, which are much the same as the first only a little more in-depth and polished each time. It takes me about 9 months to build a manuscript, or at least one that I’d be happy to send off to my editor for further polishing. I suppose it’s impossible to say if I could write better books if I adopted a more organised approach, but one thing I know for certain is that my methods have ensured I always approach my work with enthusiasm and joy. And as far as I’m concerned, if you’re going to be an author for life, there’s nothing more important than that. 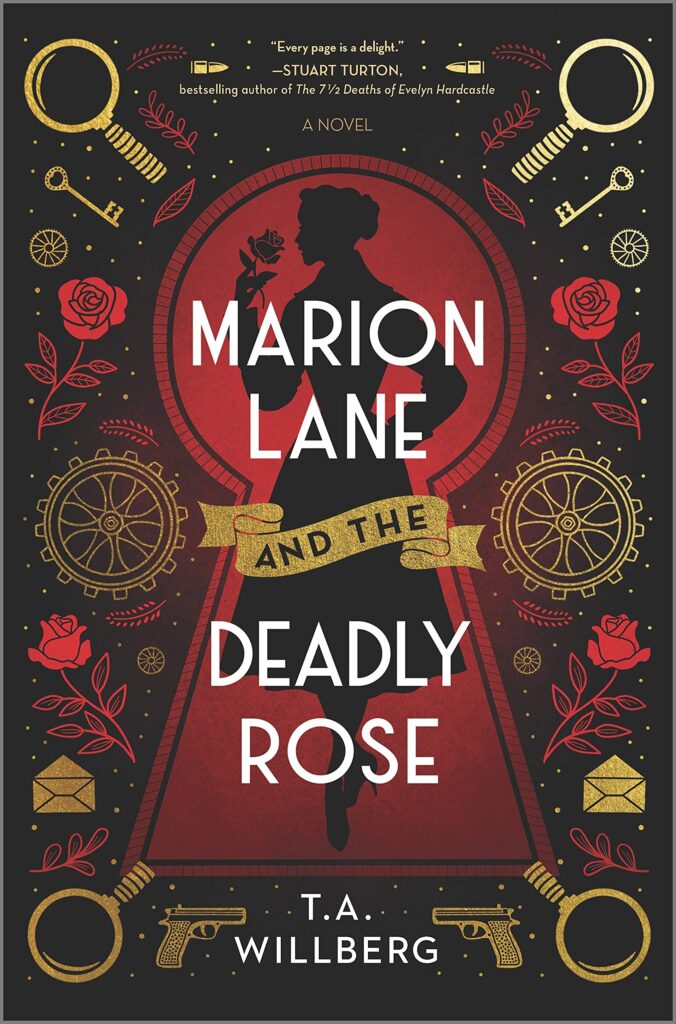 The envelope was tied with three delicate silk ribbons: “One of the new recruits is not to be trusted…”

It’s 1959 and a new killer haunts the streets of London, having baffled Scotland Yard. The newspapers call him The Florist because of the rose he brands on his victims. The police have turned yet again to the Inquirers at Miss Brickett’s for assistance, and second-year Marion Lane is assigned the case.

But she’s already dealing with a mystery of her own, having received an unsigned letter warning her that one of the three new recruits should not be trusted. She dismisses the letter at first, focusing on The Florist case, but her informer seems to be one step ahead, predicting what will happen before it does. But when a fellow second-year Inquirer is murdered, Marion takes matters into her own hands and must come face-to-face with her informer—who predicted the murder—to find out everything they know. Until then, no one at Miss Brickett’s is safe and everyone is a suspect.

With brilliant twists and endless suspense, all set within the dazzling walls and hidden passageways of Miss Brickett’s, Marion Lane and the Deadly Rose is a deliciously fun new historical mystery you won’t be able to put down. 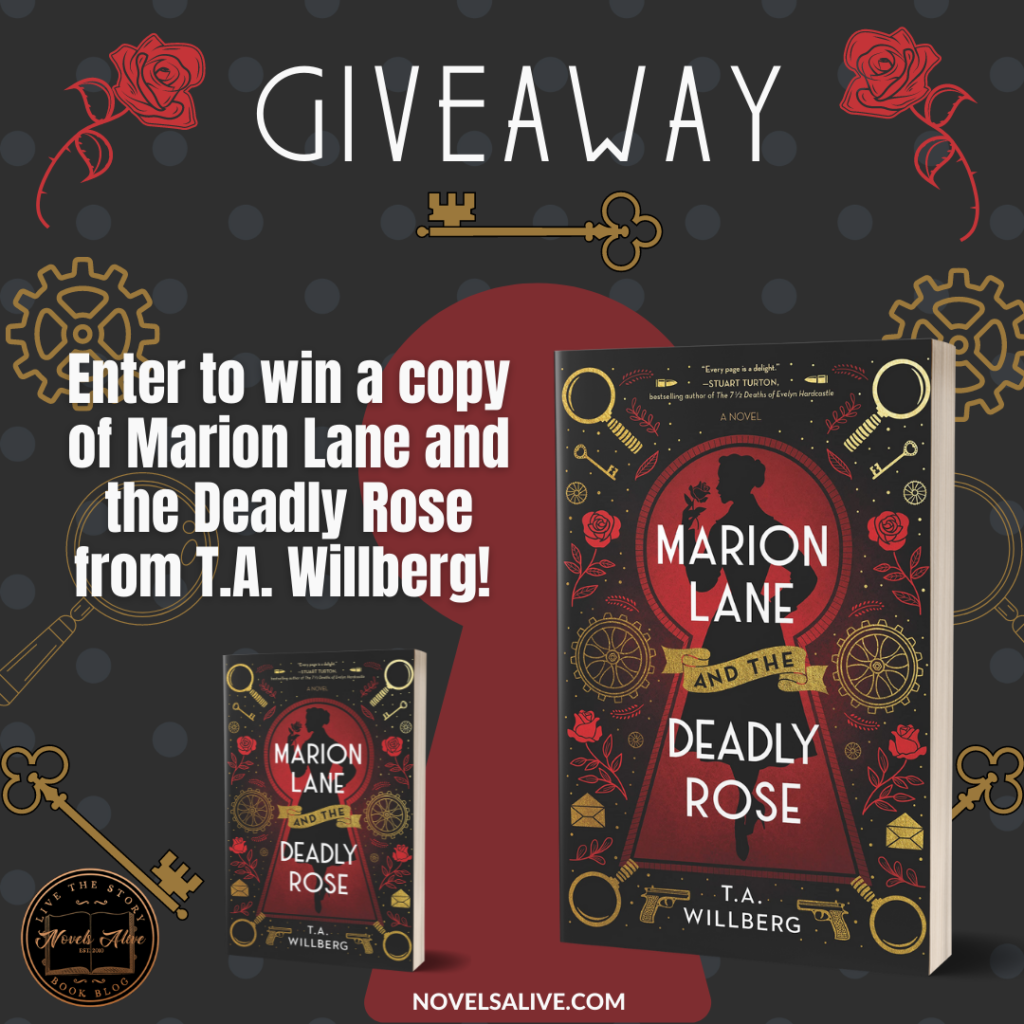 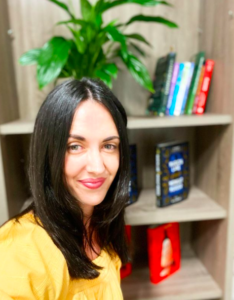 T.A. Willberg was born in Johannesburg, South Africa, and holds a chiropractic masters degree from Durban University of Technology. MARION LANE AND THE MIDNIGHT MURDER is her debut novel and launch of her detective series. She currently lives in Malta with her partner.