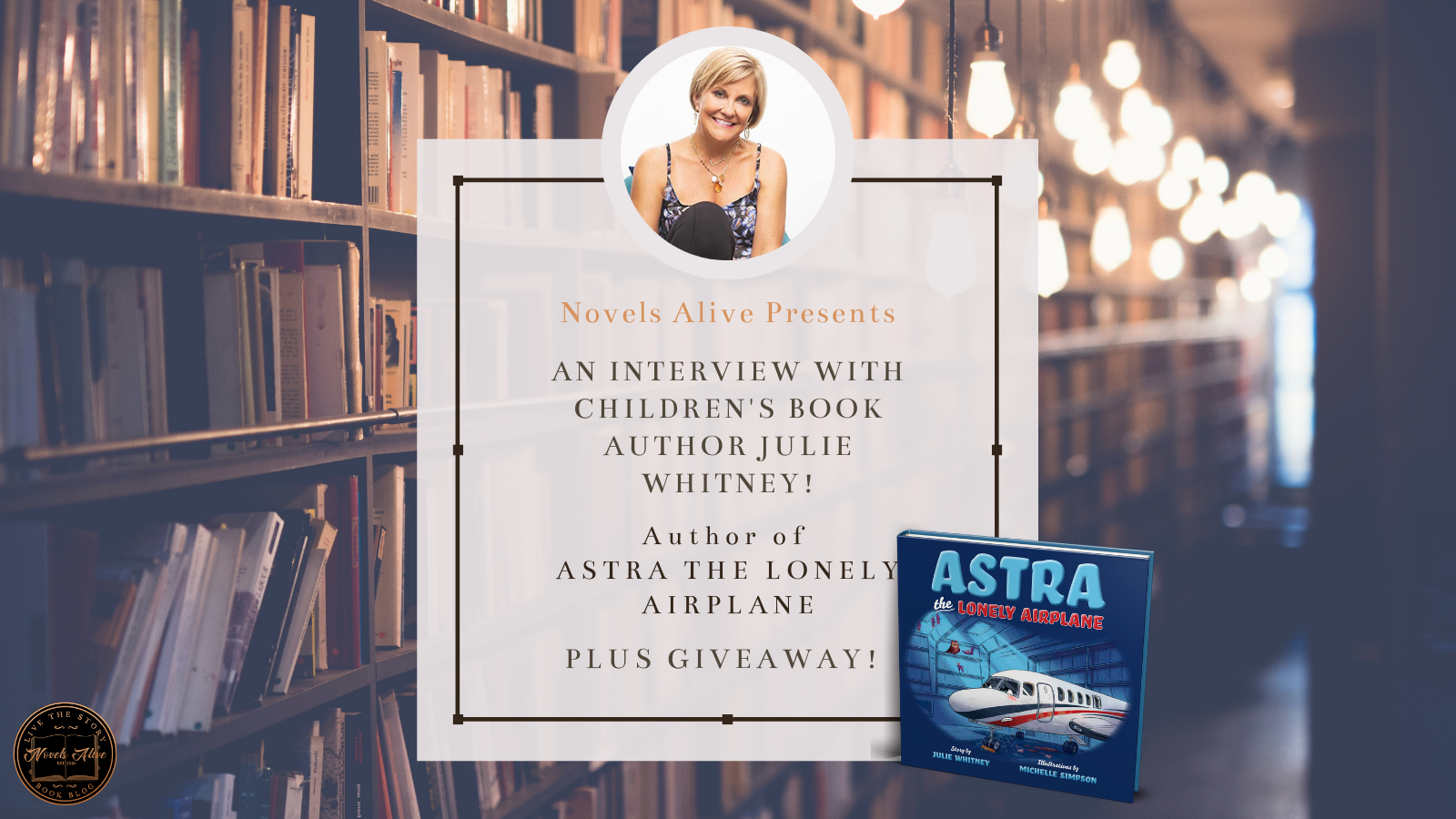 Today we welcome children’s book author, Julie Whitney to introduce us to the first book in her Astra series, Astra The Lonely Airplane. I asked Julie some questions parents and teachers may want to know about this darling children’s tale.

This book has an unusual back story as you channeled your anger and sadness into something positive. Tell us about your inspiration to start writing it.

When my husband unexpectedly lost his job as a chief corporate pilot on May 5, 2020 due to the COVID-19 pandemic, we were both in a state of shock and disbelief. We went together to the hangar to clean out his office and say goodbye to the Gulfstream (G100) jet he’d flown for 12 years. As I sat inside her beautiful interior one last time, I wept. I asked my husband, (Captain Dan in the book), what would happen if she was left sitting alone in her hangar for months on end, and he said that if her engines weren’t started up regularly she’d be in pretty bad shape. I went home feeling both angry and sad and started writing the book that night. I never intended to write a children’s book, but it came upon me unexpectedly and was very therapeutic. You might say I turned lemons into lemonade. Two more books in the Astra series are already written: Astra In Hollywood and Astra’s Canine Rescue.

I see that your book is dedicated to those employed in the aviation industry that lost their jobs during the COVID-19 pandemic. Can you expound a bit more about the impact the pandemic had on the entire airline industry?

The COVID-19 pandemic had a profound effect on the aviation industry, with millions of employees losing their jobs worldwide. Commercial passenger traffic in April 2020 was an estimated 96 percent lower than in April 2019, and the numbers remained down approximately 60% over 2019.

You personified an inanimate object in the book, which is often difficult to do. Can you describe Astra’s personality and talk about how you brought her to life for children?

As long as my husband has flown Astra they were constant companions and one very happy team. She is one of his very favorite planes of the many he has flown. So I made her happy and content at the beginning of the book flying the friendly skies with her best friend Captain Dan. Then I put myself in her “wings” so to speak and wrote about how she would feel sitting all alone in a dark hangar not being flown, wondering if she would ever be flown again? When a series of not-so-nice potential buyers come along, I thought about the playful ways that she could discourage them thinking about how a plane flies and the various issues that passengers complain about during a flight, such as turbulence, a sudden and sharp descent and the temperature being either too hot or too cold. And at the end of the book, I left the door wide open for Book Two, as she wonders if she will like her new home in California, just as any child would after a move to a new city. And of course, she is very tired and jet-lagged at the end of the book after her long, cross-country flight.

How did you find the right illustrator?

I took hundreds of photos of the real Astra and Captain Dan the day of our video shoot, knowing that it would help an illustrator capture them accurately. When we got to the illustration part of the process, my publisher showed me a portfolio of artists they’d used in the past. I narrowed it down to three, and Michelle Simpson nailed the illustration of both Astra and Captain Dan. I got teary-eyed when I saw her drawings, and I knew in my heart she was the one.

I provided art direction every step of the way, since I wanted to see a fuel tank leak and bats, owls, and mice in her hangar and cobwebs and dust, for example, in the scene where Astra is left alone with an uncertain fate. That actually ended up being the cover.

The book teaches children about planes, flying, math and geography, but it teaches some important life lessons as well. Tell me what the takeaway is for children.

The book also teaches children about overcoming life’s unexpected challenges that they may be faced with, (such as the recent COVID pandemic), dealing with difficult people (bullies they may encounter at school), adjusting to new circumstances such as the move to a new city, and having hope that everything will work out.

Tell us a bit about children’s reactions to the story?

Children from 3 to 10 seem to be loving the story. The younger children are memorizing its rhyming verse and even learning to identify the 50 states, while the older children think it’s a great read. They’re especially loving the fun facts about Astra and the real video of Captain Dan. I’ve gotten letters, cards and photos from children and teachers and that’s warming my heart.  They are drawing beautiful illustrations of Astra and Captain Dan, and quite a few have indicated that they want to become pilots, writers and illustrators! 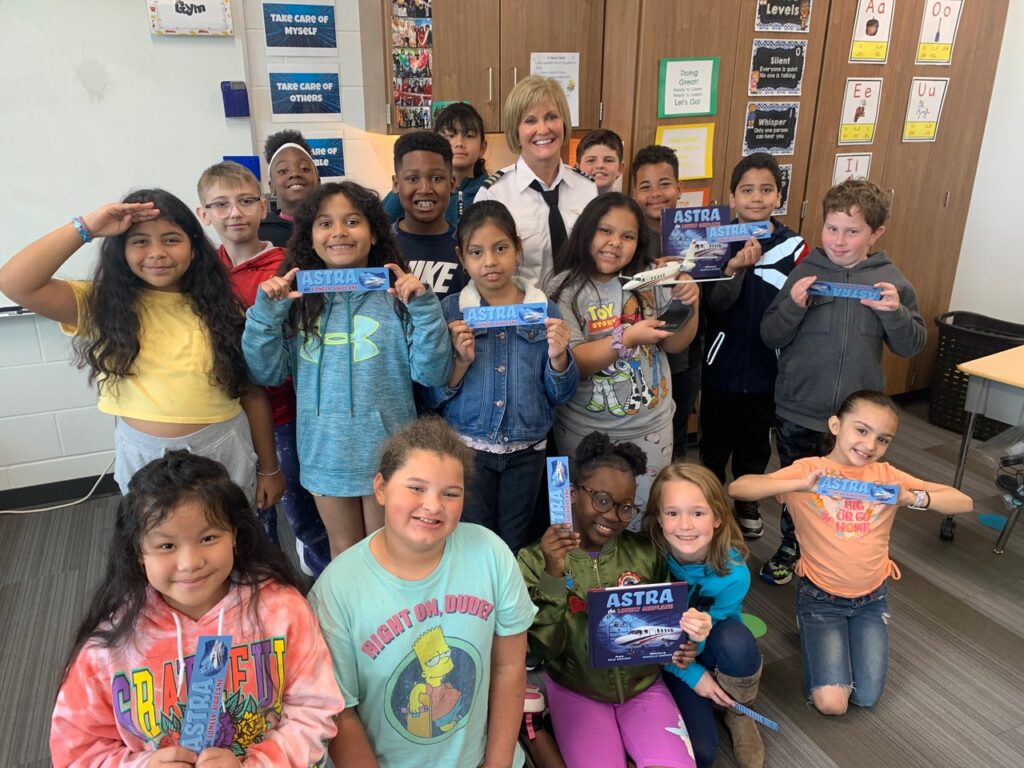 One of my favorite pieces of feedback was when a child said they loved how Astra “bonked” all the bad people who were trying to buy her. It was all harmless fun as she took nose dives, and cranked the heat and air, but it the book definitely helps children learn that bullying should not be tolerated.

Did your husband, Captain Dan help you with the book?

He was a very big help with the two-page-glossary of plane terminologies. He basically wrote if for me after I told him what I wanted to include.

And, of course, he starred in the three-minute-video that accompanies the book. We actually went to Astra’s empty hangar and shot a video on a hot September day. Captain Dan ad-libbed and did a great job giving kids a tour of Astra’s exterior and interior. Kids usually ask to view it a second time when I am showing it at a school or library! 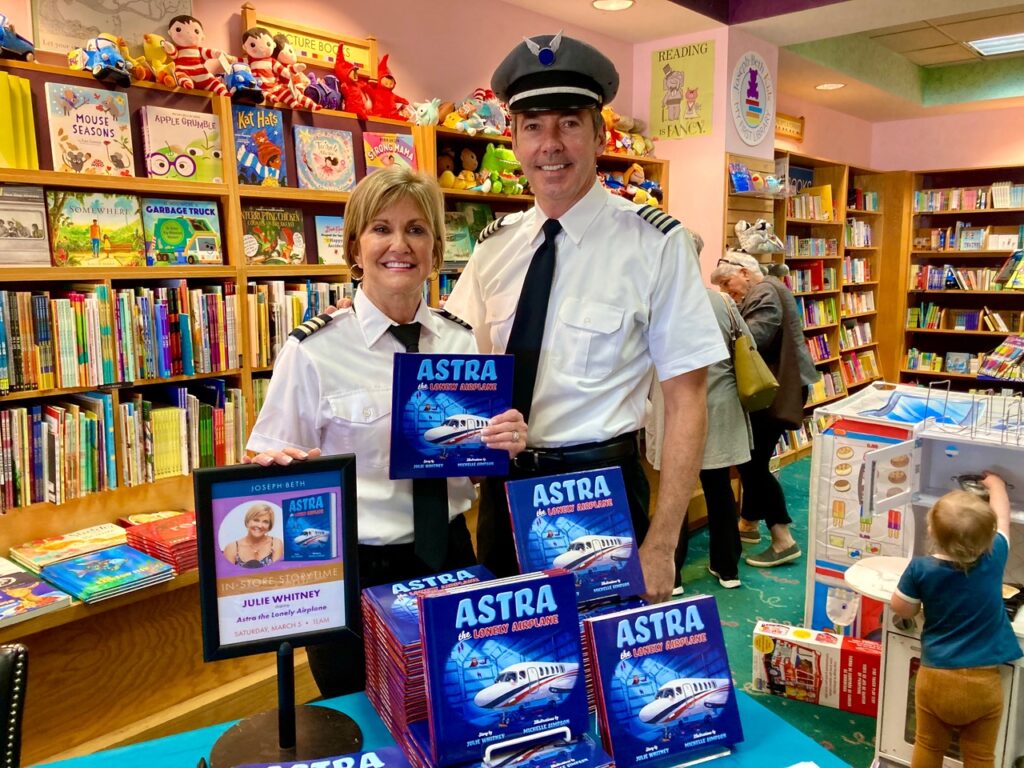 Anything else you want parents and teachers to know?

There are free Astra coloring sheets and activity sheets for children that may be downloaded as a supplement on my website at AstraTheLonelyAirplane.com.

You mentioned that the next two books in the Astra series are already written. What’s next after that?

I want to produce an animated Astra television series and have John Travolta voice the part of Captain Dan and Denzel Washington voice Astra’s new owner. Hey, a girl can dream!

Thanks so much for joining us, Julie, and for telling us more about the delightful Astra!

Astra is a sleek, shiny airplane who loves to go flying with her best friend, Captain Dan. But when Astra and Dan suddenly find themselves out of a job, Astra must wait in her lonely hangar for a new owner to come along and give them somewhere to go! As the weeks turn into months and the right buyer still doesn’t appear, Astra begins to wonder: Will she ever get to fly again?

Author Julie Whitney wrote Astra the Lonely Airplane after after her husband’s job as Chief Pilot of a corporate jet came to a grinding halt during the COVID-19 pandemic. She sat her beautiful interior one last time and openly wept, feeling sick to her stomach wondering what would become of her, and how long she would in the hangar before being flown again.

Astra the Lonely Airplane, the first rhyming picture book in the Astra series, is appropriate for young K-5 readers and also for preschoolers, who will enjoy memorizing the rhyming verse. The book includes an educational glossary of plane terminologies and interesting facts, as well as a three-minute video via a QR Code in the book that children can scan to see a tour of the real Astra given by the real Captain Dan. This book teaches children about planes, math and geography, and about overcoming adversity in challenging times and embracing new circumstances that may occur in their lives, such as a move to a new city. Astra the Lonely Airplane will leave readers wondering what will happen to Astra after she lands in her new home. Stay tuned for the second installment in the Astra series! 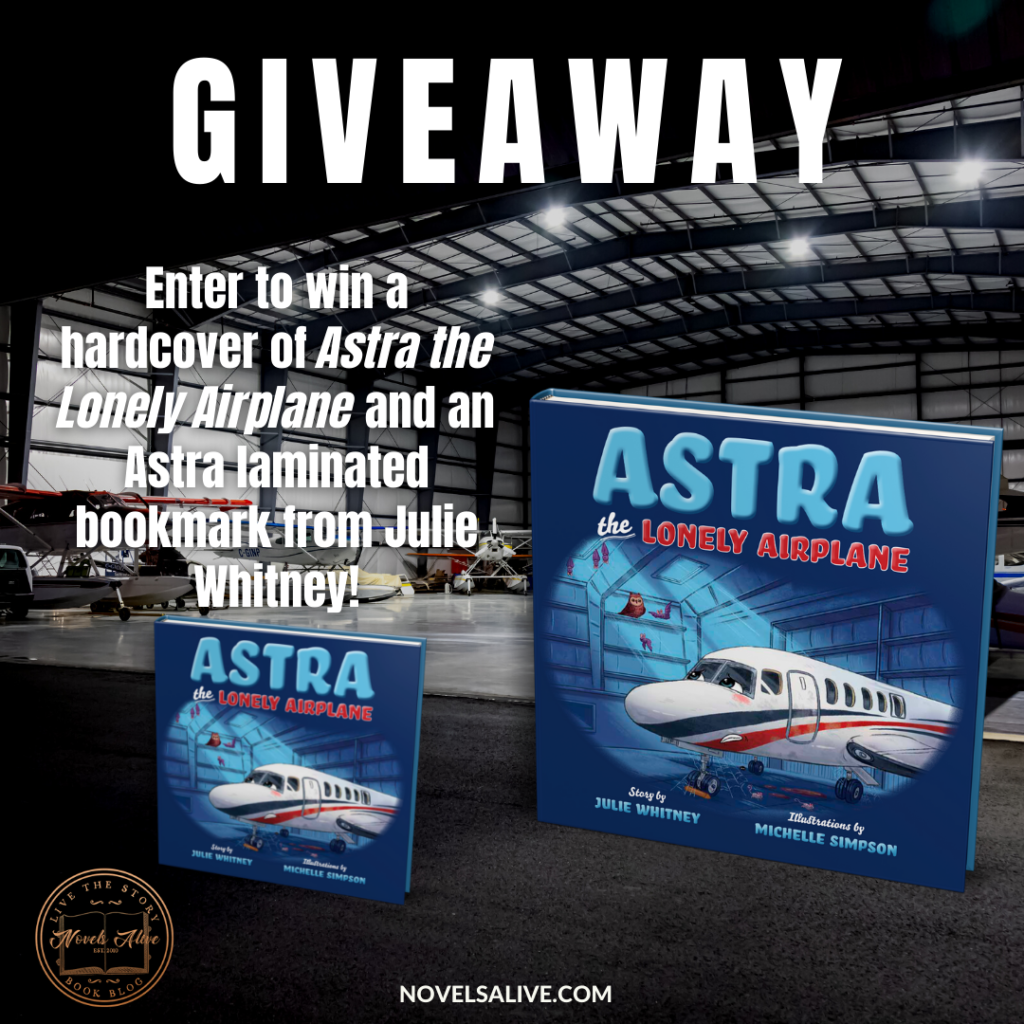 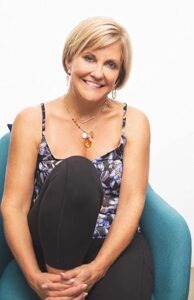 Whitney is a public relations professional with more than 35 years of experience, having worked on both the agency and client side and also in the television industry. Her company, Phillippi-Whitney Communications, LLC founded in 2000, represents both large and small clients in a wide variety of industries. She has promoted dozens of authors throughout her career, often supplementing the efforts of the internal PR teams of their publishers. She also works as on-camera talent, appearing in both television commercials and video podcasts. A Miami University grad, she lives in Cincinnati with her husband Dan, a corporate pilot, (Captain Dan in the book), who as a naval aviator and USNA grad, flew the P-3 Orion on active duty, and who has flown a Gulfstream G100 (Astra) for the past 13 years. With four grown children, they are now empty nesters, and love spending time with their Black Lab Brody, and also enjoy traveling, boating, golfing, and all types of physical fitness. A fun fact about Julie is that she appeared as an Extra in the movie “Grease” which was shot on location in the summer of 1977 in Los Angeles.