Llwddawanden is a hidden sanctuary where remnants of a once-powerful pagan cult carry on their ancient ritual practices, supported by a small but faithful following of servants, craftsmen, and laborers.

Cut off from the outside world by both geography and conviction, the Druids of Llwddawanden continue to venerate the Great Mother Goddess and to view themselves as the first-born and favorite of Her mortal children. While the belief that the most important of all divine beings gave birth to their ancestors and that Her spirit inhabits the body of their highest priestess is a tenuous conclusion in view of their reduced lot in life, the Druids of Llwddawanden believe it and are, for the most part, committed to carrying on the traditions handed down to them by their forbears.

Herrwn, the shrine’s chief priest and master bard, has the responsibility of overseeing the education of Caelym, the orphaned son of the cult’s previous chief priestess, as well as keeping the peace within the upper ranks of their order—two tasks that grow more difficult as the rivalry over which of the three highest priests will claim Caelym as his disciple grows, and as mounting conflicts between the current chief priestess and her only living daughter threaten to rend the fabric of a society that has endured for more than a millennium. 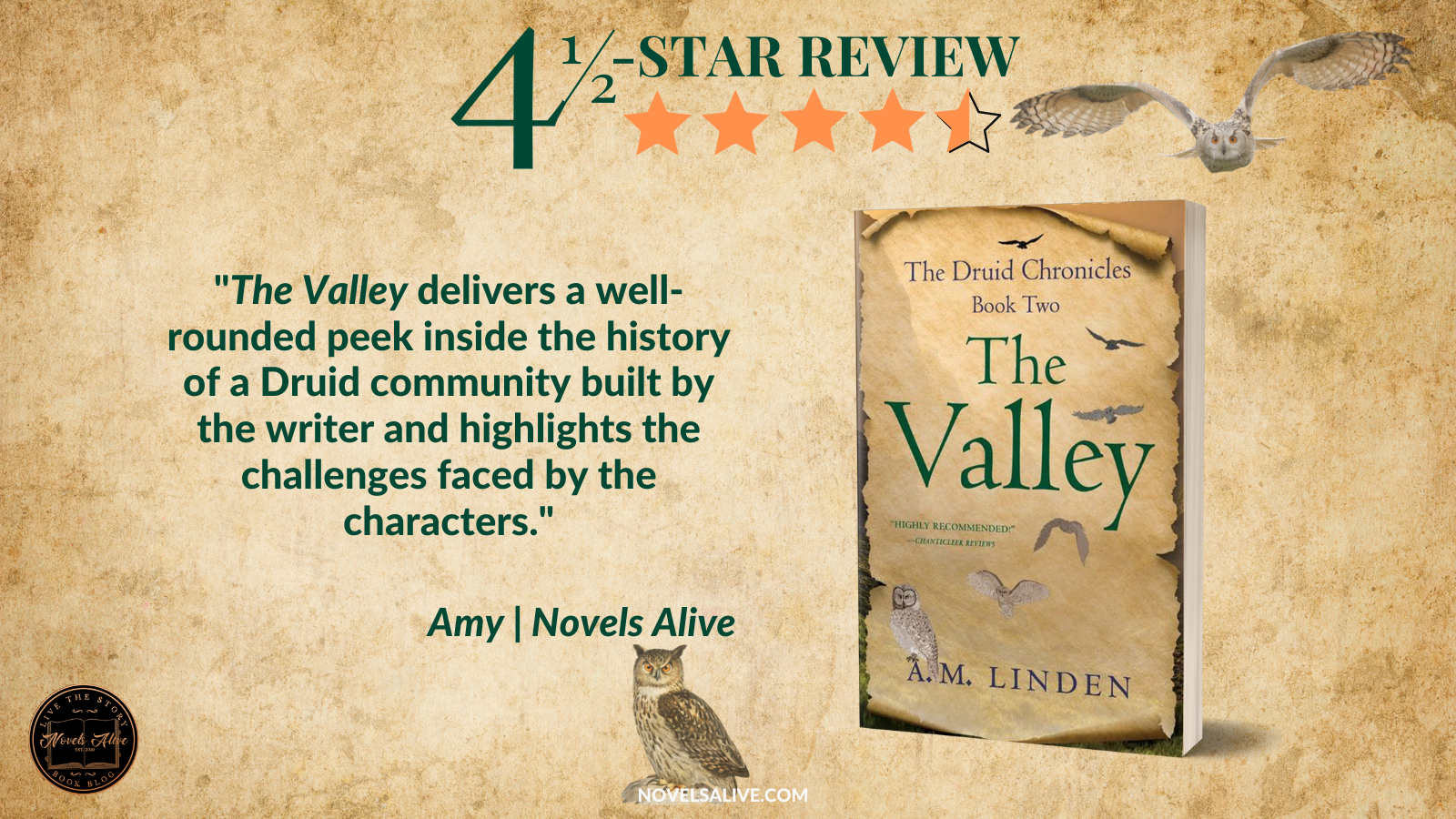 As the second installment in The Druid Chronicles, The Valley chronicles events happening a generation before that set the main story in motion. It’s an unusual way to deliver foundational material, but it certainly worked for the Star Wars franchise. Since author A.M. Linden plans to deliver five volumes in this historical fiction series, having a solid foundation is critical.

Set during the Dark Ages in Anglo-Saxon Britain, the focus is on a Druid community trying to survive as Christianity spread, threatening traditional rituals and beliefs. To help the reader, the author includes a cast of characters and a synopsis of the first book. The author’s note provides clear definitions addressing the literary creations of both the Saxon kingdoms and the secluded valley.

This installment focuses on Herrwn, chief priest and master bard, as he and his two cousins rise into their roles of bard, oracle, and healer. The story opens with Herrwn reminiscing about life in the valley before that fated last night of the winter solstice. He ponders the decisions he and others around him made, wondering if they contributed to the multiple catastrophes that befell his people.

From there, readers are taken back in time to experience life in the Druid community. The narrator makes observations along the way about how Herrwn’s decisions impacted the future. Of particular interest is the education of Caelym, who is one of the main characters in the first installment.

The Valley delivers a well-rounded peek inside the history of a Druid community built by the writer and highlights the challenges faced by the characters.

Ann Margaret Linden was born in Seattle, Washington, but grew up on the East Coast before returning to the Pacific Northwest as a young adult. She has undergraduate degrees in anthropology and in nursing and a master’s degree as a nurse practitioner. After working in a variety of acute care and community health settings, she took a position in a program for children with special health care needs where her responsibilities included writing clinical reports, parent educational materials, provider newsletters, grant submissions and other program-related materials. The Oath is the first installment of The Druid Chronicles, a five-volume series that began as a somewhat whimsical decision to write something for fun and ended up becoming a lengthy journey that involved Linden taking adult education creative writing courses, researching early British history, and traveling to England, Scotland, and Wales. Retired from nursing, she lives with her husband, dogs, and cat..

Monday, July 4
Review at Jorie Loves a Story (The Oath)

Thursday, July 14
Excerpt at What Is That Book About

Friday, July 15
Review at History from a Woman’s Perspective

Monday, July 18
Review at Jorie Loves a Story  (The Valley)

4.5-STAR REVIEW: THE VALLEY By A.M. LindenThe Valley delivers a well-rounded peek inside the history of a Druid community built by the writer and highlights the challenges faced by the characters.