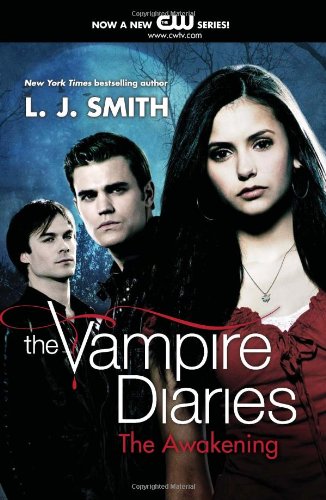 Nearly fifteen years before Edward sparkled and Bella got moody, there were the vampire brothers Salvatore and their lady love Elena Gilbert. The creations of writer L.J. Smith lived within the pages of the young adult novel series, THE VAMPIRE DIARIES. On September 10th, 2009 those characters emerged in Technicolor clarity within the CW network series of the same name, to the rabid delight of millions of fans.

In a fairly faithful adaptation to television from the original series of books, THE VAMPIRE DIARIES relate the horror, angst and romance of an unlikely love triangle between the “trying-to-be-good” Stefan Salvatore (Paul Wesley, Fallen), his “I-make-evil-look-good” brother Damon (Ian Somerhalder, Lost) and the “all-too-human” Elena Gilbert (Nina Dobrev, Degrassi: The Next Generation).

When the series premiered comparisons immediately began circulating on internet blogs, early media reviews and message boards, to the highly popular TWILIGHT series/films…so much so, even author L.J. Smith commented on her personal blog:

“I’m hoping that everyone will give it a chance–the first episode being the hardest to get past if you’re not a Twilight fan. Or maybe if you are. Anyway, I’m asking that people be patient with it and see if it does turn out to be adorable.”

I will admit to being one who immediately drew comparisons between some of the scenes in the series pilot to certain familiar scenes in the first Twilight movie, but the comparisons begin and end there. Over the remaining episodes of the first season The Vampire Diaries managed to prove over and over again why the novels have remained popular for more than a decade after the initial release, with fans still clamoring for more.

With a population including its fair share of vampires and a witch or two, Mystic Falls, the fictional backdrop for the series, is not your typical small town. When the brothers Salvatore return to their hometown after one hundred and fifty years, each with their own agenda, things really get interesting. Especially, when there is a beautiful young lady who bears a remarkable resemblance to the vampire vixen who first put a dent in their brotherly love and turned them both to the “dark side”.

[quote]Fighting her own personal demons, Elena Gilbert feels an immediate attraction to the new hunk at school, Stefan. He’s brooding. He’s sensitive. He’s got fangs. What is there not to love? But wait, following close on heels of Stefan’s snazzy footwear is the devilishly handsome Damon, who has a score to settle with his brother and piercing blue eyes that would make any girl look twice—thrice, before falling under his bad boy spell. Toss into the mix a be-witch-ing best friend, a jealous jock ex and a sudden rash of mysterious deaths and romantic obsessions become the least of your problems.[/quote]

Kevin Williamson, a master of blending teen angst with horror (Scream, I Know What You Did Last Summer, Dawson’s Creek), is the evil genius at the helm of the series and his familiar handiwork flows through every episode with mini-cliffhangers that leave the viewer counting the days until the following episode arrives. Under his command a brilliant cast of actors take his vision and bring it to life in a way that makes the unrealistic, realistic and ordinary, extraordinary.

To the delight of fans world wide, The Vampire Diaries has been renewed for a second season and on the page, the story continues with three new books featuring Damon as the main protagonist. The Return: Nightfall was released on Feb. 10th, 2009, followed by The Return: Shadow Souls on May 16th, 2010 and the upcoming The Return: Midnight, tentatively scheduled for release in March 2011.

For more on the television series visit www.cwtv.com and to read up or catch up on the Vampire Diaries novels, visit www.vampirediaries.com