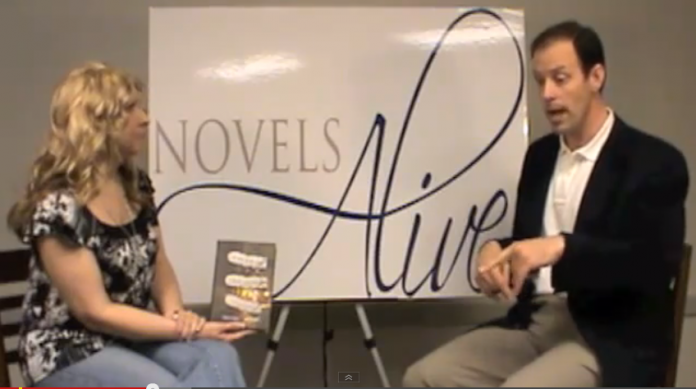 If you don’t know who Brad Parks is then Novels Alive TV suggests you take a moment here to find out, for this new author on the block is blazing a bright trail. Brad, with his debut book FACES OF THE GONE, accomplished something that no other author has ever done before.

Before I tell you exactly what he did and give you the scoop on FACES OF THE GONE, “The most hilariously funny and deadly serious mystery debut since Janet Evanovich’s ONE FOR THE MONEY,” according to the Library Journal, I want to give you the nitty-gritty on Brad the man.

[pullquote_left]“The most hilariously funny and deadly serious mystery debut since Janet Evanovich’s ONE FOR THE MONEY,”  [/pullquote_left]At the age of fourteen, Brad put his pen to the page and tackled the task of writing a local column on high school sports. This in turn led Brad to Dartmouth College and to an award-winning career in journalism. From sports to murder to disasters, like hurricane Katrina, Brad covered it all, and somewhere along the way he picked up a killer singing voice that could easily shine on Broadway. So Novel Alive TV is betting there is some theater in this author’s background as well.

We do know that his wit and humor are only outgunned by his charm and super-nice-guyness. Now to cut to the chase. Drum roll please…

What did Brad Parks accomplish that no other author before him has? Brad is the first author to have ever won the coveted Shamus Award and the Nero Award for the same book, FACES OF THE GONE. That this was also his debut novel makes this honor even more amazing.

It takes sheer talent to be both funny and suspenseful at the same time and this author oozes talent upon every page. FACES OF THE GONE, is the first book in Brad’s Carter Ross Mystery Series about an investigative reporter who runs afoul of murder, the police, and a killer determined to see Carter dead…

[quote]”A shooting can rattle a city, even if it’s gun-choked Newark. Investigative reporter Carter Ross finds himself with gruesome front-page news: four bodies in a vacant lot, each with a single bullet hole in the back of the head. In a haste to calm residents, local police leak a story to Carter’s colleagues at the Newark Eagle-Examiner, calling the murders revenge for a bar stick-up. But while Carter may not come from the streets, he knows a few things about Newark’s ghettos. And he knows the story the police are pushing just doesn’t make sense. The paper prints the police’s version anyway—under the journalistic theory that it’s better to be first than factual—leaving Carter all but alone to find the real story. He enlists the aide of Tina Thompson, the paper’s smoking hot city editor, to run interference for him at the office; Tommy Hernandez, the paper’s gay Cuban intern, to help him with legwork on the street; and Tynesha Dales, a local stripper, to take him to Newark’s underside. Soon, Carter learns the four victims have one connection after all, and this knowledge puts him in the path of one very ambitious killer.”[/quote]