Eileen Rendahl was born in Dayton, Ohio. She moved when she was four and only remembers that she was born across the street from Baskin-Robbins. Eileen remembers anything that has to do with ice cream. Or chocolate. Or champagne.

In addition to the Messenger series, Eileen Rendahl is the award-winning author of four Chick Lit novels. Her alter ego, Eileen Carr, released her first romantic suspense, HOLD BACK THE DARK, in 2009.

I draw very heavily on people from my own life. In my chick-lit novels, this is especially true. My poor sisters have endured a lot at my hands. That said, I don’t always have the right model and all of them need tweaking here and there. The characters need to be framed correctly so that who they are and what they represent has meaning and isn’t just description. I guess the answer is both. =)

Well, I’ve met a lot of them already  (see above)! I live with Jake from Do Me, Do My Roots. Paul the werewolf bartender from the Messenger series lives down the street and it’s a rare weekend that we don’t have a glass of wine together. Cinnamon and Ginger Zimmerman from Un-Veiled really do run the hair salon where I get my hair cut. Aimee from Hold Back the Dark happens to be married to Paul the werewolf bartender. We’re biking and drinking buddies.

Maybe Zach from Vanished in the Night. I had a pretty big crush on him as I wrote that book. I think I’d enjoy having dinner with his family.

I’m almost embarrassed at how easy this is to answer. Suzanne Brockmann’s Cosmo Richter. I would forsake everything if Cosmo called me. I lurve him. The super tough exterior that’s not even a deliberate mask over his sweetness and loyalty. He can’t help that his eyes are that color!!!!!

Before that, however, it might have been Lucky in Tami Hoag’s Lucky’s Lady. Another sensitive soul in a tough guy bod. Are you beginning to see a pattern here?

Here’s a not so big secret: I write in first person a lot and because of that, a lot of those characters are me. They have my voice and my world view (mainly). They never have to leave my head because that’s where they belong. Emily from Do Me, Do My Roots might have been the hardest to let go because she was SO me.

I wish I knew. I know it’s fun and I know I love hearing from people about my books. I’m kind of a Facebook addict and I’ve been dabbling in Twitter lately.

Sadly, probably quantity. There will always be authors who are committed to their art and will not put anything out for public consumption that is less than excellent. There are also always people who haven’t worked on their craft and will be willing to throw anything and everything out there. It takes a lot longer to get something right so I think quantity will win out.

I also think, however, that there will be more variety out there. Authors will be able to get stories out there that publishers might not have deemed commercial enough. I think it will mean a lot more creativity and a lot more fun for readers.

Speaking of control…when it comes to the cover art, when a character or couple is portrayed it’s not uncommon for them to be shown as a perfect model of themselves without any of the descriptive flaws found inside the pages of the story. Do you think that readers prefer the more romanticized version or would they rather see a truer version of the characters being portrayed? AND, which would you prefer?

To be fair, aren’t a lot of our characters idealized and romanticized? I’m pretty sure mine are. They may be me in a lot of ways, but they’re always thinner and prettier and have cuter clothes. The cover is setting a mood. I think it’s okay for the models to be idealized.

Grrrr. It’s so frustrating! Every time I stumble on a site where thousands of copies of my books have been downloaded for free, I want to cry. I have kids to put through college and I feel like these people are taking food out of our mouths. Most of them don’t understand that. Of course, I’ve had trouble making people understand why I won’t watch pirated movies or TV shows or use pirated software, either.

I’ve been working on getting some of my backlist available again. I’m super excited about having my chick lit novels available for Kindle and Nook. One of the things I’m most excited about is re-releasing Balancing in High Heels under its original title: Dancing Naked Under the Moon. You should see it’s gorgeous cover!

Here’s a little snipped from that book. My heroine, Alissa, is talking to her sister about her recent breakdown at her office where she ripped a FAX machine out of the wall and stomped on it: 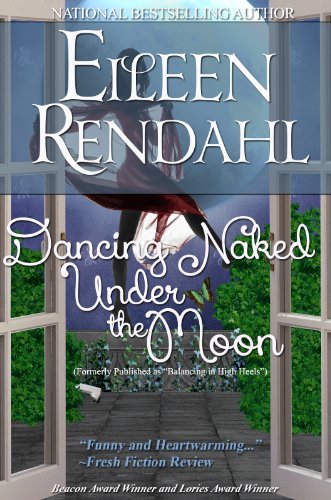 “I’m not sure anymore, Alissa. A few months ago, I wouldn’t have said you were the kind of person to rip a FAX machine out of the wall and try to use it as a trampoline,” Marsha observed. “Although you always were an overachiever. I suppose if you were going to start displacing your anger on inanimate objects, no one should have expected you to do it halfway.”

She had a point and not just about the over-achiever thing. I hadn’t thought I was the kind of person to rip a FAX machine out of the wall and tap dance on it either. It frightened me that I was. Really frightened me. The woman with the chair over her head and the woman ripping the FAX machine from the wall bore basically no resemblance to the intelligent, logical woman I had been sure was me.

Our thanks to Eileen for participating in “10 Questions With…” You can find her latest—a re-release, eBook of the contemporary mystery romance PETALS ON THE PILLOW—at Amazon.com.

PETALS ON THE PILLOW

HOLD BACK THE DARK

Both Eileens were born in Dayton, Ohio. She moved when she was four and only remembers that she was born across the street from Baskin-Robbins. Eileen remembers anything that has to do with ice cream. Or chocolate. Or champagne.

Eileen’s first novel with a major New York publisher was a double finalist for the Romance Writers of America’s prestigious Rita Award in its Mainstream Novel with Romantic Elements category as well as a finalist for the National Readers’ Choice Award. She has gone on to be a finalist for the Daphne du Maurier Award, the Booksellers Best Award, the Book Buyers’ Best Award, the Award of Excellence, and the Prism Award. Her work has won the Lories Award and the Beacon Award in the Mainstream Novel with Romantic Elements category and the National Readers Choice Award in the Paranormal category.

She started writing for the worst of reasons (she thought it would be easy!) and has spent years working on her craft. One of the things she loves about writing is that push to always learn more and grow. She recently graduated from the Creative Writing MFA program at Antioch University in Los Angeles.

She has had many jobs and lived in many cities and feels unbelievably lucky to be where she is now and to be doing what she’s doing.