This week on Novels Alive’s in association with our sister site, Be My Bard’s “10 Questions with…”  we have the amazingly talented author Jayne Fresina with us and to celebrate the upcoming release of her newest book, MISS MOLLY ROBBINS DESIGNS A SEDUCTION, a great contest as well on Be My Bard!

Most of it is imagination, although occasionally I use characteristics that I’ve seen in people I know. I like to draw up horoscopes for my main characters and that helps me find some of their personality traits too.

Molly Robbins! I would love one of her designs to go out in! And how handy to be a friend who is a designer! Also I think she would be a true friend, very loyal.

Elizabeth Bennet from PRIDE AND PREJUDICE. I loved the TV series Lost in Austen when the heroine got to change places with Lizzie!

Laughing – definitely! Unless I could have all three, of course. I’d rather make people happy and leave them laughing than make them sad. There is enough sadness and tragedy in the world. Personally, I read books to get away from that.

I think that would be Molly again. I have trouble saying “goodbye” to every character I write, but there is always another one coming right after so I don’t have too much time to mourn! With Molly, she was the last heroine in that series, so I felt as if I didn’t want to leave her behind. I wanted to know what was going to happen to her next. As she left Sydney Dovedale behind, I had to leave it too (after four books in the series) and I did shed a tear or two. However, then I started the next series and created another heroine I love.

I’m really not sure. I had a Twitter account but no one seemed to pay attention to it so I closed it down. I didn’t want to go on shouting with a lot of other people in a crowded room. I have a Facebook author page and a blog, so I post my info (and some random thoughts) there and just hope people find it. If it helps them discover my books, that’s great. I have met a few very good writer friends and some wonderful fans through the internet, so I’m grateful for that. I’m learning to be a bit better at self-promotion, but I doubt it will ever come naturally to me. Whether it helps or not, I have no idea.

The new opportunities available are certainly changing the game for everyone in publishing – for writers and for readers too. With so many books getting a chance out there, obviously there will be more for readers to choose from. I think that’s great. What’s on the shelf – real or virtual – is no longer dictated by what a few folks have considered worth publishing.

As far as my experiences, I have worked with a variety of publishing houses and it’s been a learning curve, for sure. Like readers who know what they like and what they don’t, I’ve learned what works for me as a writer and what doesn’t – who is good for me and my work, and who isn’t. I tried for a lot of years to get an agent, but even when I had one she was unable to sell my work to the “big” guys, so in the end I had to go it alone and managed to get a contract with Sourcebooks through sheer persistence and determination.

I’m a believer in everyone having a chance to do what they enjoy, so as far as I’m concerned the more opportunities the better. Readers are in control and really that’s how it should be. People know what they like to read – now they just have more places to find it.

And as a writer, you can have control of a great deal when it comes to your work, but one thing you can’t control – no matter which method of publishing you use – is whether people buy your book and enjoy it or not!

I prefer to see images that match my characters as far as possible. A good cover is so important! I think readers love to have a cover to refer to as they read the story and it helps if the characters seem to be exactly as they are written. I’ve noticed that the men on covers often get cut off from the chin up – poor things. I suppose that’s to allow the reader to imagine whatever features they want to see. Sometimes that happens to the heroine too, but more often – it seems – to the man. I’m assuming there is a marketing reason behind that, but I’ve no idea!

Ugh! Believe it or not there are still people out there who think there is nothing wrong with pirating. They don’t understand that it’s stealing. But sadly I’ve seen primetime TV comedies with the “good” characters engaged in pirating music from their computer and its treated as a joke, something that’s not really a crime. (How can it be a crime when sweet little “Pam” is doing it??)

I have a writer friend who had an email one day from an irate reader, threatening to sue the writer because she’d downloaded a copy of her book from a pirate site and got a computer virus from it. My writer friend patiently had to explain to the reader that she’d downloaded that book illegally. True story. So there are people out there who don’t get it.

MISS MOLLY ROBBINS DESIGNS A SEDUCTION is the fourth and final book in the Sydney Dovedale series. It follows Molly Robbins (Lady Mercy’s lady’s maid) back to London after she left her groom at the altar in LADY MERCY DANFORTHE FLIRTS WITH SCANDAL. The story traces her progress from shy country girl to talented, successful designer and dress-maker with her own business. Soon she’ll have more than she ever dreamed. But can she also find love? Carver Danforthe, the Earl of Everscham, has agreed to loan her money to get her business off the ground, but she’s made him sign a contract to ensure there will be “no tomfoolery” – oh yes, she’s well aware of his rakish reputation. The last thing she needs is a distraction like Carver Danforthe, right?

I’ve included a short excerpt below from a scene where Molly takes her first loan payment to Carver in person. Hope you like it! (Click on icon.) 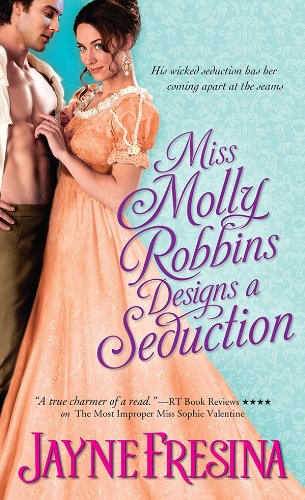 She Designs Dresses for London’s Leading Ladies…
Molly Robbins is finally stepping into the spotlight. Her unique dress designs have caught the eye of London’s elite. And if it means her own dress shop, proper Molly will make a deal with the devil himself—the notoriously naughty Earl of Everscham. But becoming his mistress is not a part of their arrangement. It’s right there in the contract’s fine print: No Tomfoolery.

He’s an Expert at Taking Them Off…

Carver Danforthe has a reputation for beautiful mistresses, cutting remarks, and shirking his responsibilities—not for indulging the ambitions of his sister’s maid. He must have been drunk when he signed that blasted contract. The stubborn female may thing she’s gotten the best of him, but what this situation calls for is a little hands-on negotiating…

All’s Fair in Love and Fashion…

Historical romance author Jayne Fresina sprouted up in England. Entertained by her father’s colorful tales of growing up in the countryside, and surrounded by opinionated sisters, she’s always had inspiration for her beleaguered heroes and unstoppable heroines. MISS MOLLY ROBBINS DESIGNS A SEDUCTION is the fourth book in her Sydney Dovedale series. She lives in upstate New York where she is working on a brand new regency romance series, the Book Club Belles Society. Visit www.jaynefresina.com for more information.

Contest is open to U.S and Canada addresses only. Sorry!

To enter–using the form on Be My Bard’s CONTACT page and supply your Name, Email, “Fresina Contest” in the Subject line and your mailing address within the message. That’s it! Good Luck!

Contest ends on February 13th with the winner announced on Valentine’s Day!