We couldn’t be more pleased to welcome New York Times and USA Today Bestselling author, Karen Hawkins to Novels Alive in association with our sister site, Be My Bard’s “10 Questions With…”

My characters are a mixture of all of these! I’d say they’re about 90% imagination, peppered with a variety of traits/thoughts/gestures I’ve witnessed in real life.

Whew, that’s a hard question to answer!  The heroes … well, heck yes, I want to meet all of them, although, I’m pretty sure they all look like Hugh Jackman. That’s not bad, but it could be confusing.

As for the heroines, I’d like to go shoe shopping with all of them at the same time. I think we’d laugh non-stop. I always try to write heroines who are smart, funny, and capable. Who wouldn’t want to hang with a woman like that?

Hmmm. Probably Sam from Suzanne Enoch’s Sam and Rick books, and Randulf from her THE DEVIL WEARS A KILT. I love her work, both contemporary and historical.

Of course, I’d love to deliver all three, but if I had to pick one, I’d pick LAUGHING. I feel that we get enough crying when we read the news or face inevitable life problems.

Recently, it was saying goodbye to Alexsey Romanovin from my next book, THE PRINCE WHO LOVED ME, coming in August. He was just such a deeply feeling, and yet tender character. I was quite in book-love with him by the time the story ended, and I had to work hard to shake it off before I began the next book. He’s just … well, you’ll have to read the book to see, but he may be my favorite hero thus far.

I love talking to my fans and I enjoy being able to reach them via Facebook, Twitter, Instagram, and Pinterest. I don’t know if it helps me to sell any books, but I’m always glad to have these ‘water cooler’ moments with people who love reading as much as I do.

I think we’ll definitely see fewer market trends and more creativity because the market itself limits creativity. Just note the 50 Shades of Gray path – a book sells well, so editors look for similar books to buy and put out. Just by that simple fact, the market is changed, and it alters what’s being put on the shelves.  Without the editor intervention, we should see a greater variety in books sold.

I would hope the quality would rise, too, but that’s up to each individual author.

Personally, I like concept covers the best, the ones without the characters because either 1) the characters on the cover change my perception of the book, or 2) they’re not drawn accurately enough for me to accept them AS the characters I perceive are in the book. I’d rather let the reader ‘see’ the characters via the author’s description than put something on the cover that will be misleading.

I think it’s sad. I don’t support the pirating websites and actively try to pull my works off them. I think those sites will become more and more a topic of discussion as the market changes from physical bookstores to online bookstores.

Sure! While we’re waiting for the first book in my new Princes of Oxenburg to come out in August, a reprint of one of my favorite backlist books, LADY IN RED, is coming out February 25th. 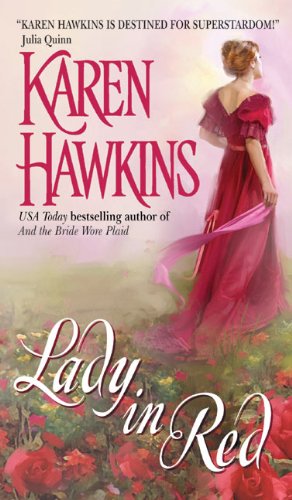 When a priceless treasure brings together . . .

W ealthy and powerful Marcus St. John, the Marquis of Treymount, must recover a lost family heirloom that is in the possession of Miss Honoria Baker-Sneed. All he needs to do is convince her to relinquish his treasure for a reasonable sum. But when he meets Honoria, he’s surprised to discover she is as headstrong as she is beautiful.

Honoria is astounded when Marcus shows up on her doorstep and arrogantly demands a ring that is rightfully hers. She agrees to return the heirloom, but on one condition: He must sponsor her sister into society—an idea Marcus considers absolutely preposterous.

Only love can decide the outcome.

W hen a heated argument ensues, they find themselves in a compromising position and are forced to marry. What starts out as a marriage in name only soon becomes much more as Marcus realizes Honoria has stolen his heart. But can he prove to his wife that he is worthy of her love?

Publisher’s Weekly says of LADY IN RED: “Marcus St. John, the Marquis of Treymount, has finally discovered that the St. John talisman ring, a family heirloom rumored to find its bearer his own true love, has made its way into the possession of his antique auction nemesis, Miss Honoria Baker-Sneed. Desperate for funds after a bad investment has left her and her younger siblings in difficult straits, Honoria offers to sell Marcus the ring for an outrageous sum, sparking a series of tense negotiations complicated by a swelling attraction. … But while the talisman ring can find a St. John his bride, it takes Marcus himself to keep her. Lively, fast-paced and liberal with humor!”

New York Times and USA Today best-selling author Karen Hawkins is known for her wonderfully humorous and emotion-tugging historical and contemporary romances. The author of over 30 novels, Karen writes for a living between shopping for shoes, playing around on Facebook and Pinterest, looking for fun items for Hawkins Manor, and napping, although usually not at the same time. Sometimes, for fun, she takes Instagram pictures of her two rescue dogs, Sadie and Teke, and posts them online.

Karen lives in snowy Massachusetts, with her husband, aka Hot Cop, and her two dogs. Her children are both out of college and have become productive, non-violent members of society. Karen writes six to eight hours a day when not obsessively reading research books on Regency-era Scotland, snacking on chocolate, or looking out the windows of her house and thinking about gardening. Her hobbies include sculpting, oil painting, playing badminton, and — ok, ok, she doesn’t have any hobbies, but if she did, she’s sure they’d be something refined and fascinating.