This week we have one of my favorite authors of all time visiting with us at Novels Alive and Be My Bard.com.  A very familiar name on the New York Times Bestseller’s list, the incomparable…SABRINA JEFFRIES!

The heroine, of course! I want to have all the fun and get all the glory. J

I’ve done both, so I don’t know if I have a preference. The most important thing is that the villain be a real person. He (or she) has to have characteristics that make his/her evil comprehensible. The behavior is still unacceptable, but it’s important for the reader to see how the person became warped. I can’t stand cardboard villains, and I don’t believe that people are born evil. Their experiences and choices make them into what they become.

Only one?? I would happily enter Meljean Brook’s THE IRON DUKE, if only to see that world firsthand. It sounds so fascinating—just enough like Regency England to feel familiar, but with airships and mechanical limbs and nanoagents that heal a person. I would love to see it. Plus, the Iron Duke himself is hot!

My other choice would be PRIDE AND PREJUDICE, of course, just so I could see Regency England firsthand and meet Mr. Darcy.

It would have to be BECOMING JANE, about Jane Austen. I would kill to be able to meet her and have a woman-to-woman talk. Or rather, a writer-to-writer talk.

Nothing makes it easier to deal with bad reviews. I can read fifty good reviews and one bad one, and the bad one is the one that sticks in my mind, especially if I think that the reviewer is being unfair. But I keep those thoughts to myself, since everyone is entitled to their own opinions, and opinions are just that—opinions. I get enough completely contradictory ones to teach me that I can never please everyone.

Erotica. J Magical realism. Time travel. I tackled paranormal and contemporary and suspense with my Deborah Nicholas books, so I can’t list them, but I wouldn’t mind writing any of those again sometime.

Meljean Brook’s THE IRON DUKE! Then I could see the world. I’m not visual, so I’d really love to “see” that world.

My upcoming book, HOW THE SCOUNDREL SEDUCES, has two elements I’ve always wanted to explore. The first is a heroine who is a peeress in her own right (which means she can inherit a title for herself). It was fun to play with what happens when a heroine is faced with the same issues facing a male title-holder who has to marry for duty and bear an heir to care for the estate, etc.

The second element was the Romany. I find their culture fascinating, especially after reading some period sources about them and some sources written from their own perspective. I got to deal with that in my latest, which was great fun. 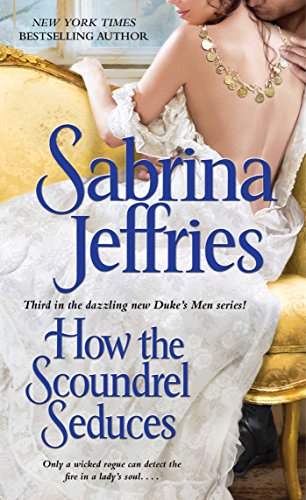 Investigator Tristan Bonnaud has one aim in life—to make sure that his half-brother George can’t ever ruin his life again. So when the pesky Lady Zoe Keane, the daughter of the Earl of Olivier, shows up demanding that the Duke’s Men find a mysterious gypsy woman, he seizes the opportunity to also hunt for a gypsy friend who knows secrets about George. Tristan doesn’t expect to uncover Lady Zoe’s family secrets, as well…or end up falling for the woman who will risk all to discover the truth.

Caffeine addict, Third Culture Kid, chocoholic, and popular novelist with more than six million books in print, Jeffries defies labels. Her biting humor and simultaneous warmth endear her to her 10,000 Facebook fans, Pinterest followers and loyal Goddess blog readers. At home in front of a crowd—any crowd (no really, just hand over the microphone and get ready for some fun)—Jeffries is a sought-after speaker, as evidenced by her 2010 gig as emcee for the National Romance Writers of America’s 30th Anniversary Awards Ceremony.

While Sabrina treks through remote locales in the name of research and rubs elbows in the big cities with other industry professionals, she says her favorite destination is home. She lives in Cary, North Carolina, with her two best guys—husband, Rene, and adult son, Nick, who has inspired her to actively champion the cause of autistic children.