Where did you get the inspiration for your series/book?

The inspiration for the second series of Hot & Nerdy novellas came from a conversation with my daughter. I was asking her about Instagram because she really likes it and I know nothing about it. I was trying to figure out if it was a social media site I should be using for promoting the first Hot & Nerdy trilogy. I had no intention of writing more and said so to her. Then I thought, “Unless I write another trilogy with hot and nerdy guys…” She loved the idea and started brainstorming what kind of nerds I should write about and the trilogy was born.

Who is the celebrity who inspired the characters in your latest book?

I use celebrity inspiration to help me get to know all of my characters before I start writing. Adam Hayes is a combination of actors: Charlie Barnett from Chicago Fire (dimples) and Jesse Williams because look at those eyes.

For the heroine Reese Carter, I used Lizzie Caplan who played Janis in the movie Mean Girls.

I write contemporary romance. As a writer, I kind of stumbled into it because the genre wasn’t really on my radar. I thought I wanted to write romantic suspense. My voice, however, really belongs in contemporary. My Hot & Nerdy novellas are similar to my single-title contemporaries, but the characters are younger and therefore, the novellas are categorized as New Adult.

I love reading and writing romance because of the happy ending. Life is stressful and uncertain and full of disappointment. I love knowing that when I pick up a romance I’m guaranteed a happy ending.

If you were not writing, what would your profession be?

I used to be a middle school and high school English teacher. If I wasn’t writing, I might go back to that full-time, but I doubt it. I currently have a small collection of part-time jobs that I juggle around writing and my kids’ schedules. I like being around for them, so I don’t think I’d go back to regular full-time job.

What is your go-to snack or meal when you are on deadline?

Chocolate is always the go-to (as I believe it is for most writers). I keep a bowl of M&Ms on my desk and there are days when I’m under deadline where I feel like I’ve eaten my weight in M&Ms. I do often have other kinds of chocolate around as well, like dark chocolate sea salt caramels, but it’s not an everyday occurrence.

How many more books do you have planned in the series?

This series is wrapped up. I planned it as a trilogy of novellas. In the spring, when they get released as an anthology, it will include a bonus chapter/epilogue. Beyond that, I don’t know if there will be any more Hot & Nerdy books.

What would the theme song for this novel be & why.

If I had to pick a theme song, it would be the Batman theme song (from the old 60s TV show) mostly because it would drive Adam, the hero, nuts. He’s a Marvel fan and always argues with Reese, the heroine, over her love of Batman.

Do you have any other upcoming releases that readers should know about? 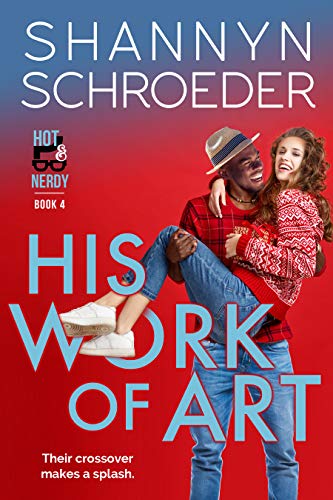 The Hot & Nerdy trilogy releases in back to back months. HIS WORK OF ART now, in November it’s HIS NEW JAM, and in December HIS DREAM ROLE.

Next summer, my new single-title series, FOR YOUR LOVE, will release with the first title – UNDER YOUR SKIN. The series is about the O’Malley family in Chicago who were first introduced in my fourth O’Leary book. So this series is a spinoff, but can be completely read without having read my other books.

Reese Carter is definitely not your average college girl. She’d prefer to spend Saturday nights playing Hero’s Crusade than attending a wild frat party on campus. When she bands together with Adam, fellow comic enthusiast and illustrator, it appears that Reese has formed a dream team sure to propel her writing into the comic hall of fame.

Adam Hayes has never met a girl like Reese. She’s sassy, smart, and loves talking comics, although he can’t see why she’d choose DC over Marvel. He’s thrilled to finally put his artistic chops to use in their upcoming comic project. But this relationship is strictly professional. Or so he tells himself. When the two combine forces, they churn out magic in more ways than they had planned; they never expected to develop a steamy romantic sub-plot of their own…

Shannyn is giving away a digital copy of HIS WORK OF ART. Enter via the Rafflecopter below.

Shannyn Schroeder is the author of the O’Leary series, contemporary romances centered around a large Irish-American family in Chicago and the new Hot & Nerdy series about 3 nerdy friends and their last spring break. When she’s not wrangling her three kids or writing, she watches a ton of TV and loves to bake cookies.