Apparently I’m a little obsessed with food. I’ve written entire scenes that focus on the characters’ enjoyment of a meal. I’ve even written a love scene based around a fried bologna sandwich.

I know, it’s possible I have a problem, but I enjoy giving my stories flavor by describing the smells and tastes my characters are experiencing. And it so happens  that my cowboy heroes really enjoy their food, be it bologna, or smoked marbled brisket with barbecue sauce, or spicy hot and creamy jalapeno macaroni and cheese.

See! I can’t help myself. I enjoy describing food. Perhaps I missed my calling writing menus.

Anyway, what inspires my fictional food is actual food. In my ONE NIGHT WITH A COWBOY (Oklahoma Nights), it was the fried smoked bologna sandwich people drive to the real Joseph’s Fine Foods in Drumright, Oklahoma to eat. In MIDNIGHT RIDE and MIDNIGHT WRANGLER (Midnight Cowboys) Tyler and Rohn eat at a roadside barbecue joint inspired by one near where I live.

The smoker at this place, housed in what amounts to not much more than a shack, is huge and fired up early each morning, filling the surrounding area with a mouth watering scent. The owners smoke countless pounds of ribs and brisket and when it’s cooked, they serve it to patrons out of a trailer window until the meat is gone.

In this age of fast food it’s nice to see a place that puts in the hours it takes to create the smoky delicacy. And nice to see they don’t mass produce it. Here it’s first come, first served and any latecomers are the unhappy losers.

There were times in MIDNIGHT WRANGLER that my lonely widowed hero, Rohn, had not a whole lot to feel happy about but he always knew he could enjoy a nice order of barbecue, cornbread, and mac and cheese from the place his ranch hands always frequented. I feed them well in my books, but I also torture my characters sometimes too.

But not to worry, I end Rohn’s loneliness soon enough. In true food obsessed writer fashion I have him accidentally run into his high school sweetheart again after a twenty-five year separation at—you guessed it—the barbecue joint.

One reviewer commented that my books make her hungry so I recommend having a snack nearby as you enjoy Rohn and Bonnie’s journey to happily ever after in MIDNIGHT WRANGLER. If smoked barbecue isn’t available I’m sure cold egg nog with a dash of nutmeg and a shot of spiced dark rum, or hot cocoa with a peppermint stick stirrer and some crisp Christmas butter cookies will do. I’m an equal opportunity foodie. Enjoy! ~CatJohnson 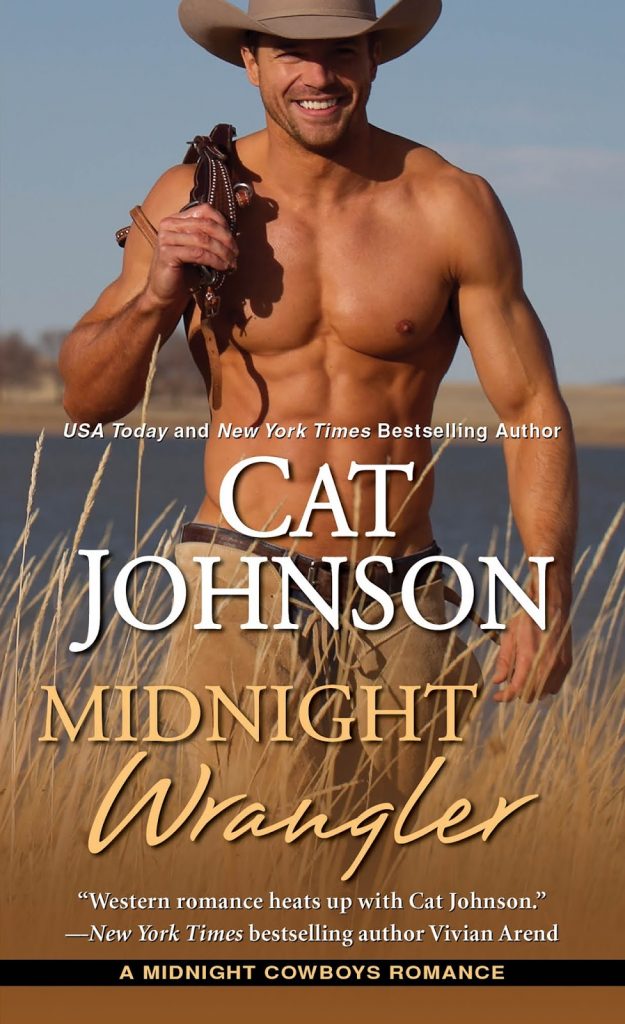 Rohn Lerner is a successful Oklahoma rancher.  He’s old enough to know what he likes, and still young enough to enjoy it. But losing his wife five years ago wore him thin. He’s not ready to date, but he needs someone to share a meal with as badly as someone to warm his bed.

One Woman with a Secret…

Bonnie Martin fled her Oklahoma home years ago, leaving behind her abusive father, and Rohn, the lost love she never forgot. Now she’s back to settle her father’s estate, but she has no idea that she’s about to bump into Rohn or that they’ll fall for each other all over again.

One Night That Changes Everything…

A New York Times and USA Today bestselling contemporary romance author, Cat Johnson is known for her creative marketing practices. Cat has sponsored bull-riding cowboys, promoted romance using bologna and owns a collection of cowboy boots and camouflage for book signings. A fair number of her research consultants wear combat or cowboy boots for a living.