Previous article
BOOK BLAST: INTO THE FURY by Kat Martin
Next article
INTERVIEW: CRASH AND BURN by Michelle Callahan With Giveaway

We are ecstatic to have New York Times Bestselling author, Eileen Dreyer, with us today!

How did you get started writing?

I don’t know if you’ve heard this before, but there’s a great quote by Moliere. “Writing is like prostitution. First you do it for fun, then you do it for a few close friends and finally you do it for money.” That is exactly how I began writing. I was 10 years old and had run through every Nancy Drew ever written. I was so frustrated, because I wanted more. But it would be another year. And then the light bulb went on. Wait! I can write them myself. Even better, I can make them turn out the way I want them to. Even better, I realized that I could control everybody in the story(when you live in a 2 bedroom house with 10 people, control is a lovely fantasy). Along about 7th grade I realized that if I wrote stories starring classmates and famous rock stars, I would always have somebody looking for me in the morning. My first experience with a readership. Quite heady. And then, years later, after I’d been married, working as a nurse and had two children, I realized that I wanted more. I wanted to share my books with lots of people. It’s 42 books later and I have to say it’s one of the best decisions I ever made.

What genre(s) do you write in and why?

The two main genres I write in are romance and suspense. I worked in trauma nursing for almost two decades. There were times romance saved my life. Again, I got to make things turn out the way I wanted them to in writing, and because I only wrote romance then, some days it was the only way I could make good things happen to good people. After I retired, I decided that I wanted to delve in the darker, more fractured side of humanity. So I added suspense to my resume. But I got something out of that, too. The bad guys never got away with it. The heroine meted out justice, even if it wasn’t legal justice. Very satisfying.

Within romance, I’ve since added a few sub-genres: romantic suspense(I can’t help it. I love action), paranormal, time-travel, and right now, historical—regency to be specific(again with the suspense, though. I call my DRAKE’S RAKES series Historical Romantic Adventure).

Where do you get the ideas for your stories?

It’s more like, when do you stop getting ideas for stories? We have a saying, ‘stop me before I plot again.” When you first begin writing, you have to work hard to pick the nuggets out of your experiences, whether personal or in the news or other art, be it books, plays, movies. But the more you practice the art of saying, “What if?” the easier it becomes and a normal news item becomes a plot. Authors are kind of like conspiracy theorists. We never just listen to the news. We roll it around in our heads and see whether there’s a different explanation, whether we can involve interesting characters, whether it fits with other ideas we’ve had.

For the book that’s out now, A FINE MADNESS, I started with a book I read called Class by Jilly Cooper, a funny, non-fiction look at the British class system. It made me want to spin a tale that gently sent up the sometimes incomprehensible differences. I gathered that up with a long fascination with historic stately homes, a trip to Yorkshire where we drove through the town of Giggleswick(I mean, come on. How could the hero, Ian Matthews not be Viscount Giggleswick, just so Quinn Rutledge, my American heroine, can comment on it?). Add in an experience with the little tunnels the Brits have carved under roads for migrating hedgehogs, which turned into a group of committed animal lovers who objected to a certain guest coming to the house, a ghost(I love ghosts), and I had what I hope is a fun romp. And then as I was writing it, I thought, what if the heroine whose job is rehabbing great houses who have belonged to one family for centuries, had no real place of her own? A giant game of What if.

Are you an avid reader?  When you do read someone else’s writing, what is your favorite genre?

I read everything, from high fantasy to low comedy to non-fiction. You name the genre, and I’ve read it. I guess my favorite genres are suspense, fantasy and, of course, romance. I think it’s why I’ve finally moved into historical romance with my newer work. Because when I’m stressed, I rely on Regency romance to get me through. A friend asked why once, and I shrugged. Well, the characters are clever, charming and witty, they bathe(very important to me in a romance), and in the end, the worst thing that happens is the heroine runs off with the vicar instead of the duke. Life goes on.) I like the certainty of genre books. You know the message you’re going to get. Your beliefs are bolstered, and your world settles a little more into place. In romance you have hope, which is why I think it’s such a massive seller. In mystery and suspense you get justice and in fantasy and science fiction you get possibility.

Tell us about your next book & when is it being published?

Let me tell you about A FINE MADNESS. My first 25 romances were written for Silhouette as Kathleen Korbel. I’m very proud of them. They put me in the Romance Writers of America Hall of Fame. Madness is a Korbel book written in 1991. I’ve recently reclaimed my rights to 20 of my books and putting them up again, including Madness.

The basic story is that Quinn Rutledge is an American hired to supervise the restoration of an old stately home in order to turn it into a luxury hotel. Her job is difficult enough, since the house comes with a resident ghost who is not pleased that people are mucking about with her house. But then she is invaded by a gentleman from corporate sent there to evaluate her work. A gentleman who reminds her of the worst of her very upper-class ex-husband, who found he couldn’t stick it out with a middle-class orphan with no family and no history.

What she doesn’t know is that her guest is Ian Matthews, Viscount Giggleswick, who has scandalized his very ancient family by taking on a gig with the Royal Protective Service. He is at Hartley Hall to evaluate security measures for a top-level meeting to be held before the Hall officially opens. Not only does Quinn not know about the meeting, she doesn’t know about the threats that have been received against some of the attendees.

Ian will have just as much trouble as Quinn, though. His game leg is not responding well to the tricks and traps the house ghost, Mary, has set for him, the most troubling being her attempts at matchmaking with the beautiful restorer.

Throw in a squad of British eccentrics that include a retired colonel straight out of Kipling and a Great Dane named after Wellington’s horse, and I hope you get a good romp. I know I had fun.

Thanks so much for inviting me to play. If you want to know any more about any of my books, feel free to stop by at www.eileendreyer.com, or www.facebook.com/eileendreyer. Or Twitter, or Instagram, or Pinterest….you get the idea. I even have a newsletter you can sign up for on the webpage. I hope to hear from you. 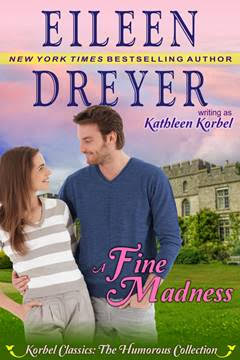 Quinn Rutledge has been hired to remodel historic Hartley Hall into a 5-star hotel. Ian Matthews, a Special Forces officer in the Queen’s Protection service, is vetting the hall’s security for a secret international meeting, and presents himself to Quinn as a corporate officer checking on her progress.

All seems simple enough, until the pair uncover a crazed band of terrorists, a destructive ghost with an odd sense of humor, and an inconvenient attraction to each other.

Neither have time for love, and Ian is the embodiment of everything that went wrong with Quinn’s first marriage. But Love doesn’t care.

2016 sees Eileen enjoying critical acclaim for her foray into historical romance, the Drake’s Rakes series, which Eileen labels as Regency Romantic Adventure that follows a group of Regency aristocrats who are willing to sacrifice everything to keep their country safe. She is also working on her first non­fiction book, TRAVELS WITH DAVE, about a journey she’s been taking with a friend’s ashes.

A retired trauma nurse, Eileen lives in her native St. Louis with her husband, children, and large and noisy Irish family, of which she is the reluctant matriarch. She has animals but refuses to subject them to the limelight.