INTERVIEW: A Visit With Victoria Vane

You’ve been a flight attendant (is that the proper term now?), and worked in radiology (this is from memory so correct me if I’m wrong). In the back of your mind or heart, did you always want to write?

I never knew I had the talent for it! I’ve always loved books and was a good technical writer but never even took a creative writing class in college. My best subject in school was radiation physics! Isn’t that crazy! I’ve always loved history and “epic” love stories and one day I woke up with one in my head! I was forty-four years old and struggling with a horrible boss so I started writing as a creative outlet, never dreaming it would amount to anything. It took me fourteen months to write my first book; it was a bloated monster at 189,000 words! Amazingly, I sold the book six weeks after finishing it. THE HIGHEST STAKES, a work of historical fiction set in the world of 18th century horse-racing, was published in 2010 by Sourcebooks (after 40,000 words were edited out!). I’ve never looked back! I began in historical fiction and have since moved into historical and contemporary romance. I’ve just finished my 22nd book. Who knows what I’ll try next – maybe romantic suspense?

What have your previous careers done for your writing?

Although I haven’t written anything yet that is related to a past job, (other than modeling a character in one of my books after the horrible boss I mentioned earlier) my interests and hobbies have very much played into my stories. Horses have been a big part of my life. I’ve ridden, trained, and shown them. This experience is invaluable as many of my books feature horses in some way.THE HIGHEST STAKES, FORTUNE’S SON, THE DEVIL YOU KNOW, and THE SHEIK RETOLDas well as my contemporary Western romances. My June 2016 Sourcebooks release, SADDLE UP, features wild horses. I’ve had personal experience with this as well, as I adopted and trained a BLM mustang many years ago. Everything I’ve ever experienced in my life has contributed in some way to my writing. Without those years and experiences, I doubt I could have had any success in this business.

Your first books were historical fiction under a different pen name. Why did you strike out into romance, both historical and contemporary?

My first two books were historical fiction with strong romantic elements so it wasn’t a huge stretch to move into historical romance. I just had to tone down the history and put the romance center stage. My main reason for changing genres was market driven. I wanted to make a career of writing and his-fic wasn’t doing well compared to romance. Things have changed again with the huge success of many historical TV series so I may very well move back in that direction this year.

Are you going to re-visit the Georgian era & possibly DeVere any time soon?

Absolutely!! I already have! After a twenty-month hiatus from historical romance I have written three new historicals. BRETON WOLFE, my first foray into the Viking era that I wrote for Kathryn LeVeques’s De Wolfe Pack Kindle World. Happily, it’s been very well received!

I’ve also written my first Regency story,THE REDEMPTION OF JULIAN PRICE that I contributed to the ONCE UPON A TRUE LOVE’S KISS anthology. It’s a wonderful, heart-warming friends to lovers/marriage of convenience story. 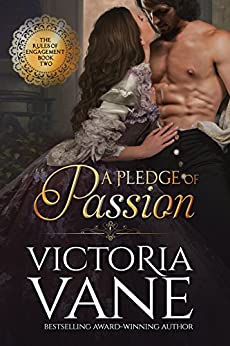 My next historical is a return to the Georgian era with, A PLEDGE OF PASSION that I wrote for the PASSIONATE PROMISES anthology. This story is special in that I revisited my very first Victoria Vane book (A BREACH OF PROMISE). Nick and Mariah were secondary characters in that story. They are now the main protagonists, although Lydia, Marcus, and Lady Russell have also reprised their roles! I think readers are going to love this story.

As for DeVere, he is my all time favorite character, and I am not finished with his world. I am planning three or four new books, but they may be on hold until 2017 due to some bigger projects I want to undertake this year.

Are your contemporary romances featuring cowboys an outgrowth of your love for horses?

Absolutely! They say write what you know! Horses and the horse world have been a huge part of my life for many years.

I’m really excited about my new, hot, contemporary, HOTEL RODEO SERIES. There are so many things that make this series unique! The Las Vegas setting is a big part of that, but the characters are very colorful as well.  My hero, Ty Morgan, in HELL ON HEELS and TWO TO WRANGLE, is a departure from my more traditional cowboys.

Ty is a flawed character. He’s a divorced playboy who loves woman—but only in single serving sizes. He also has an alcohol problem that he’s mostly overcome.  He’s got a smart mouth and talks a lot of smack about his ex-wife, but deep down takes responsibility for the failed marriage. He has countless “friends” but doesn’t let anyone get too close, with the exception of Oklahoma billionaire, Tom Brandt, his father’s business partner who took Ty under his wing after Ty’s father’s tragic death. After following too closely in his father’s footsteps, Ty leaves the world of professional rodeo to manage Tom’s Las Vegas hotel. The Hotel means everything to Ty. It’s his family and his future but Ty knows its days are numbered.

Little does Ty know that his fight will be with Tom’s investment-banker daughter, Monica Brandt. Monica has arrived in Vegas to take care of her father, which also includes taking control of his assets. She is fiercely protective of Tom, the only person who’s ever cared about her, and doesn’t trust Ty. But Tom and Ty share a dream that down-to-earth Monica can’t understand. Monica only wants to protect her father and his business interests from the cowboy she doesn’t like or trust. The relationship between Ty and Monica is nothing short of explosive!

One of my favorite snippets between Ty and Monica:

“I wanted this to work. I really did, but we just don’t have enough common ground. I admit the chemistry between us is incredible, but we burn too hot.”

“You’re right about that part,” he broke into a dark chuckle. “We’ve been playing with gun powder from the get-go. But there’s something you need to understand about gunpowder, Monica. Although it’s highly combustible, it’s also what makes fireworks. So only two things can happen here—we’re either gonna blow like a stick of dynamite or we’re gonna make some major **** pyrotechnics. Don’t know ’bout you, but I’m banking on the fireworks.”

What else can we look forward to from you?

Here’s a teaser for THE QUEEN OF KING’S PLACE:

I was educated and trained in the manners and deportment of a lady, never imagining I would one day lay claim to these epithets, but once the role was thrust upon me, rather than wallowing in self-pity, I chose to embrace my fate in the demimonde.  If I had to live a life of ill-repute, I swore to become the most celebrated courtesan in all of London. And I did, reigning supreme above them all.

They say harlots don’t get a happy ever after…I beg to differ.

Have you read anything lately you’d highly recommend? (Know you stay busy so…)

Sadly, my pleasure reading has decreased from 70-80 book a year to less than a dozen but I do very highly recommend several of the anthologies I have participated in. I am honored to be working with so many wonderful authors! These sets are all fabulous and only $.99!

ROMANTIC BEGINNINGS, ONCE UPON A TRUE LOVE’S KISS, PASSIONATE PROMISES, and SEVEN NIGHTS OF SIN (coming in March).

Victoria Vane is a bestselling, award-winning author of smart and sexy romance. Her books have received more than twenty awards and nominations to include the 2015 Red Carpet Award for JEWEL OF THE EAST, 2014 RONE Award for TREACHEROUS TEMPTATIONS, and 2012 Library Journal Best E-Book romance for THE DEVIL DEVERE series. Victoria also has a passion for historical fashion and lives in the beautiful upstate of South Carolina with her husband, two sons, a little black dog, and an Arabian horse.